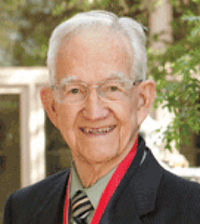 Horace Randolph (Randy) Crawford, SPE, died 16 December 2015 at age 87. He was a pioneer in fracture treatment designs and products and was honored as a JPT Legend of Production and Operations in 2009.

After graduating with a PhD in chemical engineering from the University of Texas at Austin, Crawford joined Western Company as a research associate and developed acidizing, cementing, and fracturing products and treatment designs. One of his early papers, with other coauthors, “Carbon Dioxide—A Multipurpose Additive for Effective Well Stimulation,” was published in JPT in 1963. After Western, Crawford worked for several other com­panies, including Westco Research (a Western Company subsidiary), Lone Star Gas Company’s Nipak Fertilizer, and Sanitech and Enserch Exploration.

Crawford joined Conoco in 1979, and was tasked with increasing the production rate of the company’s Gulf of Mexico oil wells. He prepared a well completion plan and developed in-house tools to teach the plan to others. The results were successful and Conoco increased the production rates and revenues from the first two platforms by approximately USD 104 million annually.

He authored several technical papers, including methods to calculate the dimensions of a fracture using the properties of the reservoir and fracture fluid. He authored six patents for technologies, including explosive charge assemblies, secondary recovery of petroleum, seismic methods, and transmission of mechanical power.

The coal seam fracture treatments he helped design for Consol Coal, Conoco’s sister company, is considered one of his greatest contributions to the industry. Still being used today, this technology allows engineers to fracture and produce the methane from coal seams before sending miners into the mine. This has made coal mining safer by reducing the methane content in the mine and released into the atmosphere, and has reduced the operational cost. For this contribution, Crawford received a Special Achievement Award from Conoco.

Crawford was passionate about education. With his wife, Louise Crawford, he established two scholarship funds—the Dr. H.R. and Louise Crawford Scholarship Endowment at Texas Tech University and the H.R. Crawford Endowed Graduate Fellowship in Engineering for graduating engineering students at the University of Texas at Austin. These have so far helped more than 100 students attend college.