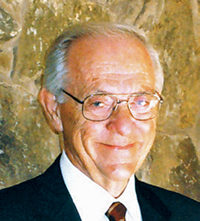 Russell became president during a turbulent time in the oil and gas industry. The OPEC oil embargo against the US was in effect and the price of oil had increased severalfold in a short span of time. SPE’s Dues Waiver program was first introduced in 1973 to support unemployed members. In spite of the difficult economic conditions, Russell successfully steered SPE in the direction of technical knowledge dissemination and individual member development, and SPE’s annual membership grew steadily.

Supported by the SPE Board of Directors and reflecting the views of the majority of SPE members, Russell opposed the unionization of professional employees in the oil business as well as SPE endorsing guidelines that would dictate the relationship between employers and professionals. In his column in the November 1973 issue of JPT, he wrote, “[SPE] must stick to its traditional role as a bulwark of professionalism and seek to be of greater value to the engineer/scientist and to the industry it serves.” Russell also reiterated the importance of educating the public and the government about the industry. In the JPT October 2007 issue celebrating SPE’s 50th anniversary, Russell said that he was proud of speaking out for the oil and gas industry with facts and that those energy education efforts paid off.

Russell made notable technical contributions to SPE and the industry. He was awarded the Cedric K. Ferguson Medal in 1962, recognizing an outstanding technical paper written by an SPE member under 36 years of age. He received the John Franklin Carll Award in 1980 and the DeGolyer Distinguished Service Medal in 1987. He published several technical papers and, with C.S. Matthews, authored SPE’s first monograph, Pressure Buildup and Flow Tests in Wells in 1967, which is considered a classic today. He served on the board of directors of both SPE and the American Institute of Mining, Metallurgical, and Petroleum Engineers (AIME) and was president of AIME in 1990. He was an honorary member of both SPE and AIME. Russell was also part of the executive structure at SPE that spearheaded the formation of the SPE Foundation.

Russell began his career with Shell Oil Company in 1955 as a petroleum engineering trainee, and in his 33-year career at Shell, held roles of increasing responsibility in production operations and exploration and production research. He was vice president of corporate planning in 1977 and vice president of production in 1980. He retired from Shell in 1987 as president of Shell Development Company, the company’s research and development organization. He became president and chief executive officer of Sonat Exploration Company in 1988 and led the company’s growth for more than a decade. In 1998, he founded Russell Companies, an independent oil and gas company based in Tyler, Texas. For outstanding leadership at Sonat and Shell in the development and application of new technologies, he was recognized with the AIME Charles F. Rand Memorial Gold Medal in 2000.

Russell graduated with a BS degree in mathematics and physics from Sam Houston State University, which he attended on a music scholarship, playing trumpet in the Houstonians Jazz Band. He also held an MS in mathematics from the University of Oklahoma. He was elected to the US National Academy of Engineering in 1982.