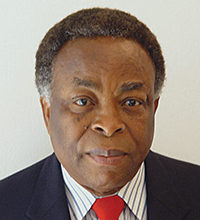 Emmanuel Egbogah, former SPE Africa Regional Director and Honorary Member of SPE, died 18 June. He was the founder and executive chairman of Emerald Energy Resources. He was a recognized authority on petroleum policy, enhanced oil recovery (EOR), stimulation procedures, and multidisciplinary team approach to field development planning and reservoir management. During his more than 35 years in the industry, he held several executive leadership and policy advisory positions. Among them, he was technical advisor and technology custodian for Petronas, EOR advisor for Libyan National Oil Corp., and petroleum engineering manager and EOR specialist at Amerigo International. From 2007 to 2011, he served as the presidential advisor on petroleum to the Republic of Nigeria.

Influenced by his friend and mentor, Walter Rose, who was a visiting professor at the University of Ibadan, Egbogah joined SPE in 1971 when he joined the university as a lecturer in petroleum technology. Since then he served in various roles at SPE and became the SPE Regional Director for Africa in 2006. His SPE involvement included being chairperson of the Distinguished Member Award Committee and member of the JPT Editorial Review Committee, Cedric K. Ferguson Medal Committee, Asia Pacific Oil & Gas Conference Steering Committee, Asia Pacific Forum Series Steering Committee, Diversity/Governance Task Force, and SPE Speakers Bureau.

The author or coauthor of 94 technical papers and two books, Egbogah received several SPE and industry accolades over the years. He received the SPE Honorary Membership in 2013, SPE Distinguished Membership in 1995, the SPE Asia Pacific Regional Service Award in 1998, the Millennium Award from the SPE Nigeria Council in 1999. In 2006 he received the National Honour of Officer of the Order of the Niger from the government of Nigeria.