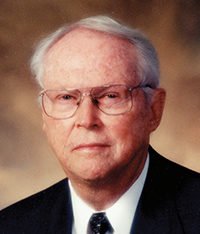 Sam Gibbs, the inventor of the wave equation method used in the rod pumping diagnostic and predictive software, and an SPE Legend of Artificial Lift, died 17 February. Gibbs earned his BS in mechanical engineering at Texas A&M University in 1954 and worked for Shell Oil Company briefly before being drafted into the US Army. Upon returning, he took a leave of absence from Shell and went back to school and earned his MS in mathematics at Texas A&M in 1960. Following graduation, he returned to work at Shell and later earned his PhD in mechanical engineering from Rice University in 1968. In 1971, Gibbs formed Nabla Corp. with his friend Ken Nolan, and his contributions revolutionized the oil industry in the field of artificial lift of rod-pumped wells. “We put the Diagnostic Technique in a computer in a truck and hauled it to the well site and did computations right there so we could hand the customer the diagnosis with a completed report right at the well site,” said Gibbs in an interview for JPT, in which he was recognized as a Legend of Artificial Lift in 2014. In 1997, Nabla was sold to Lufkin, which used Gibbs’ patent on downhole card control of pumping wells to create the SAM Well Manager, a control device for rod-pumped wells.

Gibbs held several patents, wrote and co-wrote numerous technical papers, is the author of the textbook Rod Pumping: Modern Methods of Design, Diagnosis and Surveillance, and received many awards during his nearly 50 years in the industry. He was an SPE Distinguished Lecturer during 1988–1989. The SPE Permian Basin Section elected him to their Hall of Fame in 1992. He received the SPE Production and Operations Award in 2001, and in 2011, he was inducted into the Petroleum Hall of Fame at the Petroleum Museum in Midland, Texas. Gibbs was awarded the Hearst Energy Award for Lifetime Achievement in 2016.