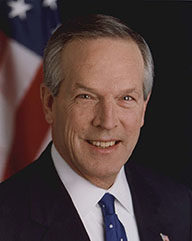 Extraction Oil & Gas announced that former US Commerce Secretary Donald L. Evans has resigned from the company’s board of directors, effective 26 July, for personal reasons. He served on Extraction’s board of directors since 2016 and was a member of the audit and executive committees. Evans was appointed as the 34th Secretary of the Commerce by US President George W. Bush in 2001, where he served until 2005. He began his career as a roughneck working on oil rigs for Tom Brown and became the CEO of the company 10 years later, continuing in that position until becoming the commerce secretary. In 1995, Evans was appointed to the University of Texas (UT) Board of Regents; he was elected chairman in 1997 and served two consecutive terms. He is a senior partner at Quintana Capital Group, senior advisor at Energy Capital Partners,  member of the advisory board of the Energy Institute at UT Austin, and chairman of the Permian Strategic Partnership. Evans holds a BS degree in mechanical engineering and an MBA from the UT Austin, and was named a UT Distinguished Engineering Alumnus and inducted into the UT Austin’s McCombs School of Business Hall of Fame in 2002.