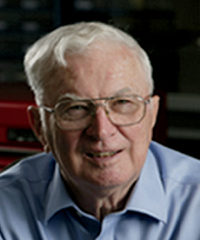 Marvin Gearhart, a pioneer in measurements-while-drilling (MWD) and loggingwhile-drilling (LWD) technologies for the oil and gas industry, and a JPT Legends of Drilling honoree, died 20 July. He was 92.

Gearhart was a pioneer in bringing digitalization to drilling. In the 1970s, the Gearhart Owen, a company founded by Gearhart and Harrold Owen, launched a major innovation in openhole logging methods by applying digital technology. The company completed and tested a new series of openhole tools and a computer system to analyze the findings. The new product line, known as Direct Digital Logging, significantly reduced the lead that the major oilfield service and supply companies had once enjoyed in openhole drilling.

Also during the 1970s, Gearhart’s company became a forerunner in MWD technology, which played a key role in enabling directional drilling by providing accurate logging measurements without a wireline. This new technology offered time savings over conventional surveying methods, which was quickly recognized. Gearhart considered the development of MWD equipment as a high point in his career because of the visible impact it has had on the exploration and production world since.

With these technology innovations, the Gearhart Owen company grew globally and, at its peak, was operating in 27 countries around the world. It had more than 13,600 employees in 1984, and was considered the third-largest service company at that time.

Following the oil price crash of 1986, the company was acquired by Halliburton in 1988. Gearhart  later founded Rockbit International in 1989 and specialized in building drilling tools for the next 17 years. After the non-compete provision with Halliburton ended, he founded the Gearhart Companies in 2005, which specializes in drilling tools and systems designed for vertical and horizontal drilling.

During his career of more than half a decade and through the companies he created, Gearhart was widely known in the industry for his warm leadership style. Many employees of his companies fondly remember how he knew every employee by name.

Gearhart was an SPE Distinguished Lecturer on the “Measurements While Drilling” topic in 1981 and a member of the Drilling Engineering Awards Committee in the early 1990s. He was recognized as a JPT Legends of Drilling in 2008 and awarded the Anthony F. Lucas Gold Medal, which recognizes achievement in improving the technique and practice of finding and producing petroleum, in 2014. He was conferred SPE Distinguished Member status in 2014. In 2016, the Society for Petroleum and Well Log Analysts recognized Gearhart with the Pioneer Award.