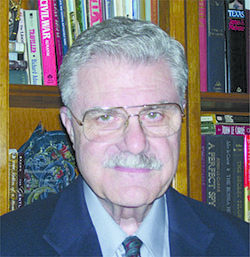 Marvin LaVerne Katz, who served as 1980 SPE President and was instrumental in helping SPE become an international association, died 22 November. He was 83.

Katz began his career at Sinclair Oil Corp. in 1960 as a research engineer and systems administrator before joining Atlantic Richfield Company (ARCO). It was there he found great success as an executive, serving in numerous leadership roles focused primarily on exploration and production research, long-range planning, and operations support. He left ARCO in the late 1980s and joined Chief Petroleum Company, retiring in 1992 as vice president of engineering.

As 1980 SPE president, Katz made significant contributions to the internationalization and growth of SPE. During the 3 years of his presidential rotation and travel, both the industry and SPE were in a period of rapid transition. The Society was working actively on becoming an international organization, and as a separate entity from the parent organization, the American Institute of Mining, Metallurgical, and Petroleum Engineers (AIME). Some members wanted SPE to be more active in promoting US national energy policy. But Katz and others steered the Society toward internationalization and emphasized that SPE should continue to focus only on technical-information dissemination and professional affairs. These efforts led to the growth of SPE internationally and SPE was incorporated separately from AIME in 1985.

A significant inflection point in SPE’s history, the internationalization led to SPE sections being  founded across the world. “It is truly gratifying to see how international in scope SPE has become,” said Katz, recalling his years as president in a 2007 JPT article celebrating SPE’s 50th anniversary.

Katz was a member of the Coordinating Subcommittee and chairman of the Technology Task Group of the National Petroleum Council's Committee on Enhanced Recovery Techniques for Oil and Gas in the US, and served as a member of advisory committees to the Texas A&M and University of Tulsa departments of petroleum engineering. He held BS, MS, and PhD degrees in chemical engineering from the University of Michigan.