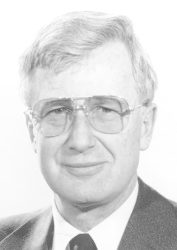 Jacques Bosio, SPE’s first non-American President and a pioneer in horizontal drilling, died 14 January. He was 85.

Bosio, who retired in 1994 as deputy R&D director at Elf Aquitaine Production in Paris, served as SPE President in 1993, the first person outside the US to hold the position. His election came at a time when SPE was expanding internationally.

“SPE was perceived as a US professional society,” Bosio said in a 2007 JPT article celebrating SPE’s 50th anniversary. “Not very many members of the successive SPE Boards had realized that geology has no borders and that the center of gravity of the oil business was not in Texas anymore but traveling east, drawn by the North Sea and especially the Middle East. But some were visionaries.”

An SPE member since 1984, Bosio was a leader in section, regional, and Society-wide activities. He was cofounder of the SPE France Section and served a 2-year term as section chairman. Later he was elected to the SPE International Board of Directors and, after serving his presidential term, became a trustee of the SPE Foundation. Bosio was a recipient of the SPE Distinguished Service Award (1998) and was an SPE Honorary Member, the association’s highest honor. He was an SPE Distinguished Lecturer on the topic of horizontal drilling during 1987–1988. In addition to SPE, he was active in the World Petroleum Congress as a member of its Technical Scientific Committee.

“Jacques was a fantastic mentor at the beginning of my SPE activities and his enthusiasm was very stimulating,” said Alain Labastie, who served as 2011 SPE President. “He was a very open-minded and international person, but kept a French flair.”

Bosio is perhaps best known for his work in advancing horizontal drilling.

“The Soviet Union pioneered horizontal wells in the late 1960s only to turn its back on furthering the development of the practice in favor of vertical wells that were easier and faster to drill,” wrote Henry Edmundson in his 2015 book, Groundbreakers: The Story of Oilfield Technology and the People Who Made It Happen. “But the mantle was picked up by Jacques Bosio, a drilling engineer with French oil company Elf Aquitaine, which needed horizontal drilling to intersect fractures and increase production from a karst reservoir found off the Italian coast, the Rospo Mare field.

“In 1981, for twice the cost of a vertical well, horizontal drilling was sanctioned. The first well would bring in 3,000 B/D—more than 20 times its offset vertical well. By the mid-1980s, horizontal drilling was seeing wider adoption as a way to target thin oil and gas reservoirs in Texas, the Middle East, and the North Sea. Operators had known about these skinny hydrocarbon-bearing layers for years—now they had a way to contact them with enough surface area to make money.”

The application of horizontal drilling got the attention of oil companies around the world. “This is something I am very proud of,” he said in another JPT interview. “We were invited to Texas to teach some colleagues in a large company how to drill a horizontal well. Can you imagine a Frenchman teaching a Texan how to drill a well?”

He was also active in developing other offshore areas, including working on the first automatic subsea production system at a field in Gabon.

Bosio held the position of deputy R&D director at Elf from 1979 until his retirement in 1994 and took on additional duties as vice president of E&P technical cooperation at Elf in 1990. He worked as an evaluation consultant for E.A. Polumbus and Associates before joining Elf in 1963.

After his retirement, Bosio became a consultant. One of the projects he worked on involved converting a naval construction facility in the city of Brest, at the western tip of Brittany, France, into an R&D and industrial site for the deep offshore industry.

Bosio earned an MS degree in mechanical engineering from Ecole Centrale in Paris in 1957 and studied reservoir engineering at the University of Texas at Austin during 1957–1958 on a Rotary International graduate fellowship.