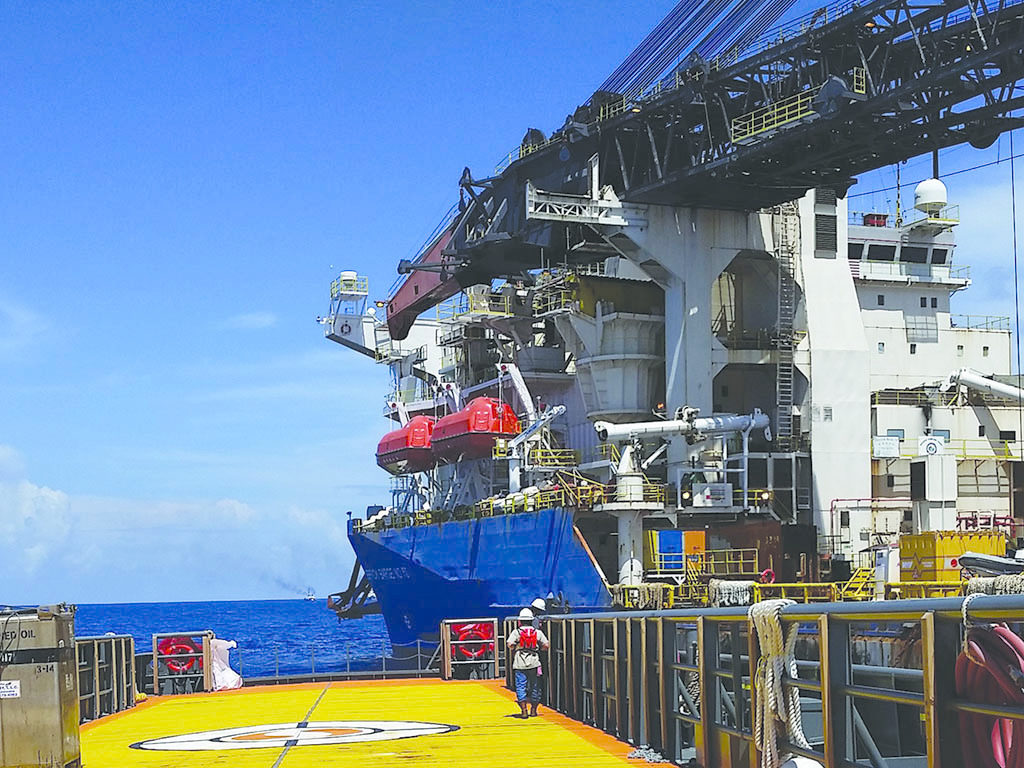 Photo courtesy of InterMoor.
The Intermoor crew returns alongside McDermott’s DB 50 after checking on the tow of the Anadarko Red Hawk spar en route to its final reefing site.

In 2004, the Red Hawk cell spar was installed in 5,300 ft of water in the US Gulf of Mexico (GOM). Then owner Kerr McGee heralded it as the world’s first cell spar. Ten years later, it remained the only cell spar fabricated, and it again made history as the deepest floating production unit (FPU) ever decommissioned in the GOM.

The Red Hawk was designed to produce natural gas from subsea wells in Garden Banks (GB) Block 877 for at least 20 years. It had excess deck space and weight capacity to add oil processing equipment and serve as a production hub for potential new discoveries in the area.n 2004, the Red Hawk cell spar was installed in 5,300 ft of water in the US Gulf of Mexico (GOM). Then owner Kerr McGee heralded it as the world’s first cell spar. Ten years later, it remained the only cell spar fabricated, and it again made history as the deepest floating production unit (FPU) ever decommissioned in the GOM.

Because its production came from subsea wells, the Red Hawk had no dry tree facilities, which was an unusual design for a spar. Generally, an advantage of a spar-based production solution is the dry tree option. It was a third-generation spar design that followed the classic spar and the more common truss spar. It was also one of the first FPUs to feature polyester mooring lines.

Though the facility paid out as anticipated, the two original gas wells turned out to be the only producers. In 2008, 4 years after coming on line, the wells watered out. Anadarko, which inherited the facility when it acquired Kerr‑McGee in 2006, realized the Red Hawk had a lot of life left in it and began shopping around for another opportunity.

If there were a subsea field close enough to GB 877, the spar could be towed intact and anchored at a new location. The company spent the next 4 years shopping the facility around internally and externally, but did not find the right fit.

During that time, a crew of seven manned the facility. Ryan Kavanagh, facilities engineer of GOM deepwater facilities at Anadarko, said that the crew spent most of its time on routine maintenance, safety testing, and conducting quarterly inspections.

In 2011, the wells were permanently plugged and abandoned. Kavanagh said the decision to decommission the Red Hawk was driven partly by the fact that Anadarko’s lease on the block expired in 2012, combined with other more competitive options in the portfolio and a lack of viable tieback opportunities in the area. “With the lease expired, and the wells depleted, no one was going to take it as is,” Kavanagh said.

Well abandonment is a critical moment in the life of an FPU because once the wells are plugged, and there is no throughput, in some instances, the clock begins ticking on the deadline for decommissioning the facility.

Fortunately, because of the length of time that the Red Hawk had been off line, the company had plenty of opportunity to plan for decommissioning. It was able to complete the critical scope of the process in 24 days, Kavanagh said. The work was done in late August, which “is considered peak hurricane season,” he said. Despite two weather events, crew members worked around the clock to complete the work.

Fishing for a Solution

When a spar hull is installed, its component parts are assembled onshore, and it is “wet towed” horizontally to the installation site, where it is righted and moored in place.

In considering the reversal of the process in the decommissioning of the FPU, it was determined that the cost would be very high, the process would be time-consuming, and the question remained of what to do with the hull once it completed the long journey back to shore.

Kavanagh said Anadarko had a better idea. Drawing on its experience working with Texas and Louisiana on the rigs-to-reefs program with previous fixed platforms, the company identified a viable location only 70 nautical miles from GB 876. The relative short distance meant that the hull could be ballasted up and towed vertically to the site. Besides proximity, another critical advantage to the location in Eugene Island (EI) Block 384 was its depth. At 430 ft, this location was just deep enough for the 560-ft spar to access safely.

Two production jackets had already been reefed in this block, meaning the fixed-bottom platforms were cut off well below the water line and left in place as a home for marine life.

A question was how deep in the water does the marine life live. The abandoned jackets rise up through most of the water column, but a cell spar lying on its side is 64 ft in diameter. To confirm the presence of marine life in the lower 64 ft of the water column, remotely operated vehicles (ROVs) carried out a surveying mission and brought back footage showing an active marine community near the seabed.

This was particularly good news. As the first spar that would be used in the rigs-to-reefs program, the Red Hawk would offer a unique, cave-like environment for fish. “That’s something unusual in the Gulf,” Kavanagh said.

The decommissioning of the Red Hawk began with the removal of spare facilities, such as utilities, fire pumps, and water pumps, and anything that could be safely disconnected in advance, he said.

“We were getting the topsides ready to remove in one piece,” Kavanagh said.

“The three steel catenary risers that handled production in and out of the facility, as well as one controls umbilical. These were flushed clean, flooded, and left in place.”

The company acted as its own general contractor on this project. InterMoor developed the engineering procedures for the hull decommissioning and tow, removed the mooring lines, and oversaw the ballasting and deballasting of the hull. Anadarko brought in a number of vendors for support work, including McDermott, whose DB 50 derrick barge performed construction support and provided accommodations for the 80-plus workers on the project.

The Versabar’s VB 10000 heavy lift vessel was contracted to pull the topsides in a single lift. Edison Chouest Offshore’s anchor handling vessel Kirt Chouest was brought in for the removal of the mooring lines.

Kavanagh said it was interesting to see the same companies working on the decommissioning project, since many of them were involved in the installation a decade earlier. A number of crew members, including the captain, on the Kirt Chouest returned to the Red Hawk, as well as several engineers from InterMoor.

Although the steel catenary risers and subsea kit were left in place, the mooring lines were recovered. Kavanagh said the 10-year-old chain-polyester-chain lines had no resale value, but were of scientific value. Because the Red Hawk was one of the first FPUs to incorporate polyester mooring lines in the GOM, Anadarko saw this as an opportunity to examine the materials after 10 years of a 20-year design life. Knowledge gained from examining samples of the lines could help shape future specifications and regulations.

InterMoor oversaw the removal and transport of the hull and was involved, as part of Technip, in the installation. Todd Veselis, general manager of permanent moorings at InterMoor, said that the engineering manuals for the project sat on the shelves of his office in Houston. “The knowledge we brought to (the project) helped. It’s also nice that we had all the installation manuals and mooring particulars already in house,” he said.

Before the VB 10000 could be positioned over the facility to remove the topsides, the spar had to be ballasted down from 50 ft to 20 ft of freeboard. This would be the first time the heavy lift vessel had pulled topsides from a floating facility. To further complicate matters, the cell spar has an unusual air-over-water ballasting system.

To ballast up, compressed air was pumped into the top of each cell, displacing water in the bottom of the cell. If the air was bled off, it drew the water in to deballast. Also, none of the pumps involved in ballasting the hull could be attached to the topsides, since these structures were being removed.

InterMoor installed pumps, manifolds, and hoses for both air and water on top of the hull, connected to a remote ballasting system staged on the DB 50. The hull was ballasted down to its minimum freeboard of 20 ft (and held at this depth) for the topside lift, and then ballasted up to 160-ft freeboard for the trip to its destination.

Before the hull could be ballasted down, the six-point mooring system had to be slacked off. This too was tricky to do without access to the topsides equipment, Veselis said. The chains at the top of the mooring lines fed into a single, 800-ft master “work chain” controlled by a single windlass, he said. The system would need to be bypassed for the mooring disconnect since the topsides would not be in place at that time.

The solution was to cut the work chain into three sections and attach these to the mooring chains on one side of the hull. The added scope slacked off tension on the entire system. With the additional slack in the mooring lines, the hull was ballasted down, and the topsides removed and placed on a barge headed for shore.

With the topsides out of the picture, the mooring system was disconnected by the DB 50, handed off to the Kirt Chouest, and temporarily laid on the seabed. The lines would later be recovered by the Kirt Chouest. In the meantime, the pumps on the DB 50 deballasted the hull to a draft of 400 ft, and tugs towed it away (the 400-ft draft was critical, since the EI Block 384 location was only 430 ft deep).

Once the spar was towed on site, it was ballasted down until it rested on the seabed. Rope access specialists rappelled down the face of the exposed spar, cutting precise holes (about 5-ft square) at various points in each cell. The goal was to flood the cells in a predetermined sequence that would tip the spar into a horizontal position.

The facility had minimal machinery, no hydrocarbon storage, and never contained anything but air, water, and magnetite for ballast.

With the holes cut into the hull and the rope access team recovered, two tugboats worked to tip the spar, allowing water to pour into the holes to gradually tip it horizontally as it sank. In less than 10 minutes, the hull was out of sight and on its way to the bottom. The tugs went off power, but their towlines remained connected to the hull until an ROV could disconnect them.

With a few exceptions, including weather delays, the operation went off without a hitch, Veselis said. “We had a pretty extensive planning and prep phase,” he said.

Perhaps the Red Hawk success is a preview of things to come. A great deal of practical experience was gained with the decommissioning project, and the lessons learned will benefit the industry. As Kavanagh put it, “This looked good on paper, but now, we know for sure how to go about decommissioning one of these facilities.”

ExxonMobil is evaluating additional development opportunities in the Stabroek Block with plans for five drillships operating offshore Guyana by the end of 2020.