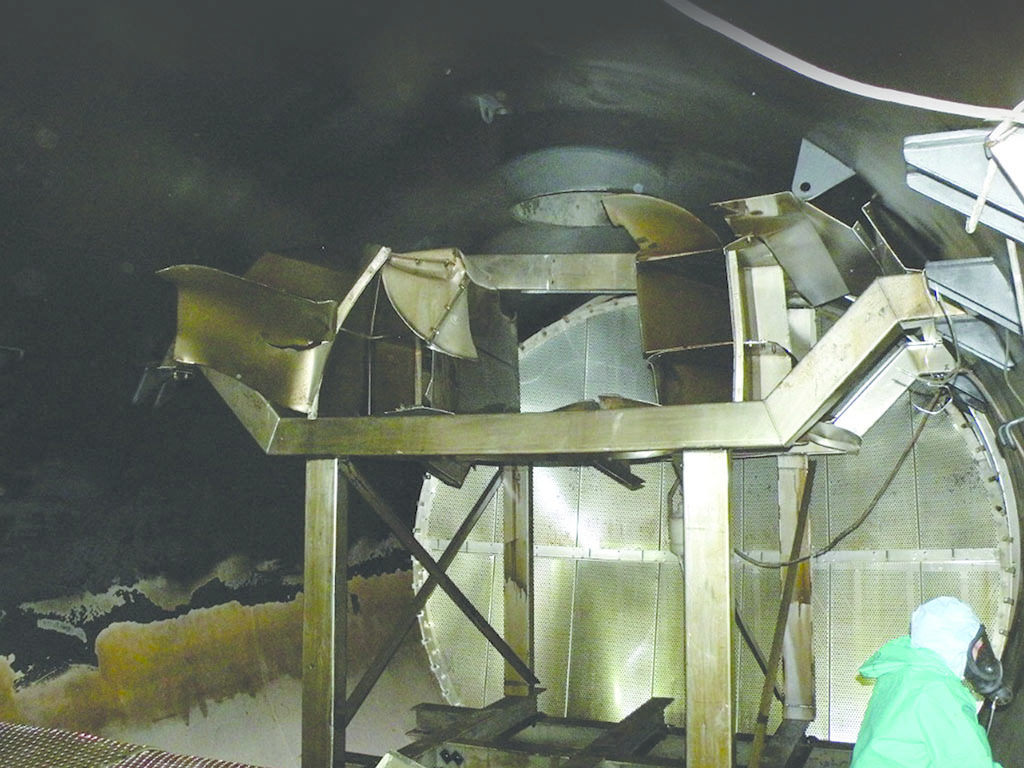 Photo courtesy of Maxoil Solutions.
In mature field design upgrades, the separator internals may need to be studied and replaced based on current fluid properties and production rates.

The development and upgrade of mature facilities is ultimately driven by the significant shift in the composition of the arrival fluids, mainly the increasing water cut and solids production. In many cases, the routing of new well discoveries to these facilities, or the change in characteristics of the crude with the decline in field production, exacerbates this shift.

Consider a typical production profile shown in Fig. 1. It has the characteristic steep increase in production at startup, followed by a maximum production plateau for oil and gas, then a gentle decline to the point of abandonment. In contrast, produced water (and sometimes sand) production generally increases, especially if water injection is installed to enhance oil and gas production. It is this idealized profile that life-of-field operating design cases are based on, following initial reservoir appraisals.

These challenges will be discussed and a step-by-step process will be proposed to optimize the design of late-life facilities and maximize the recovery of hydrocarbon.

The trends shown in Figs. 2 and 3 highlight the outcomes of facility upgrades based on the timing of the modifications. At first glance, mature field upgrades seem to be a poor value for money compared with early field modifications in which a relatively small increase in production can produce a significant increase in recovery over the life of the field. Mature field upgrades often suffer the disadvantage of causing a disproportionate increase in produced water throughput. For this reason, an operator’s attitude toward mature field management is generally one of minimum investment and breakdown maintenance.

Although late-life oil production is significantly lower than peak production, achieving a modest increase in production can significantly increase revenue, extend economic field life, and improve field recovery. However, achieving such results requires a mind-set that considers the mature facility as an asset that still offers a potential for achieving good economic return on investment, rather than viewing it as a spent asset being run on a shoestring.

While the effects of production profile changes are witnessed across the facility, upstream separation vessels, such as slug catchers and first stage separators, are most significantly affected.

As an oil field matures and water cut increases, separation is affected by increasing emulsion viscosity until an emulsion inversion point is passed. For mature field operation and upgrade, water production dominates oil recovery and the separator is needed to operate beyond the limit of its original produced water design. At this point, the handling of increased solids production, changes in fluid properties, and changes in chemical treatment requirements require a new approach.

Consider a scenario in which well fluids are routed directly to the first stage separator, wherein bulk oil, gas, and water separation is achieved. Oil carryover to the second stage separator includes solution gas and entrained water, which are further separated in this unit following heating and pressure reduction (Fig. 4).

Although the key aspects of mature field upgrades are highlighted in this way, it must be understood that this is a facilitywide issue that must be addressed holistically.

As the production profile of a field changes throughout the life of a facility, updating a separator data sheet to reflect new flow rate requirements may be too simplistic an approach, which does not consider all pertinent design inputs. Ultimately, this results in an inadequate solution and a missed opportunity for achieving optimal separator performance.

The following outlines a five-point holistic approach that achieves substantiated specifications for system upgrades, thereby allowing operators to confidently progress with mature facility modifications. This process is illustrated in Fig. 5.

Using nucleonic trace testing and scanning methods, actual residence times, and flow patterns inside a separator can be investigated, which will identify dead spaces within a separator or short-circuiting of flow through the vessel. This provides valuable information on the performance of existing separator internals, and thus assist in the specification of retrofit internals and hardware.

In mature field design upgrades, the separator internals may need to be studied and replaced based on current fluid properties and production rates. For early field production, separators may contain minimal process internals, such as inlet devices, baffles, weirs, and vortex breakers.

When upgrading for mature field operation, the correct selection of process internals is critical (Fig. 7).

For a successful separator upgrading, updated operating procedures must support modifications to the internals. Operators often develop inconsistent ways of reacting to abnormal and upset conditions, introduced through

Such inconsistencies can affect process uptime and operating efficiency. Conducting an audit of how each shift operates a production facility can enable the creation of “best practice” operating procedures for achieving optimum system uptime and production.

When originally developed in the mid-1970s, a large onshore oil field produced fluids comprising medium crude oil with low water cut and few solids, which the production facilities were consequently designed to handle.

Recognizing that previous upgrades had never included a rigorous investigation of fluid properties, chemistry, and operational characteristics of the existing facilities, the operator commissioned a full site investigation of the fluids and performance of the process system. If the results supported the case for equipment and system upgrades to enable the achievement of the crude oil production requirement, this route would be taken. If the recommendations of the investigation could not be supported, new production facilities would be installed.

The onshore facility gathers inlets from a range of reservoirs and processes through multiple identical trains arranged in parallel. Each train consists of a high-pressure, three-phase first stage separator, with the water offtakes routed to a dedicated produced water treatment system. The wet crude is passed downstream to a two-phase degasing separator to remove solution gas. The liquid outlet is processed through a final electrostatic coalescing vessel to further dehydrate the crude and achieve export specification.

A simplified process flow diagram detailing the configuration of the liquid processing trains contained at the facility is shown in Fig. 8. The methods used to investigate the fluids and the performance of the process system are shown.

The five-point approach illustrated in Fig. 5 was applied during the site investigation and subsequent analysis stage. The results are as follows:

The solids issues highlighted across the facility were identified as the root cause of the separation problems, and were ultimately a result of the insufficient solids management strategy. Furthermore, the existing first stage separator internals were deemed to be poorly suited for the high solids content and low viscosity crudes.

The recommended modifications to the first stage separators fell under two categories.

The recommended plant upgrades were justified based on hard data gathered rather than best estimates. The sampling program outlined the overall system performance and pinpointed key issues, while theoretical separator modeling predictions were supported by nucleonic tracer studies and calibrated with historical data.

The existing facilities were deemed suitable for processing the projected increase in system throughput, requiring only relatively minor capital expenditure to adequately upgrade the current equipment. This equated to significant savings relative to the multibillion-dollar new production facilities option.

The economics of initial facility development budgets can constrain the operation of mature oil and gas processing facilities. Upgrading such systems is a fundamental requirement for achieving acceptable performance and ultimately can extend the economic viability of the asset, in turn increasing profitability.

Separator process internals and operating practices must be suitably modified to mirror the significant shift in an aging facility’s operating envelope because correct upgrading of internals can greatly improve the separability of the incident fluids. These crucial modifications must be verified by an extensive on-site analysis, whether by means of emulsion testing, system mapping, or process diagnostics. An all-encompassing approach will ultimately maximize hydrocarbon recovery from mature assets.

While this article has focused on crude oil separator upgrades for handling late-life field production, it must be remembered that the upgrades have to take a holistic perspective of the complete crude oil, hydrocarbon gas, and produced water processing system requirements. It is only by considering the entire facility that successful late field life production can be correctly redesigned for maximized hydrocarbon recovery.

Equinor and the Snorre and Gullfaks partners have made a final investment decision for the Hywind Tampen offshore wind farm development. By reducing the use of gas turbines, the project helps cut CO2 emissions by more than 200,000 tonnes/year.

How To Design an Unmanned Minimal Floating Platform

Unmanned minimum facility platforms are a reliable alternative to traditional wellhead platforms or subsea installations, and the technologies enabling simpler designs have evolved.