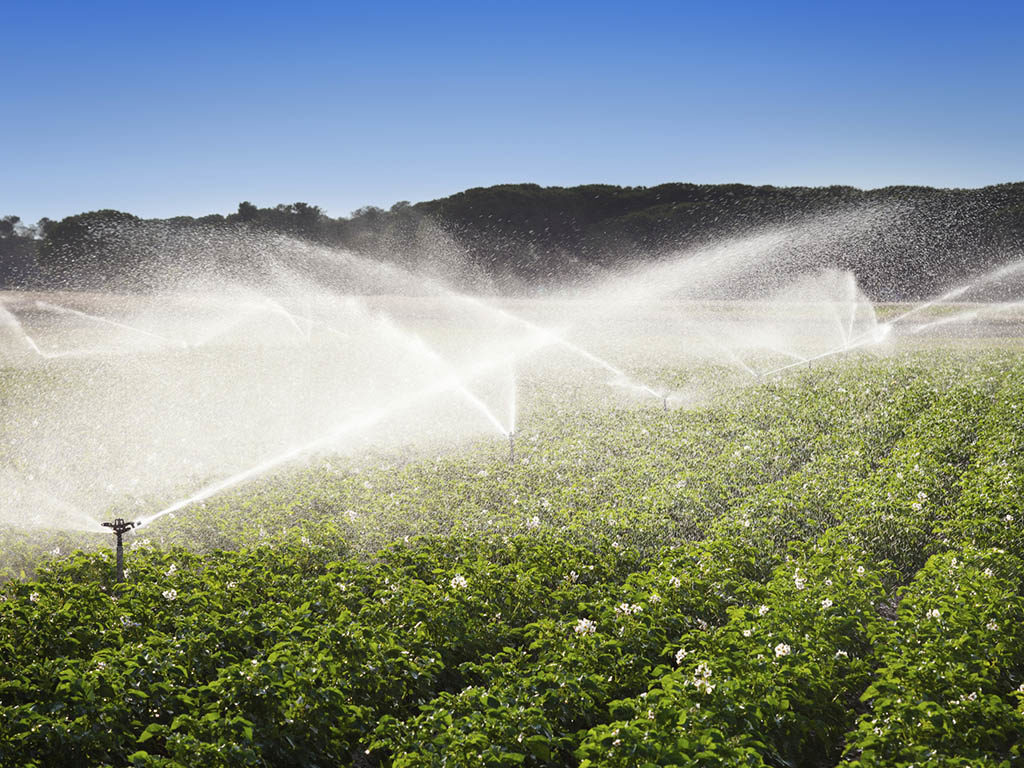 Market dynamics and costs drive the search for solutions, and the California water market is an active example. The scarcity of water, transportation and disposal costs, and regulatory scrutiny of injection into disposal wells have brought together oil and gas operators and a water district to find alternative uses for waste water. Drought conditions have improved the economic feasibility of innovative projects.

The Kern Tulare Water District in California is working with partners California Resources, Hathaway, and Day Break Oil and Gas to develop a water reservoir and pipeline system that would store and transport 6,000 acre-ft per year of treated flowback and produced water to local farmers for crop irrigation. (An acre-ft of water is equivalent to 43,560 ft3 or a volume of water covering an area of 1 acre by 1 ft deep.)

Working with the California Independent Petroleum Agency, the district applied to the US Department of Agriculture’s Regional Conservation Partnership Program (RCPP) for a USD 7.5 million federal grant to help pay for the proposed USD 18 million system. Although RCPP did not select the project as a grant winner in last month’s decision, “the program is still going forward with the pursuit of other grant funding opportunities,” Steven Dalke, general manager of the Kern Tulare Water District, said.

Under the district’s plan, the oilfield waste water that meets quality standards would be blended with fresh water for irrigating crops tolerant of mildly salty water such as pistachios.

Dalke estimated that the project could save the three oil producers and 90 participating farmers approximately USD 3.5 million annually, partly because of lower transportation and disposal costs.

California Resources is the top producer in the state at 188,000 BOED, of which most comes from the San Joaquin and Los Angeles basins. A spin-off from Occidental Petroleum last year, the company provides more fresh water to the state than it consumes in completion and waterflood operations. Its water recycling and treatment facilities have enabled it to become a net supplier of water to agriculture in the state. The company’s operations in the San Joaquin basin supply more than 43 million bbl of water annually for agriculture.

The interest in alternatives to the injection disposal of waste water has grown in California after the water prices on the open market recently skyrocketed to USD 1,300 per acre-ft, and the price of water treated by Chevron and transported by a pipeline to a water district remained less than USD 60 per acre-ft.

Chevron built a 30-in. diameter, 8-mile long pipeline in 1994 to convey produced water from the Kern River oil field in the San Joaquin Valley to the Cawelo Water District (CWD) for use in the irrigation of almonds and pistachios. In 2007, the company replaced the pipeline with a 42-in. polyurethane-lined and coated steel piping in a USD 40 million project (Fig. 1).

Chevron is the No. 2 producer in California at 166,000 BOED. For every barrel of oil produced in the Kern River oil field (70,000 BOPD), the process generates 10 bbl of water (a total of approximately 760,000 BWPD). Some of the water is used for steamflooding to produce the heavy oil. More than half of the water is treated and transported by the pipeline to CWD, which over the past decades has been approximately 30,000 acre-ft per year. Because the produced water is briny, it must be diluted with fresh water to make it suitable for irrigation.

Before the severe drought conditions in the region, Chevron’s Kern River field facility provided approximately 25% of CWD’s total water supply. Currently, the number is closer to 50% as other sources of water “dry up.” CWD purchases the water from the operator for approximately USD 30 per acre-ft, which is roughly the reimbursement for the transport, the company said.

Testing the Waters for Cost and Efficiency

Vaquero Energy will provide a pilot site for the treatment of produced water for steam injection and irrigation water for California’s Central Valley. Wyatt Shipley, energy operations manager at Vaquero, said the produced water from the company’s cyclical steam stimulation facility will be used in the field testing of OriginOil’s electro water separation (EWS) process.

Bill Charneski, president of the oil and gas division at OriginOil, said Vaquero is looking for an alternative to its treatment of water, which currently involves the addition of chemicals in five stages, including the use of a water softener to make the finished product suitable for reuse.

The EWS, a modified electrocoagulation-flotation system, is a first-stage water cleanup system designed for use after a three-phase separator for the removal of total suspended solids and nonsoluble organics such as oil, algae, and biological material

Charneski said many electrocoagulation (EC) systems use arrangements of parallel sealed plates. The EWS design uses a hollow tube as the cathode and a rod anode inside the tube. The annular distance between the tube and the rod is narrow, which creates a high flow rate. He said the reactor tubes can use mixed metal oxides (MMOs) derived from noble metals and are interspersed within the process flow (Fig. 2).

MMO anodes historically have been used in the production of chlorine and oxygen and are available as tubes, plates, and screens. The use of titanium substrates onto which oxides such as iridium or ruthenium are synthesized as coatings make the otherwise rare metals more affordable and longer lasting, he said.

The MMOs remove heavy metals and long-chain hydrocarbons, and disinfect bacteria, Charneski said. The process can be controlled by a selection of the anode in the reactor tube, or by using a combination of anode reactor tubes.

The first step in the process is the aggregation or coalescence of the organics in solution to increase the particle size for improved flotation. The flow of water is brought to a vortex phase by a pipe design that forces the material in the water to blend and break up into smaller clusters. The small particles reform into large conglomerates through a sequence of catalytic anodes. The ratio of aluminum to MMO anodes is approximately 50%.

The product is expelled into a lower pressure zone where it is flocculated by hydrogen and oxygen bubbles generated by a blend comprising 25% aluminum anodes and 75% MMO.

The clean water is drawn off for further handling by media filtration and ultrafiltration or other membrane technology, reverse osmosis, or distillation.

The EWS has been field tested in light oil reservoirs in west Texas and natural gas fields in western Colorado. In Texas, the system was operated at a saltwater disposal wellsite provided by STW Resources. The company reported that the system ramped up at startup to 1,000 BWPD and achieved a 99.8% reduction in turbidity on flowback water from various sites around Midland, Texas.

In Colorado, the technology was used to treat flowback and produced water volumes of 1,000 B/D during large-scale testing at a saltwater disposal well. The company said the system showed more than 99% removal of turbidity, suspended solids, and oil from the saltwater disposal well influent stream. The specific energy consumption averaged 0.22 kWh per bbl of water including pumping and membrane energy, which amounted to USD 0.03 per bbl at USD 0.15 per kWh.

The tested system was OriginOil’s Clean-Frac, which comprises the EWS and TriSep’s iSep ultrafiltration membrane system to provide downstream polishing. Charneski said the company partners with Dow Chemical and TriSep to determine the best options for end-to-end treatment.

Gulf Energy, an oil service company with customers across the Arabian Peninsula, purchased the first commercial scale Clean-Frac system last year for its hydraulic fracturing market. The USD 1.4 million system will treat flowback and produced water at a volume of 5,000 BWPD.

Yasser Al Barami, chief commercial officer of Gulf Energy, said, “We intend to build future units ourselves based on the design of this first unit, but we decided it was prudent to purchase a complete first system which we will mount on a mobile platform.”

A simple electrocoagulation (EC) reactor is made up of an anode and a cathode. When a potential is applied from an external power source, the anode material undergoes oxidation, while the cathode is subjected to reduction or reductive deposition of elemental metals.

A two-electrode EC cell is unsuitable for wastewater treatment, because the use of electrodes with a large surface area is required to achieve a sufficient rate of metal dissolution. Instead, performance improvement has been achieved by using EC cells in parallel or series connections to build reactors.

A parallel arrangement comprises pairs of conductive metal plates (horizontal or vertical, short or long, perforated or nonperforated) placed between two parallel electrodes and a direct current power source. In a monopolar arrangement, each pair of sacrificial electrodes is internally connected with each other and has no interconnections with the outer electrodes.

In a series arrangement, a higher potential difference is required for a given current to flow because the cells connected in series have a higher resistance. The same current flows through all the electrodes. In parallel arrangements, the electric current is divided between all the electrodes in relation to the resistance of the individual cells.

Tube reactors are also used. Solid reactors use two concentric tubes as the sacrificial electrodes, which are contained within a third, nonconductive tube. Perforated tube reactors use perforated inner or outer tubes or both.