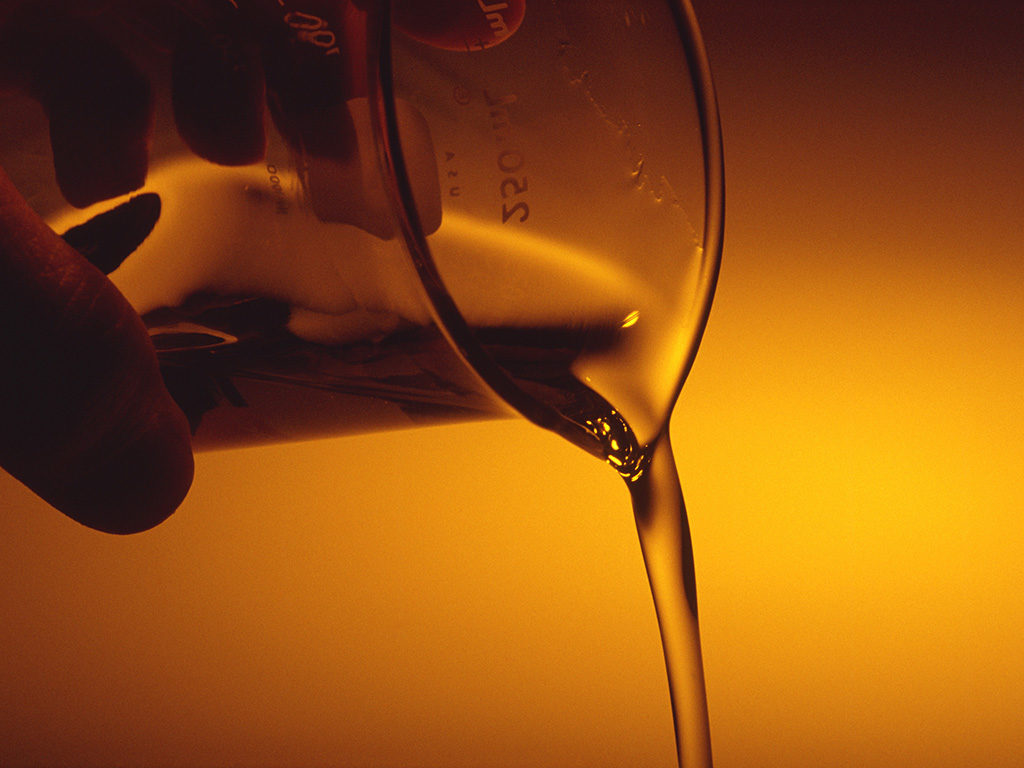 Hydraulic fracturing solutions use a gelling agent known as guar gum. Guar beans are grown in a number of countries, including the United States. The endosperm of the guar bean is ground to produce an off-white powder known as guar gum (guar). Guar acts as a gelling agent, which can be crosslinked by adding additives, such as barium, to tailor the molecular weight of the guar solution.

Crosslinking the guar increases the viscosity of the solution, which results in a gelatinous material having sufficient surface tension to transport a proppant (e.g., sand), which is used to maintain cracks and fissures in an open condition in the geological layers to allow oil and gas to flow to the collection well.

Once the fracturing solution and the proppant have been pushed out into the well area being fractured, additives, typically enzymes, are injected into the well to reduce the viscosity of the guar, leaving the proppant in place and allowing the guar gum solution to flow back out of the well.

Flowback water typically has guar gum concentrations as high as 1.0 vol% (10,000 (mg/L). After flowback and once the well is in production, the guar continues to be discharged in lower concentrations as the well produces additional water with the oil or gas product.

Removal of guar from produced or flowback water has proven to be difficult due to its natural affinity to bind with other materials, leading to the quick and excessive fouling of filter media. Therefore, treatment of flowback and produced water that contains guar, for reuse or disposal, has become an important concern to petroleum companies and the general public.

Testing the Effectiveness of Mechanical Filtration

To evaluate the potential of effective guar removal using mechanical filtration, pretreatment processes were performed on flowback and production water with guar concentrations from 50 mg/L to 6,000 mg/L. The desired results of the pretreatment tests were to process the pretreated water through various microfilter systems and a reverse osmosis (RO) unit without prematurely or irreversibly fouling the filter media, thereby making the filtration process a viable treatment for produced and flowback water.

A laboratory analysis for guar used during testing yielded strictly a quantitative value and no qualitative information. The analysis merely determined the concentration of guar, but did not determine if the guar existed in a long chain structure or had been broken into shorter chain structures.

The removal of guar from produced and flowback water is dependent on the status of the crosslinked structure and the concentration of suspended solids that are present or can be precipitated by a pretreatment process.

Pretreatment of Produced Water With Low Concentrations of Guar Gum

Produced waters with suspended or dissolved solids concentrations ranging from 50 mg/L to 1,000 mg/L and containing guar in concentrations less than 300 mg/L were treatable with the addition of a flocculent, such as ferric chloride, in dosing rates ranging from 10 mg/L to 200 mg/L. Additional chemistries generally required during pretreatment are oxidizers in the form of sodium hypochlorite (bleach) and sodium hydroxide (caustic) to adjust the pH.

The oxidizer provides the following benefits:

Once the chemistry has been added, providing sufficient reaction time before the pretreated water enters the next phase of treatment is critical to the successful treatment of this type of water. Generally, a 20-minute contact or reaction time has been found to be effective with water that is 60°F or warmer. Waters at lower temperatures require additional contact or reaction time. Mixing the pretreated water by aeration or mechanical mixers was found to be the most effective compared with the use of inline mixers that provided limited mixing, leading directly to the next treatment phase failing to provide sufficient reaction or contact time.

Due to the surface tension produced by the guar and other flowback water additives, chemicals added during pretreatment needed to be carefully selected to prevent foaming and scaling. Chemicals containing sulfides and sulfates, which have a very low solubility rate, should be avoided because of their potential for scaling. Scaling can “plate out” within pipelines, filters, pumps, and other equipment in a matter of days, and if insoluble, the equipment may not be cleanable, thus incurring replacement expenses. Additionally, foaming from chemicals can overflow tanks and be a nuisance to control.

Generally, the sludge generated by this process will settle, allowing the particulate to be separated from a majority of the water by gravity and processed through a filter press or other sludge removal equipment.

For a typical treatment system processing 5,000 B/D of produced water, the sludge generation is estimated to range from 13 ft3/D to 175 ft3/D with a filter cake at 20% solids. The amount of sludge generated is a function of the amount of suspended and dissolved solids within the water that can be precipitated. Additional wastes streams from the process include consumable filter media types, such as bag or cartridge filters, nonreturnable chemical containers, and disposable personal protective equipment.

Fig. 1 is a process flow diagram depicting the procedure to pretreat produced and flowback water containing from 50 mg/L to 300 mg/L of guar.

Pretreatment of Flowback Water With High Concentrations of Guar Gum

The initial flowback water from a petroleum well located in northern Colorado undergoing hydraulic fracturing was tested for guar removal. The sample was analyzed and found to contain from 5,000 mg/L to 6,000 mg/L guar. As shown in Fig. 2, the raw water sample, while cloudy, contained little in petroleum components. Jar tests were conducted using aluminum chloride, magnesium chloride, and ferric chloride to develop a pretreatment process.

The addition of ferric chloride into the reaction tank at a specific ratio was found to generate a flock, which initially was neutrally buoyant and dispersed throughout all levels of the tank. The tank was mixed by aeration and the flock formed into balls up to 3 in. in diameter within the tank. The amount of flocculent added resulted in a significant reduction in pH. The sludge generated required removal by mechanical means (a strainer).

Samples of the sludge, processed through a filter press filter cloth, fouled the cloth to a point that the cloth would not pass tap water. The volume of sludge generated in this operation was approximately 25 vol% of the influent water stream. The resulting reaction tank water was transparent with a slight orange tint (Fig. 3).

Initial chemical pretreatment of this water was highly dependent on the chemicals being added. Lowering the pH with a common acid before adding lower concentrations of ferric chloride proved unsuccessful.

After the skimming operation, the water was colored slightly orange from the ferric chloride with some residual suspended solids that settled within the water. The lower pH resulted in high concentrations of dissolved iron within the water (Fig. 4).

The pH of the water discharged by the skimming operation was adjusted with sodium hydroxide (caustic) to a specific range. The pH range was found to be very critical as reducing the pH by as little as 0.5 standard units less than the determined operating range resulted in solubilizing the majority of the precipitated flock back into solution and fouling the mechanical filtration system. The solution contained approximately 25 vol% precipitated wet solids.

The oxygen reduction potential (ORP) was modified during pH adjustment with the addition of sodium hypochlorite (in the form of bleach). The pH adjustment tank had a contact/reaction time for the water of a minimum of 20 minutes in a continuous flowing mode. Fig. 5 shows a water sample resulting from the process.

Up to this point in the testing, the processes were run in a continuously flowing arrangement. After pretreatment and microfiltration, a sample of the filtrate was sent to an independent facility for testing on a bench scale RO unit to determine if the water could be processed through the unit without prematurely or irreversibly fouling the RO membranes. The unit was able to process the sample for 24 hours without any significant change in the flow or pressure, and the membranes were cleanable to the original clean water condition, proving that the chemical pretreatment process for filtration was successful.

Fig. 7 is a process flow diagram depicting the procedure to pretreat flowback and produced water with guar gum concentrations greater than 5,000 mg/L.

The chemical process developed to pretreat guar for filtration had mixed results based on the concentration of guar in solution and the value of the flowback or produced water being treated.

At lower guar concentrations, the chemical pretreatment process works well and can be relatively cost-effective. At higher guar concentrations, more than 5,000 mg/L, such as those found in initial fracturing flowback water, the volume of chemicals required to deactivate, precipitate, and bind the guar, as well as the resulting volume of solids to dewater, can be cost-prohibitive.

The deciding factor is the value of the water or the competing costs for disposal of the flowback or produced water. In some cases, when flowback water with high concentrations of guar is treated and reused for further hydraulic fracturing, this process may be cost-effective.

Each situation should to be evaluated on a case-by-case basis. Pretreatment of flowback or produced waters after the two have comingled and the concentration of guar has been reduced to the range of 50 mg/L to 300 mg/L requires less chemicals, produces less sludge, and is easier to manage. The process can achieve longer run cycles between changing or chemically cleaning the microfiltration media.

The waters must be monitored during processing, and pretreatment chemistries may require adjustments during operations, thus requiring wastewater operators to check the pretreatment system regularly.

Equipment for this process could be arranged as mobile or stationary systems. Depending on the quality of water required for reuse, processing beyond microfiltration may not be required.

Given a location where both produced and flowback water is available, dilution may be a solution for efficient operation of the process.

Each situation is different and requires an individual evaluation to determine the cost-effectiveness of the process and ultimate treatment of the water.