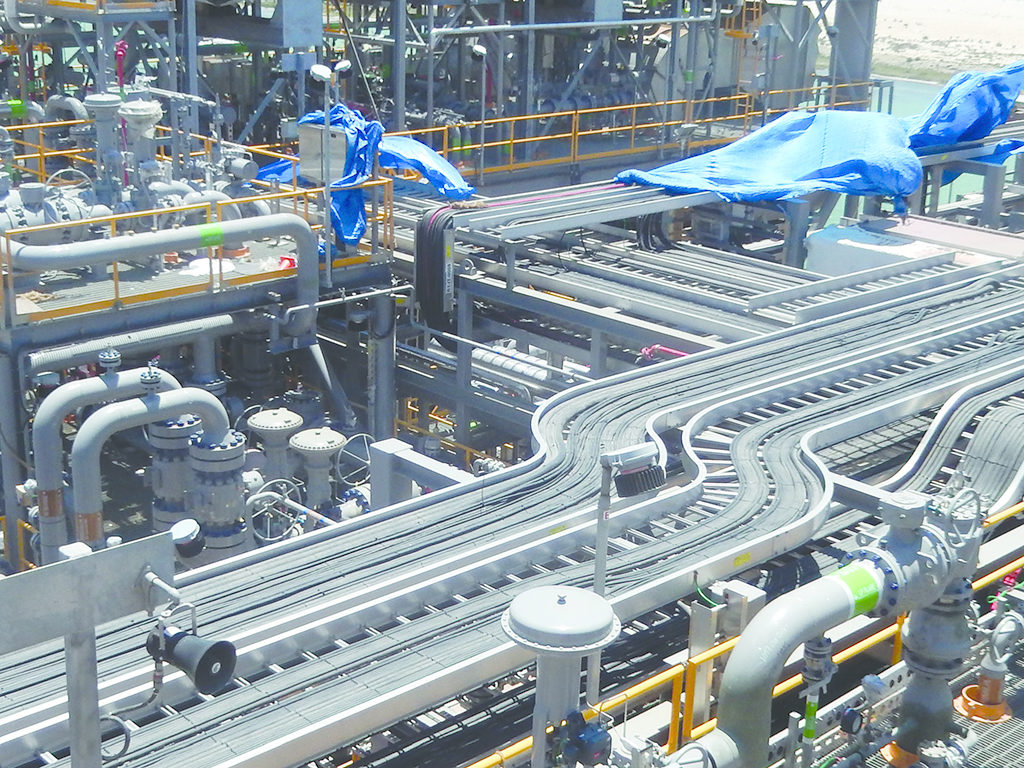 By preinstalling some equipment systems, LLOG saved hundreds of tons in topside capacity on the Delta House.

LLOG Exploration’s Delta House floating production system (FPS) looms large over Kiewit Offshore Services’ fabrication yard in Ingleside, Texas. This summer, the semisubmersible FPS underwent an incline test as one of the final stages before sailing out to its home in the US Gulf of Mexico’s (GOM) Mississippi Canyon (MC) Block 254, where it will be permanently moored in 4,500 ft of water.

Delta House will initially receive production from three subsea drill centers nearby. However, with 18 riser slots, and surplus weight capacity and topside real estate, there is no question that this structure is destined to be a major production hub in the deepwater GOM. It will have a production handling capacity of 100,000 BOPD, 240 MMcf/D, and 40,000 BWPD. Initial production will be established in the first half of next year.

Craig Mullett, offshore construction manager at LLOG, said that building in excess space and weight capacity are among the lessons the company learned from its first FPS, Who Dat, currently operating in MC Block 547. Based on a proprietary semisubmersible design (Opti-Ex) developed by Exmar Offshore, both hulls were built in South Korea. (Who Dat was built by Samsung and Delta House by Hyundai). Mullett said LLOG, an independent operating company, is a believer in the “design one, build many” school of incremental improvement. Delta House is 40% larger than Who Dat and both have only two topsides decks instead of the usual four. The Delta House topsides was mated to the hull by Kiewit in a single, record-breaking 9,640-ton lift.

Quayside at Kiewit, the 200-ft-tall structure was crawling with workers performing final preparations toward what is known as “mechanical completion,” a milestone that will lead to the sail out of the FPS (Fig. 1).

Among the tasks still to be completed is the incline testing. Mullett pointed out a large black washtub set up in an open space on the deck (Fig. 2). Hanging just above the bottom of the tub is a sinker weight attached to a strand of monofilament, forming a makeshift plumb line. He explained that after the tub is filled halfway with soapy water, he will track the movement of the sinker weight across the water’s surface, which indicates hull motion.

Two finger cranes are positioned on Delta House, one on each side of the topsides deck. Two weights totaling 25,000 lb rest next to each crane. The test itself is simple, but dramatic.

The hull will be ballasted down 11 m, which is less than its operating draft of 30 m. The shallow draft reduces the hull’s stability and amplifies any movement. The amplification makes the test data more accurate and easier to read. During the test, all personnel will stand by their stations to simulate normal working conditions. “We measure everything, even the people,” Mullett said.

Once everything is set, the cranes will come to life, and slowly pass the huge weights back and forth across the platform, while the motion of the sinker weight across the soapy water is tracked. The experiment is designed to validate the computer modeling of the hull stability and confirm the actual hull-weight capacity.

The incline test is a relatively simple exercise that points out an insurmountable variable of offshore activities: weather. Even though the FPS is securely moored in protected waters, strong winds prevent the incline test from taking place on the scheduled date. If weather can affect a 20,000-ton vessel in protected waters, it is easy to imagine how difficult it might be to perform the same test offshore.

As Mullett tours the platform, he resembles a politician working a room; everyone he passes seems to have a question or an update for him.

Mark Myhre, senior engineering consultant at GATE, is in charge of commissioning the platform. He explained that Mullett’s approach is typical of LLOG and is one of the key reasons that such a large facility will be commissioned quickly. Working for an independent operator empowers Mullett to make key decisions on site. Walking through the platform and stopping to chat and shake hands is not just his way of keeping current on the construction. It also allows him to answer questions and make decisions that keep the various teams moving forward with their assignments.

Myhre said many operators would need to take such decisions up the corporate chain of command, delaying action for days or weeks until a decision is made. Mullett has the authority to make decisions in real time to keep the process flowing.

As Mullett moves across the deck, he points out various design improvements that resulted from lessons learned during the Who Dat project. After Who Dat came on production, it was quickly running at capacity with little weight or space to spare, limiting the potential for expansion. Extra space and weight capacity can be set aside to accommodate increased future production, but it can also be a buffer against unforeseen changes in flow rates or fluid compositions.

Delta House was scaled up in the design stage to guarantee extra space and weight capacity. But then a funny thing happened. Kiewit, who built the topsides for Who Dat and Delta House, realized it would be possible to integrated several large topside modules into the deck. Traditionally, such modules would be built separately onto skids, then set in place and welded to the deck. Integrating the modules and eliminating the heavy skids decreased the weight of the modules approximately by 100 tons each.

In the case of the production vessels, Mullett said integrating the modules into the deck saved approximately 300 tons in topside capacity. Modules that had been subcontracted to other companies and shipped to Kiewit for integration were skidded. Mullett said integrating even more modules would be a lesson carried over to LLOG’s next FPS. The tonnage saved through the integration of modules is in addition to the margins designed into the platform, giving Delta House even more expansion capacity than expected.

Other innovations pointed out by operations staff on Who Dat include remote terminals located throughout the topside deck. The 10 terminals allow operations personnel to make adjustments to equipment at the source, rather than from the control room. Also, the Delta House features what Mullett calls a “stack pack” design for its low-pressure gas separators. By installing the degasing unit on top and the water/oil separator below (instead of in line), the designers opened up additional space on the deck.

Philosophically, Mullett sees Delta House as distinct from Who Dat. Referring to the pump room design, he said, “Who Dat is set up like a marine system. This is set up like an oilfield system.”OGF