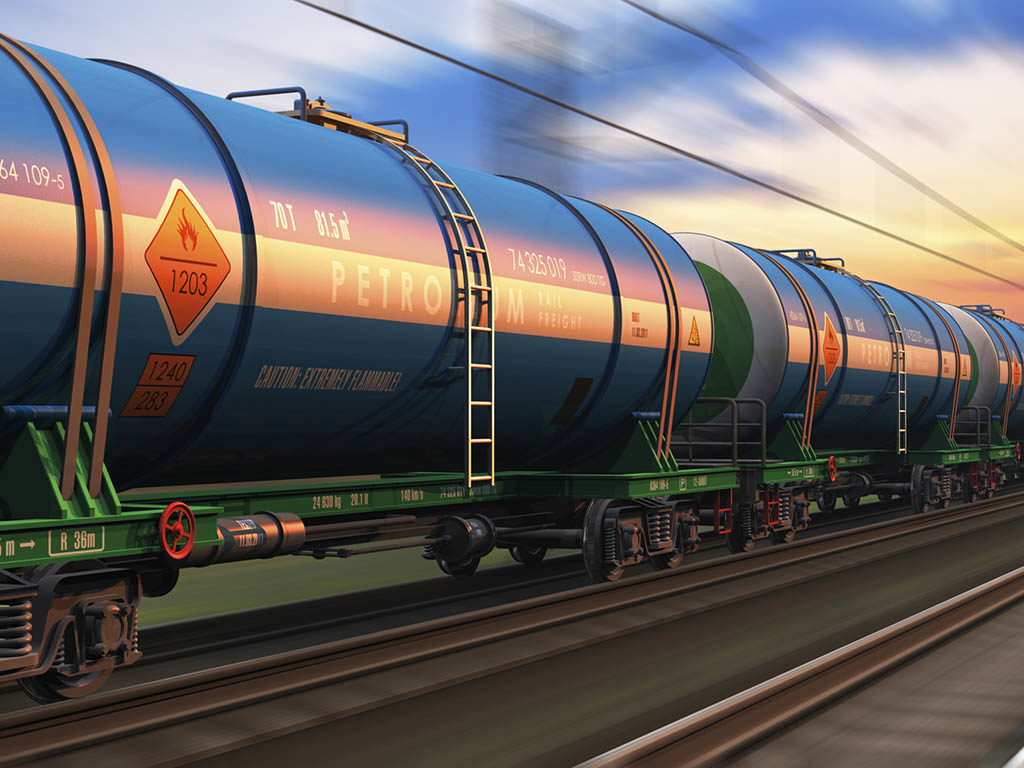 With the Bakken production rate surpassing an average of 1 million BOPD, the issue of crude transport by rail and its regulation has moved to the forefront. Sixty percent of the daily production is transported by railcars to refineries and midstream companies at terminals on the east, west, and Gulf of Mexico coasts in the United States. Insufficient pipeline export capacity pushes the transport onto rail. Of the Bakken crude production in May (an average of 1.04 million BOPD), the North Dakota Pipeline Authority estimated that 59% was moved by rail, 34% by pipeline export, and 1% by truck to Canadian pipelines, and the remaining 6% was refined at Tesoro’s refinery near Mandan, North Dakota.

In a region accustomed to the rumble of coal- and grain-laden trains, the added rail traffic from the crude oil boom turns heads. The number of railcars hauling the Bakken crude has grown dramatically from 9,500 carloads in 2008 to 400,000 carloads in 2013—an increase of 4,000%.

The US Department of Transportation (DOT) stepped up its attention to the characterization of Bakken crude oil and standards for railcars following incidents that occurred last year in Quebec, Canada; Alabama; and North Dakota. In July, an unattended 74-car train carrying Bakken crude derailed in Lac-Megantic, Quebec, resulting in the explosion of multiple tank cars. Forty-two people were confirmed dead and more than 30 buildings in the town were destroyed. In November, a tanker train hauling 2.9 million gal of Bakken crude oil derailed and burned in a west Alabama swamp, and in December, a train hauling grain near Casselton, North Dakota, slipped off the rails and blocked a neighboring track. A crude oil train going the opposite way struck the derailed cars, resulting in several oil tank cars bursting into flames.

David Friedman, vice president of regulatory affairs at the American Fuel and Petrochemical Manufacturers (AFPM), said, “These incidents have increased because crude traffic has increased. When you have a 4,000% increase in carloads, you’re going to see an increase in incidents.” He said that 99.997% of the crude deliveries were taken safely.

Speaking at a Houston luncheon hosted by the SPE Gulf Coast Section’s Health, Safety, and Environment study group, Friedman said the DOT’s Pipeline and Hazardous Materials Safety Administration (PHMSA) and the Federal Railroad Administration began planning Operation Classification, also known as “The Bakken Blitz,” in March last year.It involved joint activities at all phases of transportation to investigate how shippers and carriers were classifying crude oil and how they determined the characteristics of the material.

Launched in August last year, the operation targeted shipments from the Bakken and consisted of unannounced spot inspections, data collection, sampling, and verifications of compliance with federal safety regulations. The inspections resulted in Hess, Whiting Oil and Gas, and Marathon Oil facing fines after investigators found 11 of 17 oil samples mislabeled.

AFPM’s study of Bakken crude characteristics, which included 1,400 samples, found that the highest pressure seen in winter, when pressures tend to be higher, was approximately 15.7 psi. The designation for combustible gases is 43 psi. “The railcars can handle up to about 240 psi. We thought that the results were well within the proper range,” Friedman said.

AFPM determined that Bakken crude oil is appropriately classified as a flammable liquid based on DOT and international transportation requirements and does not pose risks significantly different from other crude oils or other flammable liquids authorized for rail transport. A North Dakota Petroleum Council study confirmed AFPM’s results. Based on 47 samples, DOT’s Bakken Blitz results concluded that the Bakken crude was more volatile than other types of crude, Friedman said.

Tank car standards are also undergoing scrutiny, Friedman said. The DOT-approved legacy cars are designated DOT-111. Crude oil shippers own or lease the railcars. The cost of a new railcar ranges from USD 130,000 to USD 140,000, while a lease costs USD 2,000/month/railcar, he said. The life span of a tanker car ranges from 40 years to 50 years with inspection and qualification required every 10 years. Currently, there is an 18-month backlog on tank car orders.

In 2011, the railroad companies petitioned DOT for upgraded cars (referred to as “petition cars”) and several industry groups petitioned to expedite the proposed standards for crude and ethanol transport. Although the petition has not yet been approved by DOT, PHMSA released an advanced notice of proposed rulemaking for the railcar changes in 2013.

Since 2011, shippers have been purchasing petition cars in good faith expectation that they will be approved by PHMSA. By 2015, there will be more than 50,000 petition cars in use, representing a total investment ranging from USD 4 billion to USD 6 billion.

The Association of American Railroad recommended specifications for railcars to include jacketing and a 9/16-in. shell. The car’s empty weight is 91,800 lb with a payload of 194,200 lb. The petition railcar—jacketed, 7/16-in. shell—weighs in empty at 83,200 lbs with a payload of 202,800 lbs. Friedman said, “You’ll actually be carrying more cars to make up for what we lose in payload.”

He said, “DOT thinks ‘innovative technology’ can result in lighter steel and the weights will be lower, but I’m skeptical. These cars need to be built now, but I have not heard from the railcar manufacturers that they have the lightweight steel. I’m not sure we’re going to see it that quickly, and I’m concerned that we may be running more trains because the weight penalties are there.”

The outlook for the Bakken production in 2016 is estimated to reach 1.6 million BOPD, spurring rail and pipeline expansion projects in North Dakota to meet the takeaway needs of the Bakken producers. Energy Transfer Partners and Enterprise Product Partners have recently announced plans for new pipeline construction to carry the crude to Patoka, Illinois, and Clearbrook, Minnesota, respectively. Until the pipes are humming, expect the rails to keep rumbling.