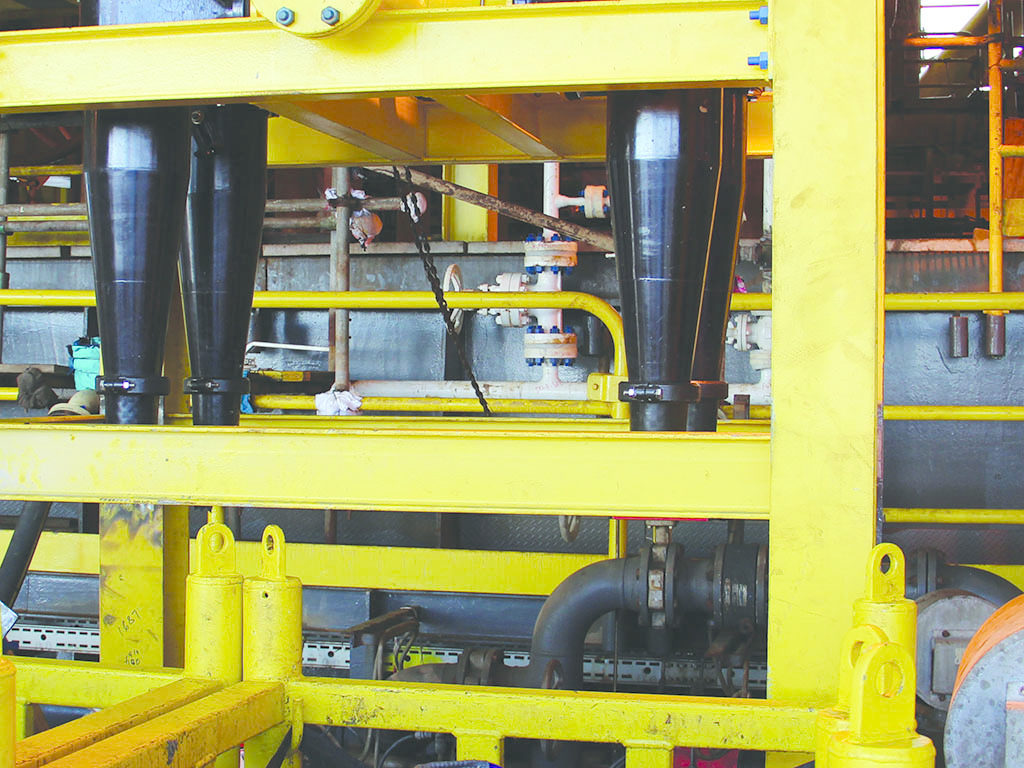 Upstream separation processes remain a hot topic for facilities engineers. Striving to design separators with the optimal sizing for a variety of reservoir conditions, increasing water cuts, and dynamic gas/oil/water production characteristics is critical, but challenging.

The separation of gas, oil, and water is generally what comes to mind when thinking of separation processes. However, a factor often underestimated in its effect, but which can wreak havoc on a well-designed system, is sand.

Sand is produced from poorly consolidated reservoirs and as oil and gas fields mature, production of sand and other reservoir solids can become an increasing and sometimes major impediment to hydrocarbon production and facility operations. The solids can move through the wellbore into process facilities and increase corrosion and erosion damage on flowlines, choke valves, production headers, fluid transfer lines, and they may fill up the separator and affect valves and equipment downstream of the separator. The volumetric capacity of surface facilities is reduced because of the accumulated sand at the bottom of pipelines and process equipment. Pressure drop is increased as a result of the decrease in the cross-section of the pipeline. Sand production results in increased maintenance and operating costs (e.g., consumption of electricity increases with the necessity for increased pumping) and decreases production. If the problem is not mediated and the sand accumulates, well shutdown may result.

Selection of a Desander in the Orinoco Belt

Márquez and Brito (2014) described a methodology for the selection of a desander technology to separate sand in heavy and extra heavy oil production. The case study is based on experience in the Orinoco Belt of Venezuela.

A cluster of wells that produced 12,188 BPD generated approximately 894 kg/D of sand, making it necessary to handle the sand in surface facilities. The sand must be retained because of the high-viscosity oil production.

Rawlins and Wang (2001) identified the five main processes required in sand-handling systems: separation, collection, cleaning, dewatering, and haulage (Fig. 1). Márquez and Brito point out that the capital expenditure (Capex) and operating costs (Opex) of collection, cleaning, dewatering, and haulage will not generally vary, regardless of which separation technology is selected. Therefore, the proper selection of the separation technology is the key to Capex and Opex considerations.

Márquez and Brito present three variables to guide the selection of a suitable desander for heavy and extra heavy oil: particle size, sand concentration, and liquid properties (viscosity and density).

To facilitate the transportation of the Orinoco Belt extra heavy oil, it is diluted to reduce the viscosity and increase the density. In this case, a light or medium liquid hydrocarbon was injected at the wellhead to obtain a viscosity of 750 cP and 16 °API.

The properties of the sand were described.

Márquez and Brito noted other considerations in this case were that the sand needed to be removed close to the well to reduce its effects on downstream processes; multiphase flow station operation was planned; and to remove at least 90% of the sand, it was necessary to separate the particles with diameters down to 29 mm.

Based on the particle size (ranging from 8 mm to 679 mm), sand concentration (0.0018%), and the characteristics shown in Fig. 3, Márquez and Brito said that desanding with a screen filter was a proper application in this case.

In the discussion of liquid properties, the authors address the influence of density and viscosity. Because residence time is increased as liquid density increases, the use of gravitational settling in this case would require at least 180 hours of residence time.

An experimental study of the performance of a prototype cyclonic device showed that for a liquid viscosity of 200 cP, the speed of the cyclone swirl decreased rapidly, reducing the efficiency of separation and resulting in performance equivalent to a conventional separator. The authors conclude that centrifugal devices are limited in their application as desanders in heavy and extra heavy oil production.

Liquid viscosity and density do not affect the performance of screen filters to the same extent as in gravitational settling and centrifugal sedimentation. Based on filtration and retention of particles, screen filters do not require density differences between multiple phases of flow to achieve separation. Solid particles are retained according to their size, which ensures that only the particles with a given size are allowed to pass through the filter.

Narrowing Down the Options

Table 2 compares desanders using criteria in a selection matrix that is called the “criteria and solutions weighting method,” which was proposed by Vilchez (2008). The criteria are prioritized according to their level of importance and evaluated hierarchically. The criterion considered most important was assigned 11 qualification points and the least important received 1 point.

The authors concluded that screen filters were the best solution to desanding in heavy and extra heavy oil fields. The second option was settling tanks/vessels, while centrifugal devices were the last choice. 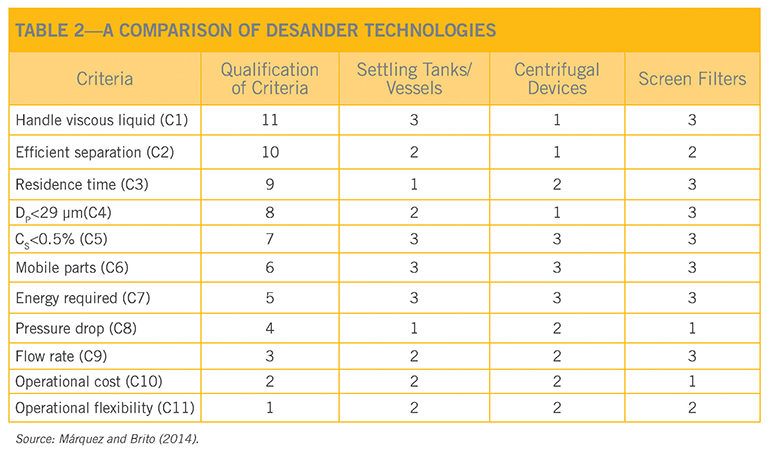 SPE 72999 Design and Installation of a Sand-Separation and -Handling System for a Gulf of Mexico Oil Production by C.H. Rawlins and I.I. Wang, Kvaerner Process Systems.

To address the issues in the design, upgrading, and operation of separation technologies, a special session on separation will be held at the 2014 SPE Annual Technical Conference and Exhibition (ATCE), 27Ð27 October, to explore options for optimizing separation facilities to handle the increases in water production and the drops in wellhead pressure with methods that are suitable to the changes in production profiles. Improvement in the performance of separation facilities may require vessel-based retrofits with alternative internals, compact cyclonic separation equipment with minimum footprint requirements, control and operational modifications, and tailored chemical management programs.

The special session will be held Monday, 27 October from 2 p.m. to 5 p.m. The session moderators are Victor van Asperen of FMC Technologies Separation Systems, John Buckingham of the Southwest Research Institute, and Brad Nelson of Maxoil Solutions. The panelists are Ed Grave of ExxonMobil Upstream Research, Carlos Quintero of Total, Ian Charles Bedwell of Maxoil Solutions, and Remko Westra of FMC Technologies. Visit www.spe.org/atce/2014/ to learn more about the special session and other projects, facilities, and construction content.

Modeling Tool Available for the Optimal Sizing of Gas/Liquid Separators

Using the methods outlined in the articles, the Separation Sizing Tool was developed and is now available to determine the optimal (lowest weight) size of a gas/liquid separator needed to achieve user-specified separation and operational performance requirements.

The calculations are based on quantification of entrained liquid loads, liquid droplet/gas bubble size distributions, fluid velocity profiles, and the relevant performance characteristics of user-selected separator components, including internals.

The methodology is believed to be a significant improvement over the traditional methods used for separator sizing by the industry.

The Separation Sizing Tool is available at www.petroskills.com/tool.