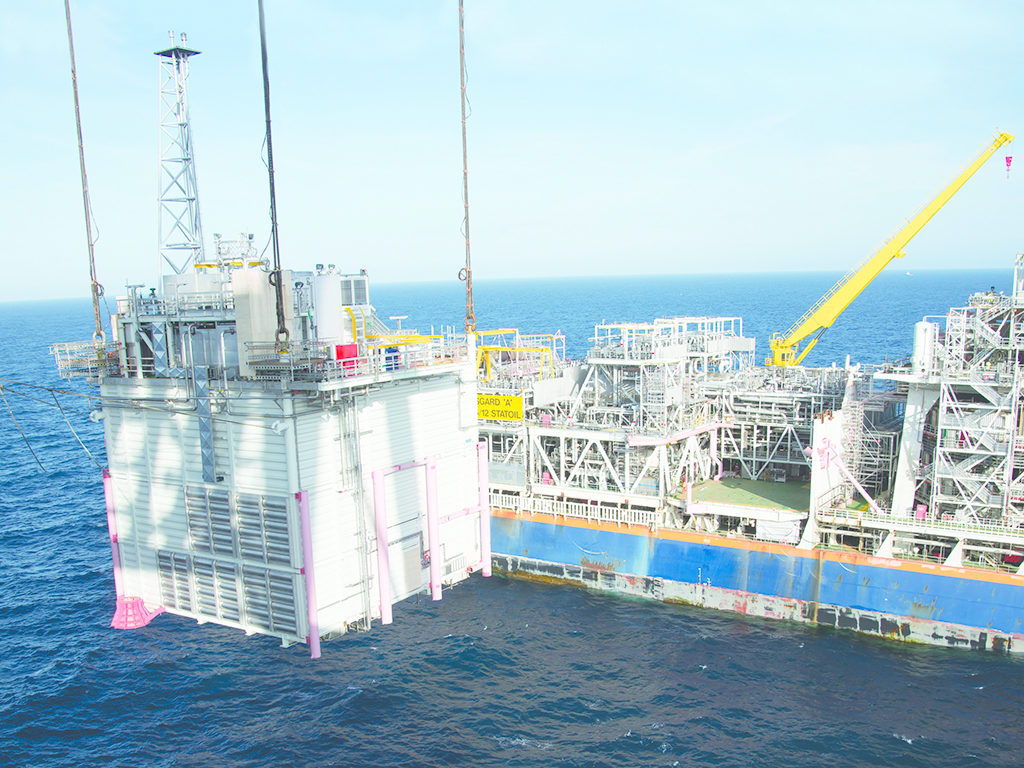 As offshore development moves into deeper waters, harsh environments, and longer distances, the economic and practical advantages of moving as many components to the seafloor as possible has become a driving factor in technology development.

The ultimate goal is generally accepted as the “subsea factory” concept, an idea championed by Statoil and accepted by most industry players in the subsea sector as the vision of the future—in some version or another.

Statoil’s vision of the “Statoil Subsea Factory”—a term so proprietary that it has trademarked the name—calls for the equivalent of a full topsides processing facility to be operated on the seabed, enabling remote subsea-to-beach hydrocarbon production, processing, and transportation in remote, deepwater, and Arctic locations (Fig. 1). Statoil refers to this strategy as taking subsea “longer, deeper, and colder.” 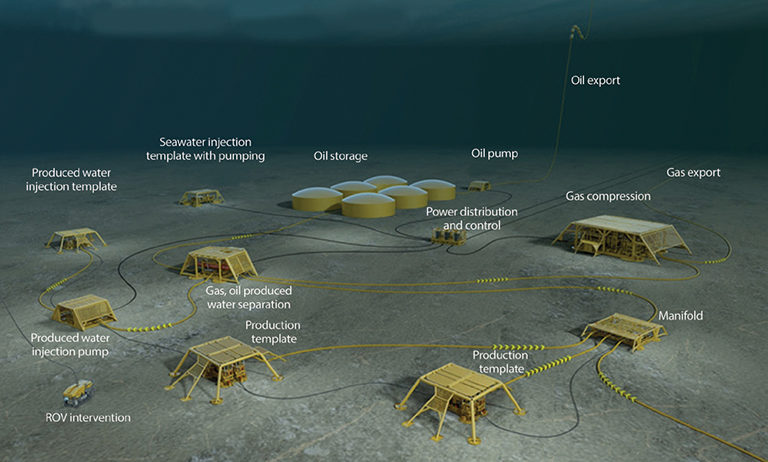 The company’s strategy is for achieving subsea compression by 2015 and a complete subsea factory by 2020, with total oil production of 2.5 million BOEPD. In the meantime, it plans to phase in as much of the technology as feasible in current and future field developments. The subsea compression component, for example, is to be delivered with the startup of the Åsgard and Gullfaks subsea compression projects, both of which have been sanctioned and are in the execution phase.

As this vision shapes subsea power technology, suppliers have joined the quest, as an alliance with Statoil, with another operator, or on their own.

Statoil is leading the JIP on behalf of other participating oil companies, while ABB is responsible for developing the new technology. The JIP follows an extensive subsea power study executed by Statoil and ABB during 2012. The total value of the agreement is USD 100 million, which will be jointly funded by the participating companies.

The 5-year program is pivotal to the development of technologies required to power and control large-scale subsea pumping and gas compression projects planned for the Norwegian Continental Shelf, the US Gulf of Mexico, and other places around the world.

The subsea electrical power distribution technology will enable several electric loads, such as pumps and compressors, to be supplied through a single power cable, according to ABB. This capability will reduce investment costs compared with using one cable for each individual load. The new technology, for example, will save more than USD 500 million, if eight loads are linked through a single cable over a distance of 200 km from other infrastructure, the company said.

To ensure compact and reliable solutions, the equipment will be enclosed in liquid-filled, pressure-compensated tanks, with components tested extensively under the full pressure that they will experience at the target water depth. The program entails material and component qualification, detailed design, and full-scale testing of a 36 kV distribution unit and two variable speed drives for pump and gas compressor applications, respectively.

Driving its research is the realization that an increasing number of offshore operations are occurring in ultradeepwater (3000 m deep and hundreds of miles from shore), where subsea processing is usually preferred for technical and/or economic reasons.

As Rixin Lai, a GE laboratory researcher, explained, to achieve subsea processing, turbo machines, such as pumps, compressors, and other processing equipment, need to be deployed on the seabed. Accordingly, various electrical equipment, including variable speed drives, power supplies, motors, connectors, and switch gears, are required to drive the machinery loads subsea. The overall power requirement ranges from tens of kW to tens of MW.

As the scale and power consumption of the subsea process continues to grow, there is a clear need for a reliable power transmission and distribution system to power the subsea equipment over long stepouts. From the power architecture standpoint, HVDC technology is a natural choice, since it has lower cable loss than an alternating current AC system over long distances.

The challenges to HVDC are that the ultradeepwater and long step-out situation is extremely harsh for the electrical equipment. The equipment needs to handle very high pressure and a corrosive environment while providing all the electrical functions as onshore, if not more.

In addition, the accessibility of any equipment deployed in the subsea field is extremely limited, Lai said. Other than being designed for installation in ultradeepwater, the electrical system must also be designed for reliability and minimum maintenance in its lifetime. The electrical system should also be compact, so that it can be installed and retrieved without heavy vessels and lifts, which have very limited availability.

To address the challenges of subsea applications, the GE researchers have developed what they believe is a novel power transmission and distribution concept: a modular stacked direct current (MSDC) system. The MSDC technology (Fig. 2) achieves the required direct current (DC) transmission voltage by stacking a number of power converter building blocks in series, both on the shore and on the subsea field, Lai said. 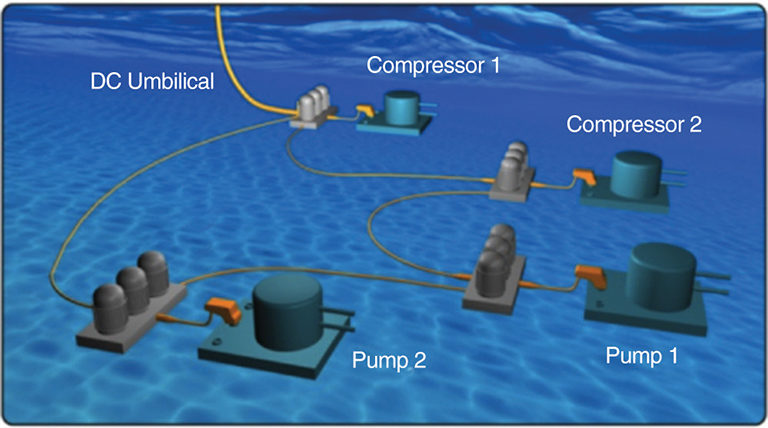 On the shore, the converter system is controlled to maintain the current in the DC cable constant regardless of the loading condition. On the other end, each subsea converter module (Fig. 3) is directly coupled to each individual motor load. Since the current in the DC cable is continuously regulated by the onshore station, the operations of the different subsea modules are decoupled.

Compared with the modern land-based HVDC system, the centralized converter station is no longer needed and fewer subsea electrical components are required for the MSDC structure, Lai said.

Since each building block in the MSDC is similar to a conventional drive, the subsea variable frequency drives are smaller and easier to transport, marinize, and retrieve, he said. Moreover, the modularity of the MSDC architecture renders the system fault-tolerance and the capability of operating in a degraded mode. The architecture is also highly reconfigurable as the field matures and the loads evolve over time, he said. Therefore, the technology potentially offers a much lower cost and higher reliability subsea power solution compared with the modern land-based HVDC technology.

In addition to the system architecture, the GE team also developed the cooling and packaging concept for the electrical equipment to be deployed 10,000 ft below sea level. The team said that a multiphase cooling approach combines reliability, electrical isolation, and thermal performance by using a pool boiling solution in a sealed pressure vessel.

The GE center secured funding support from the Research Partnership to Secure Energy for America (RPSEA). The team has demonstrated the system function in the lab and verified the design concepts for the passive cooling system and the DC wet-mate connector. The next step is a field prototype.

In another approach to subsea electrical power supply, Statoil and its partners in the Johan Sverdrup field on the Norwegian shelf have decided on providing power from shore. Phase 1 will be supplied with power from shore with a transformer on Kårstø delivering direct current to the riser platform, ensuring an estimated 80 MW.

As part of the plan for development and operations, scheduled to be delivered in early 2015, alternative power solutions for the future phases will be described. One of the alternatives will be power from shore to the whole Utsira High area based on updated power requirements. “This alternative, if selected, has the potential to capture more than 90% of the total CO2 emissions from this area,” Øivind Reinertsen, senior vice president in charge of the Johan Sverdrup field at Statoil, said.

As part of the industry’s push for subsea power solutions, the American Bureau of Shipping (ABS) in 2012 began a series of multiyear projects related to subsea production of petroleum reserves, focusing initially on subsea power and control, and subsea electrical machinery.

ABS' efforts are aligned with industry partners, including

ABS has categorized the key challenges as follows:

Each of the major categories breaks down into a number of subsets. The initial focus for each subset is shown below:

Its boosting technology was designed to support satellite developments with tiebacks to existing facilities.

A goal was to develop boosting systems for 50-km tiebacks. To achieve this goal with the robustness required for subsea applications, the company began developing pumps and compressors for both longer and shorter tiebacks. The development continues today with the following:

The company sees variable speed drives as a key mechanism for achieving these goals. These types of drives are also required for startup of equipment with long motor cables and to manage a large variety of process startup conditions.

OneSubsea recently was awarded a pump systems contract for the Total Moho Phase 1bis development offshore Congo in water depths from 1,969 ft to 2,625 ft. The scope of supply includes a multiphase pump station with two off 3.5-MW high-boost pumps, a power and control module, a power and control umbilical, and PhaseWatcher subsea multiphase flowmeters with Vx technology for pump control. According to the company, Vx multiphase well testing technology for advanced multiphase flow rate measurements measures oil, gas, and water flow rates without prior separation.

Manufacturing and testing will take place at OneSubsea’s Horsøy facility in Norway.

“This is our fourth contract to provide booster pump systems for Total E&P,” said Atle Ingebrigtsen, president of the processing systems division at OneSubsea. “Our experience in delivering more than 25 of these systems will enable us to support Total in increasing the production and extending the life of the Moho-Bilondo field.”