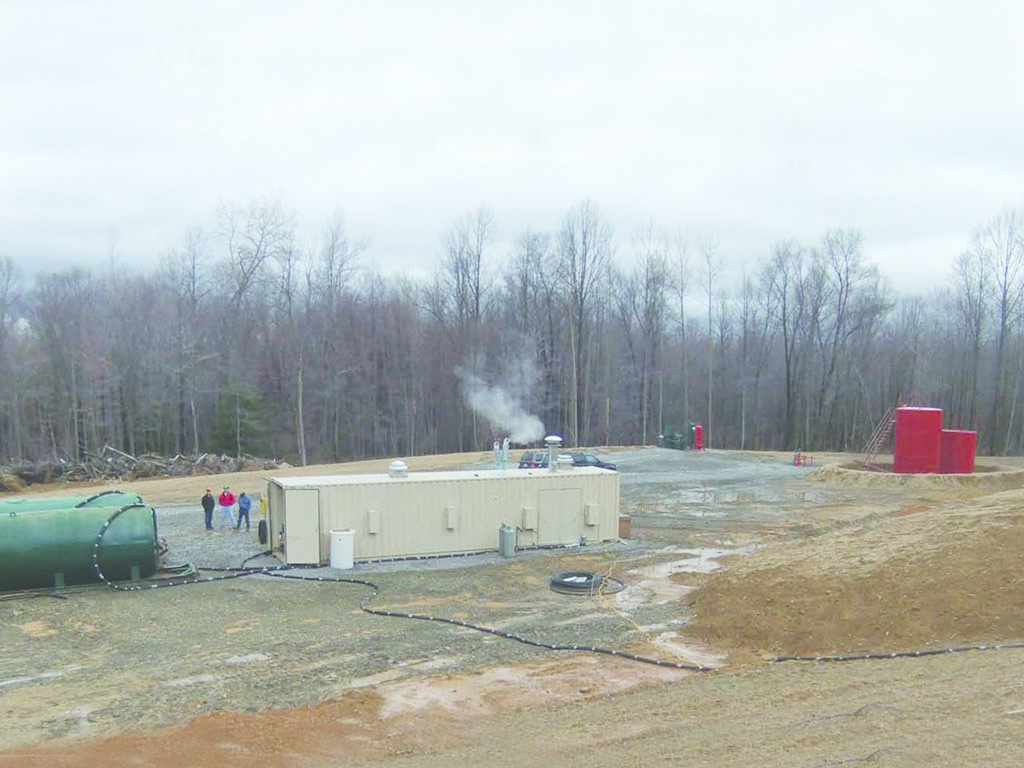 The demonstration site for the Altela thermal distillation process was located at BLX's Sleepy wellsite in the Marcellus shale. Photo courtesy of Altela.

The demands for the fresh water used in many hydraulic fracturing operations are placing pressure on water sources in some regions of the United States. Because of the high volumes of water needed for fracturing (e.g., in the Marcellus, a typical hydraulic fracturing operation for a horizontal gas well in a tight shale formation requires from 3 to 5 million gallons of water over a 2- to 5-day period), the competing demand driven by industrial, municipal, and agricultural users has in some cases decreased the availability of fresh water and increased associated costs.

Along with higher acquisition costs for fresh water, water disposal costs have also increased. Well stimulation flowback water and produced water are generally considered as waste byproducts of oil and gas production and increasingly present logistical difficulties for operators. Among the challenges are the transportation of the water over long distances and compliance with local jurisdictions and environmental regulations related to the disposal of water from oil fields.

Walter Dale, the strategic business manager for water solutions at Halliburton, said that the availability of fresh water, transportation costs, water treatment, and disposal costs may come to mind first as the major factors in water economics. However, the total cost of water needs to be considered, including acquisition, transfer to the well, transfer from the well to disposal, and disposal (Table 1). 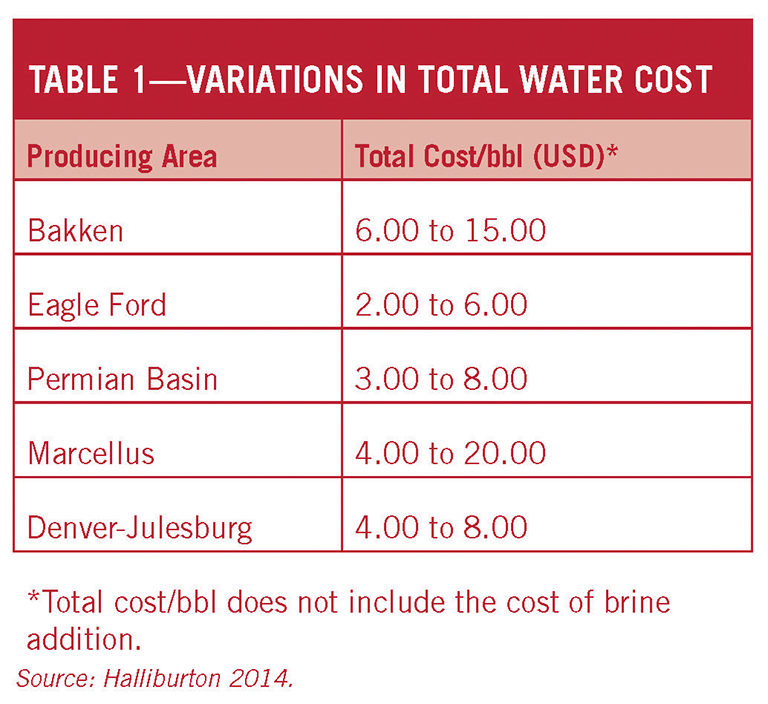 Once the fracturing procedure itself is completed, water returns to the surface as produced water, the naturally occurring water found in shale formations that flows to the surface throughout the entire production lifespan of the well, and flowback, the fraction of hydraulic fracturing fluid recovered.

The fraction of hydraulic fracturing fluid recovered varies from play to play (Table 2). For example, flowback fluid recovered from wells is reported to range from 9% to 35% of the fracture fluid used in the horizontal Marcellus wells in the northern tier of Pennsylvania (Wood et al.) Yoxtheimer (2010) reported an average recovery of flowback of 10% (over 30 days) per Marcellus well. Ultimately, from 300,000 gal/well to 800,000 gal/well of wastewater are produced. Industry data reported to the Pennsylvania Department of Environmental Protection show that about 235 million gallons of wastewater were produced in the second half of 2010 (Penn State).

A primary concern in oilfield water treatment is the level of total dissolved solids (TDS) in flowback and produced water, which varies by basin and well (Table 3). TDS is a measure of dissolved matter in water, such as salts, organic matter, and minerals. Inorganic constituents (sodium, calcium, and chloride picked up from the rock formation) contribute most of the total concentration of TDS. 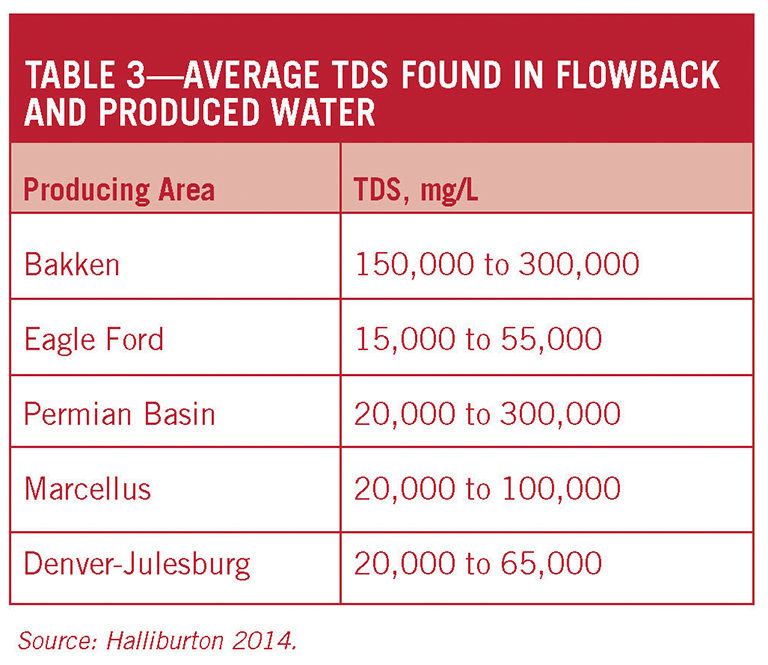 Under the federal Safe Drinking Water Act, the US Environmental Protection Agency classifies TDS as a secondary maximum contaminant level (sMCL), meaning that there is a recommended maximum level of 500 mg/L, but no requirement that public water systems meet this level. However, states may enforce their own secondary standards. TDS is not expected to harm human health at the sMCL, but elevated TDS levels may damage water treatment equipment or reduce the effectiveness of treatment for other contaminants. TDS becomes toxic to aquatic life at certain levels by increasing the salinity in freshwater systems and changing the composition of the water.

Dale said operators are reevaluating their approaches to treating water for TDS removal when aggregating their flowback and produced water to be recycled for use in hydraulic fracturing completions. General approaches to handling the TDS variability include the following:

Many treatments do not remove dissolved salts from the water, thus requiring the development of brine-tolerant fracturing fluid systems and friction reducers or the use of distillation to maintain high performance.

The cost of purifying flowback and produced water to near potable quality might not be financially feasible, while bypassing treatment entirely can pose difficulties in using the water effectively for fracturing fluids, Dale said.

The compositions of fracturing fluids vary from one product to another, and the design of the fluid varies, depending on the characteristics of the target formation and operational objectives. The predominant fluids currently being used for fracture treatments in the gas shale plays are water‐based fracturing fluids mixed with friction‐reducing additives (slickwater), linear gel, and crosslinked gel.

The fracturing fluid used in slickwater operations typically comprises about 98% water and sand (as a proppant), with additives (e.g., friction reducer, biocide, surfactant, scale inhibitor, breaker, and clay stabilizer) comprising 2% (Ketter et al. 2006). Polyacrylamide polymers are used to reduce the tubular friction pressure (friction reducers). Overall, the concentration of additives in most slickwater fracturing fluids is 0.5% to 2% with water making up from 98% to 99.5% of the volume. Because of its low viscosity (from 2 cP to 3 cP), a high pump rate is required to transport proppant in the formation.

Linear gel is water containing a gelling agent, like guar or xanthan. Other possible additives are biocides, buffers, surfactant, breaker, and clay control. Its viscosity, ranging from 10 cP to 30 cP, results in improved proppant transport compared to slickwater.

Crosslinked gel is water containing any of the gelling agents used in linear gel and a crosslinker like boron, zirconium, titanium, or aluminum. Other possible additives are buffers, biocide, surfactant, breaker, and clay control. This fluid has a high viscosity, ranging from 100 cP to 1,000 cP, which generally results in better proppant transport compared to slickwater and linear gel fracture fluids.

Development of crosslinked gel-based water systems, such as Halliburton’s UniStim service, which tolerates salt concentrations in excess of 300,000 mg/L, has enabled operators to use 100% flowback, produced water, and alternate sources, Dale said.

To reuse high-TDS water effectively in crosslinked gel-based hydraulic fracturing fluids, the water must first be treated. The goal of the treatment is to remove only minerals that hinder the development of the crosslinked fluid or that cause scale buildup in wells, he said. In these cases, treatment is done to the extent required to ensure production and fluid integrity, creating less waste for disposal.

An example of the cost benefits associated with freshwater conservation were based on a Montney well located in northeastern British Columbia, where production water was used after commingling with freshwater sources. The total amount of water required for the well (20 zones) was about 340,000 bbl. Using flowback water and assuming two cases of 30% and 50% fluid recoveries, from 113,000 bbl to 170,000 bbl of fresh water could be saved per well. By using a brine-tolerant friction reducer and with reuse of all flowback water, the estimated savings were about USD 1.4 million for the treatment of one well. The estimate assumed that no water was sent for disposal (Tables 4 and 5). 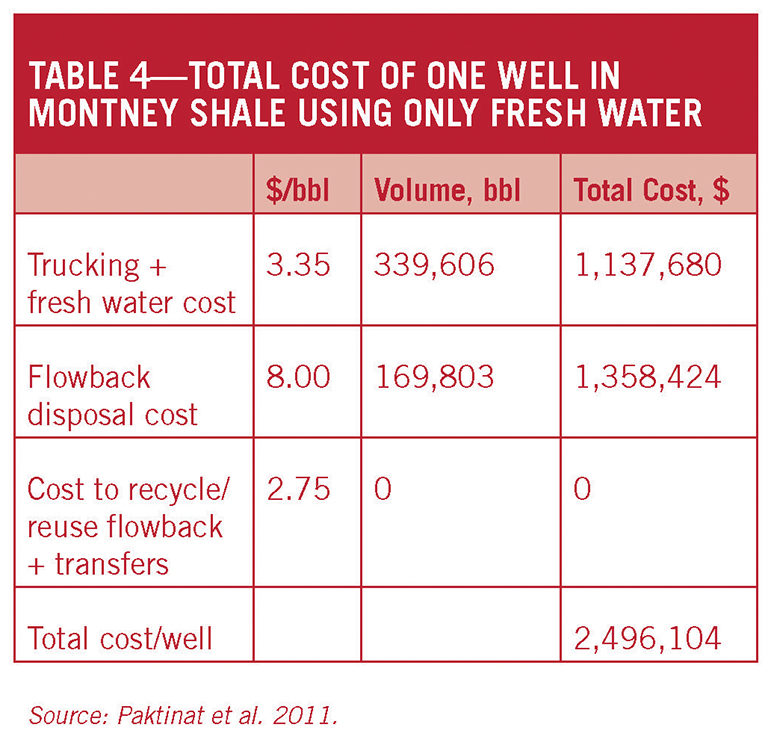 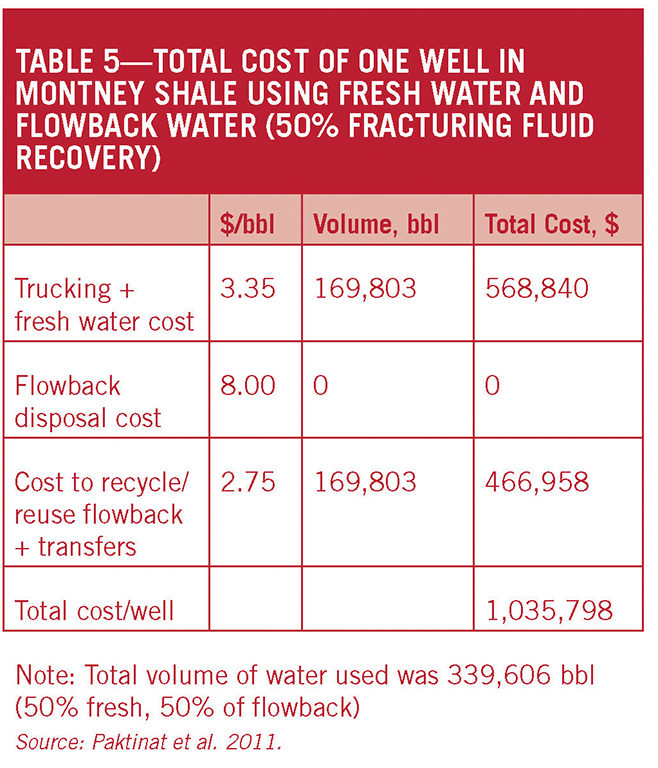 One Size Does Not Fit All

Dale said that the decision to recycle flowback and produced water is dependent upon the economic factors for each operator. The number of wells, amounts of flowback and produced water, and the proximity of these sources for aggregation are important factors in determining water management. “The ability to recycle high volumes of water is the goal. It’s a function of how much available impaired water you have in proximity.

In locations where the flowback and produced water volumes are not high, aggregation will eliminate disposal and acquisition of one barrel of fresh water for every barrel that is reused. He said, “You’re also going to reduce your brine purchase and reduce double-trucking costs.”

In the Permian Basin, older conventional wells are producing high volumes of water and are tied by gathering lines to a central disposal facility. Dale described a customer’s effort to develop a hub and spoke model to accommodate an entire field, which was too large for the model to be economically feasible. “The reality was that the customer had the most volume of water production, not in the center of the spoke, but in the top right-hand quadrant of the spoke. In this case, it makes sense to recycle in that quadrant, but doesn’t make sense to recycle in the bottom left-hand quadrant.”

Dale said that operators should look for alternate sources of water in proximity to their unconventional completions that require high volumes of water. “Look for the high volumes of impaired waters, such as flowback, produced water, and brackish water wells.”

He said an operator with a project located near a refinery is considering aggregating its flowback, produced water, and brackish water with water available from the refinery. In this case, the refinery’s water quality is suitable for making fracturing fluids.

Increasingly, asset managers are becoming the decision makers in an organization’s water recycling approaches. Dale said, “Some organizations are realizing this. The senior executives want to recycle, but the completions engineers don’t have the budget for it. These decisions are beginning to involve the P&L (profit and loss) people in the company.”

Conventional treatment includes flocculation, coagulation, sedimentation, filtration, and lime softening water treatment processes. These methods are generally effective in removing nondissolved constituents, such as total suspended solids, oil and grease, and hardness compounds. Although conventional processes can be energy-intensive, they are typically less energy-intensive than the salt separation treatments, which will be discussed below. Simple filtration methods with minimal chemical inputs have lower energy, environmental, and economic effects.

Advanced treatment technologies, such as reverse osmosis membranes, thermal distillation, evaporation and/or crystallization processes, are used to treat TDS. The thermal and membrane processes require more energy than the conventional methods. Additionally, in most cases, conventional processes are used upfront to remove the nondissolved constituents prior to the TDS treatment processes.

A recently introduced technology for water deslination/decontamination in the Marcellus shale play implements an internal heat transfer process that allows the reuse of the latent heat of condensation to offset the total latent heat of evaporation required in conventional thermal distillation. Incoming dirty water is converted into clean distilled water and a concentrated solution of dirty water (Fig. 1).

By recapturing the energy used to evaporate water, the AltelaRain process yields about four times the amount of distilled water per energy input as tradition distillation/evaporation techniques without using pressure (Bruff and Jikich 2011).

The process begins with the produced water that is collected in an on-site holding tank. Following its transfer by pump to a containerized system, the produced water is circulated continuously through 10 towers. The towers are designed to evaporate pure water from the brackish produced water. The evaporated water is then condensed within the same tower, on the opposite side of thin plastic sheets.

Each facility is able to process up to 12,000 B/D (about 500,000 gal/D) of wastewater, which can then be reused for well operations or discharged into surface waterways.

Bruff and Jikich (2011) reported the total treatment cost as USD 5.29/bbl at the completion of a National Energy Technology Laboratory (NETL) demonstration project in 2011, prior to the technology’s implementation at the wastewater treatment facilities. The cost included the trucking and disposal of the concentrated dirty water. This total cost represented a savings of 16% compared to trucking and disposal costs without treatment by the system. The authors noted that real-world savings would be larger, because of the high labor costs involved with the NETL demonstration project.