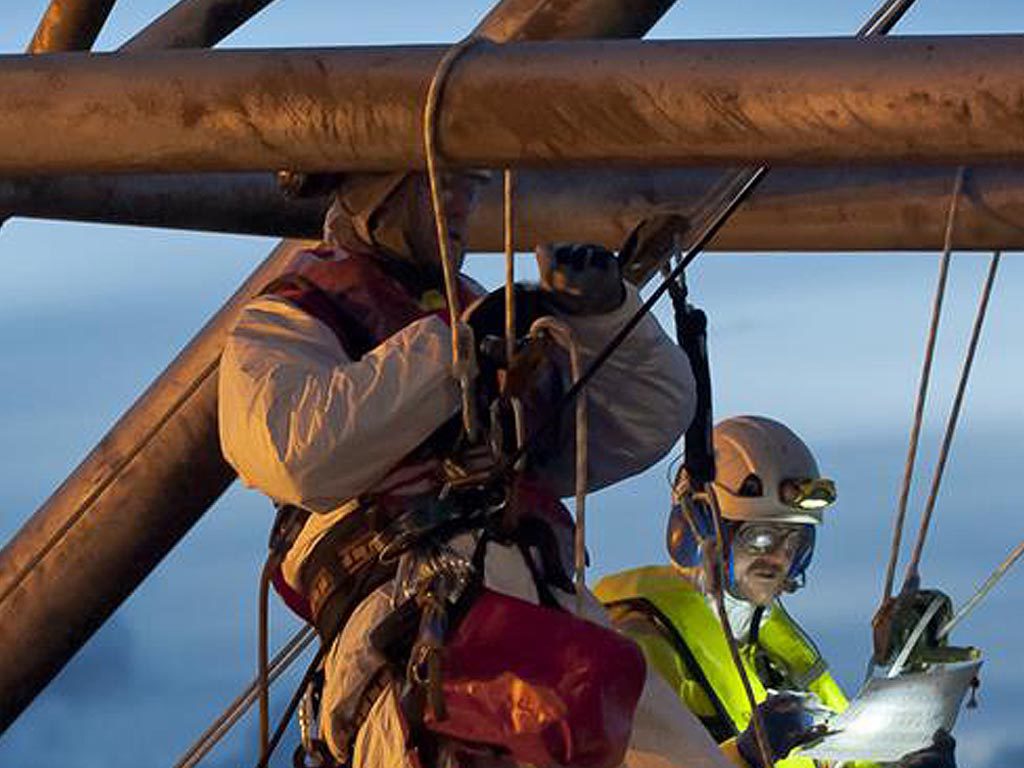 Since the recent oil price downturn, the offshore maintenance, modifications and operations (MMO) market has witnessed a significant decline of 22% in global expenditure from USD 105.9 billiion in 2014 to USD 82 billion in 2015. A further 5% drop in MMO spend is expected in 2016 from 2015 levels, equivalent to an expected total market of just over USD 78 billion by the end of this year. The most severe decline in total regional expenditure (35%) between 2014 and 2016 is anticipated to occur in North America, with modifications expenditure forecast to drop by 56% during this period. 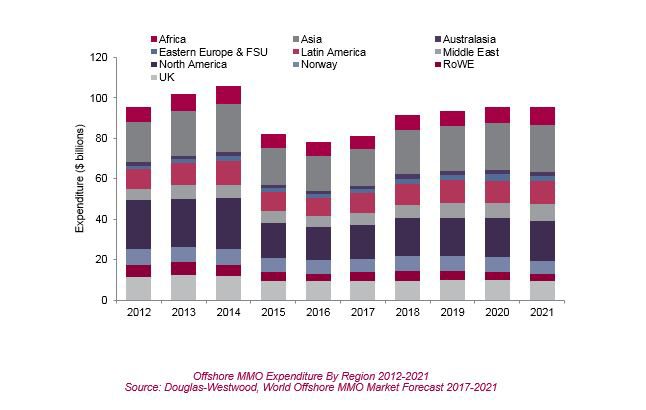 Comments by specialist MMO providers place emphasis on substantial pricing pressures across all MMO service lines, which triggers concerns over future global MMO expenditure. Nevertheless, offshore platform population, combined with attrition of existing infrastructure and industry regulation, are expected to drive a steady return to growth for the offshore MMO sector between 2017 and 2021.

The World Offshore Maintenance, Modifications and Operations Market Forecast 2017–2021 presents a “bottom-up” (fixed and floating platform-by-platform) analysis of the market. Model assumptions and outputs are sense-checked via extensive industry interviews to allow a higher level of accuracy and give a granular and realistic evaluation of the current and forecast activity in the sector. The report splits fixed platform population by size, from extra-large to extra-small, while floating platforms are segmented by type, including FPSO, FPSS, FSO, FLNG, spar, storage barge, and TPL.

The global MMO expenditure is expected to increase from USD 81 billion in 2017 to USD 95 billion in 2021, growing at a compound annual growth rate of 4.1% for the world’s global offshore platform population of approximately 8,700 fixed and floating assets. Over the forecast period, a total of approximately 400 fixed platforms and approximately 80 floating platforms are forecast to be installed. Global market expenditure will be driven by age and degradation of existing asset infrastructure and the need for adherence to industry standards. The average age of global fixed and floating platforms is about 30 and 17 years, respectively. In some regions, as in the North Sea, many offshore assets are operating beyond their expected life span, due to modifications works such as platform upgrades and subsea field tie-ins, which can prolong the initial design life of offshore assets. 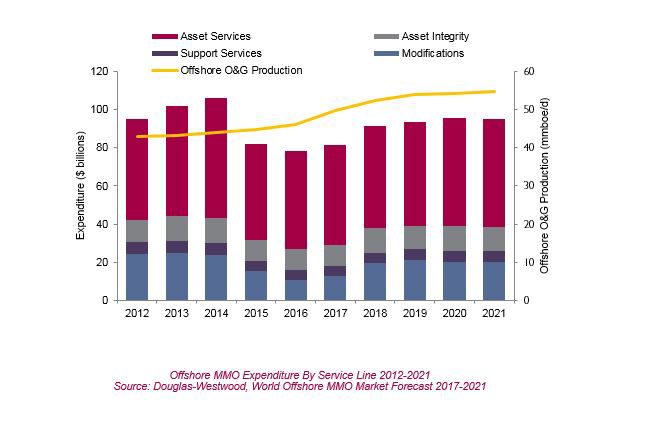 Split into consultancy, asset management, integrity services, and relocation and decommissioning services, asset integrity refers to the process of maintaining offshore infrastructure to ensure compliance with health and safety requirements and reliable production environment. Over the forecast period, asset integrity is expected to total USD 61.9 billion, accounting for 14% of global MMO expenditure.

Support services involves a wide range of facility management tasks performed to ensure efficient human resource allocation, support, and organization of administrative services on offshore assets. As these are viewed as nonessential services in the current oil price environment, support services expenditure is expected to be the smallest contributor at USD 27 billion, accounting for only 6% of overall MMO spend between 2017 and 2021.

Forecast at USD 94 billion (21%) of total MMO expenditure, Modifications spend is anticipated to improve significantly over the forecast, driven by a combination of a number of platforms globally due for upgrades and operators turning their attention to previously deferred modifications work. This service line involves subsea tie-ins, platform rig, gas treatment, low production pressure (LPP), and communications and accommodations services. Gas treatment is anticipated to be the largest contributor (43%) to overall modifications expenditure, followed by LPP (26%) in the 2017–2021 period. This is due to the complexity of gas production facilities and the amount of LPP modifications jobs anticipated over the forecast.

Asset services will remain the largest service line, at USD 273 billion, representing 60% of total MMO expenditure between 2017 and 2021. This service line comprise mechanical services, fabric maintenance, speciality, and equipment services. Expenditure in this service line is correlated positively with the installed offshore platform infrastructure. A steady growth will be driven by fabric maintenance, which is expected to account for 46% of total asset services expenditure over the 2017–2021 period.

While over the 2012–2016 period, Asia accounted for 22% of total MMO expenditure, the region’s share is anticipated to increase to 24% between 2017 and 2021, driven by an increase in demand for fabric maintenance services for the region’s largest and second-largest population of floating and fixed platforms respectively, together adding up to approximately 2,500 assets.

Between 2012 and 2016, North America represented 23% of global expenditure. Over the forecast period, however, the region is expected to reduce its contribution to total spend to 20%, primarily driven by a decline in demand for asset integrity services, forecast to fall by 20% compared to the 2012–2016 period. This is due to a significant decrease in expected relocation and decommissioning expenditure as expensive service costs result in project deferrals in the current commodity price climate.

The rest of the regions are expected to see their respective shares of the total market remain generally unchanged over the forecast when compared to the 2012–2016 period. Latin America will remain the third-largest market in terms of MMO expenditure, while the region’s share is projected to increase slightly from 11% in 2012–2016 to 12% in 2017–2021, due to a recovery in modifications demand. Similarly, Australasia will continue to account for the smallest (2%) share of global spend, given the regions lowest number of fixed platforms. Nonetheless, Australasia is expected to experience a significant increase in modifications demand over the forecast, due to a move to deeper waters and an increase in major developments anticipated over the forecast.

The offshore MMO market is led by brownfield or operational expenditure (Opex), which is more resilient to commodity price fluctuations compared to capital expenditure- (Capex) led markets. Despite this Opex nature, however, offshore MMO providers are struggling to keep service rates from falling. Industry feedback suggests that MMO providers are currently adopting a number of measures to diversify their existing portfolios and penetrate new markets, such as renewables and decommissioning, and include more services within a given MMO work scope to ensure a more appealing value proposition.

While the demand for offshore rig maintenance services remains suppressed, specialist rig maintenance contractors are focussing on obtaining relevant certifications and qualifications to be able to service offshore platforms, which are expected to attract a greater volume of maintenance expenditure over the forecast than rigs. Integrated asset services providers are investigating more closely the needs of their existing clients to ensure provision of relevant service lines and maximized customer satisfaction. A number of MMO specialists agree that new industry practises are being adopted currently to eliminate the identified inefficiency and over-engineering throughout the supply chain, and ensure efficiency and greater productivity in the future.

The commodity price environment has significantly changed previously anticipated trends in the MMO market. With pricing pressures been felt throughout the MMO supply chain, global expenditure is anticipated to bottom out in 2016, as a substantial amount of MMO work has been deemed nonessential in the past 2 years and therefore it has been deferred. Nevertheless, Douglas-Westwood holds a positive outlook for the sector, with modifications spend expected to improve significantly between 2017 and 2021, while platform population and age of installed base will remain the long-term fundamental drivers.

Major contributors to global MMO spend will be Asia (24%) and North America (20%), while asset services will account for the majority of total service line expenditure at 60%, followed by modifications at 21%. Overall market spend is forecast at USD 457 billion over the 2017–2021 period, with an associated asset base of approximately 8,700 offshore platforms, while 480 new additions to the global population are expected over the forecast period.

Given its Opex nature, the MMO market is seen as an attractive industry sector even in times of commodity price instability, as offshore infrastructure needs to be regularly maintained, upgraded, and modified to ensure a safe, efficient, and legitimate production environment. However, the sharp reduction in MMO spend in the current cycle has taken the industry by surprise and has challenged many MMO service providers, with “survival of the fittest” being an undeniable reality of the sector.

Marina Ivanova is a Douglas-Westwood analyst specializing in supply chain mapping, and competitive analysis. She is involved in the production of quarterly market updates and is a contributor to the firm’s Offshore MMO, Downstream Maintenance and Upstream Investment market outlooks. She holds a First Class Honours in European economics with econometrics from the University of Kent.