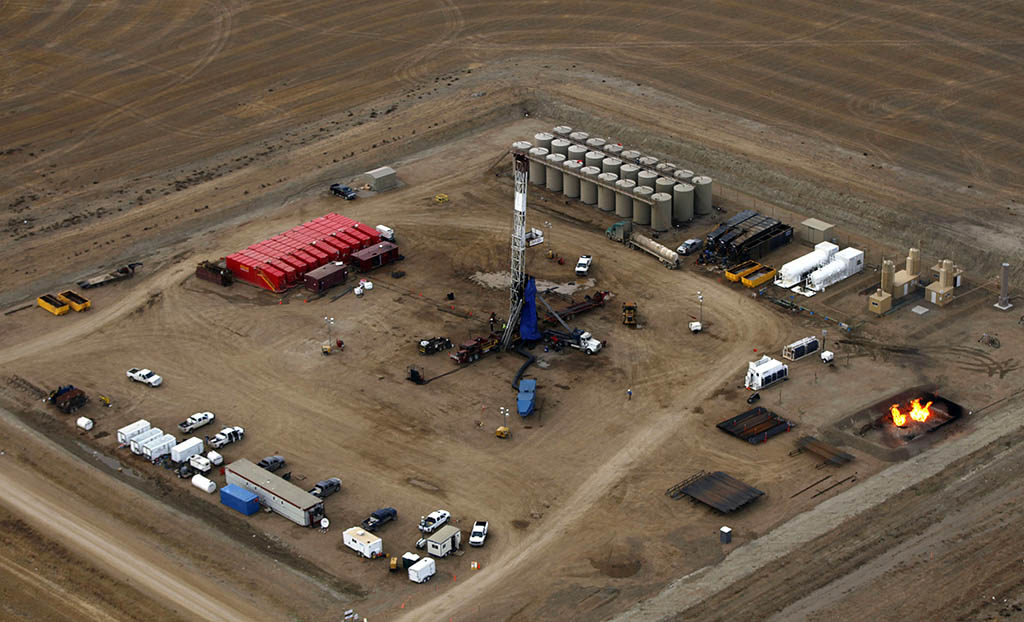 Source: sf.co.ua2016.
Completions of hydraulically fractured gas and oil wells, such as this well in North Dakota, are subject to the 2016 NSPS.

On 3 June, the US Environmental Protection Agency (EPA) issued three new rules to curb the emission of methane, volatile organic compounds (VOC), and toxic air pollutants from the oil and gas industry. The rules became effective on 2 August. The rules and the corresponding citation of federal regulations are:

This article addresses only Emission Standards for New, Reconstructed, and Modified Sources.

Methane is a potent greenhouse gas (GHG) with a global warming potential more than 25 times greater than that of carbon dioxide (EPA 2016). Although the definition of GHG includes six gases, in the context of EPA regulations and the upstream oil industry, GHG specifically refers to methane.

In March 2014, the US Administration issued the Climate Action Plan: Strategy to Reduce Methane Emissions. This was followed by announcing a new goal in January 2015 to cut methane emissions from the oil and gas sector by 40 to 45% from 2012 levels by 2025. EPA authority for the 2016 New Source Performance Standards (NSPS) stems from the Clean Air Act and the Administration Climate Action Plan.

The NSPS are the rules and standards set by the EPA for monitoring and controlling emissions from newly constructed oil and gas facilities. The definition of sources of emission as well as the definition of new facilities are explained in the rules.

EPA’s new methane regulations build on the 2012 NSPS. Before discussing the 2016 NSPS, an overview is given first of the 2012 NSPS.

In 2012, EPA issued NSPS to reduce smog-forming VOC emissions from new, modified, and reconstructed oil and gas sources. Those standards included the first federal requirements for natural gas wells that are hydraulically fractured, along with standards for other processes and equipment not previously regulated at the federal level.

The emphasis in the 2012 NSPS is on VOC. VOC is a general term for a class of organic compounds primarily made up of hydrocarbons. In the context of EPA regulations, the emphasis is on the main contributors to smog such as propane, butane, pentane, hexane, and heavier hydrocarbons.

The 2012 NSPS are cited in 40 CFR Part 60 Subparts OOOO (sometimes referred to as Quad O). The 2012 regulations did not address methane emissions.

The aim of the 2016 NSPS is to update 2012 standards to add requirements that the industry reduce emissions of GHG, specifically methane. It also covers hydraulically fractured oil wells and other activities in oil and gas production, processing, transmission, and storage that were not covered in the 2012 rules. The 2016 NSPS are cited in 40 CFR Part 60 Subparts OOOOa (Quad Oa).

The emission sources and relevant equipment covered by both the 2012 and 2016 NSPS at oil and gas wellsites are shown in Table 1. This is compiled from data available at the EPA website.

EPA estimates that about 27 Bcf of natural gas will be recovered in 2025 by implementing the NSPS. EPA estimates the final rule climate benefits to be USD 690 million; costs of compliance are estimated at USD 530 million. The quantified net benefits (the difference between monetized benefits and compliance costs) are estimated to be USD 170 million in 2025 using a 3% discount rate for climate benefits. All dollar amounts are in 2012 dollars.

The SPE has recognised the importance of emission control and the new EPA regulations. Methane emission was the cover story of the March 2015 issue of the Journal of Petroleum Technology (Rassenfoss 2015).

Several interesting SPE papers on the topic were presented at SPE conferences this year and last year. They address various strategies that operators can adopt to deal with the changing regulatory regime requirements to control emissions.

Future events will address methane emissions. A panel titled “Methane and Other Green Gases: Now What Do We Do?” is planned at the SPE Health, Safety, Security, Environment, & Social Responsibility Conference–North America in New Orleans in April 2017.

Curbing methane emission is, of course, a global concern and not just a US issue. Indeed, legislation in many countries does not allow venting to the atmosphere nor flaring of natural gas under normal operations (Bauer et al. 2012 and Saadawi 2013).

At the international level, efforts made to control methane emissions from the oil and gas sector are led by the Climate and Clean Air Coalition (CCAC). It is a global effort committed to improving air quality and protecting the climate that unites governments, civil society, and the private sector. The CCAC has created a voluntary initiative to reduce methane emissions in the oil and gas sector: the CCAC Oil & Gas Methane Partnership. It was launched in September 2014 (Climate and Clean Air Coalition 2016).

The CCAC Oil & Gas Methane Partnership is designed to help participating companies better understand and systematically manage their methane emissions and to demonstrate this to stakeholders. The initiative focuses on nine core emissions sources that account for the bulk of methane emissions in typical upstream oil and gas operations. Some international oil companies (Plisson-Sauné et al. 2016) and national oil companies (Atiyeh et al. 2016) took the initiative to monitor, control, and report emissions within their own operations.

The new EPA NSPS will have an impact across the oil and gas industry in the US. This is not just an environmental or an HSE issue. The interpretation and implementations of the new EPA regulations require understanding and contributions from various disciplines across the industry including facilities, drilling, completions, production, operations, petroleum engineering, management information, and R&D.

Although the new regulations present challenges to operators, by early adoption of a strategy to deal with the regulations in a comprehensive and systematic manner, there can be opportunities for a win-win situation.

SPE 173562. 2015. Strategies for Managing Greenhouse Gas Issues in an Ever-Growing Oil and Gas Industry by A. Woerner and L.Campbell.