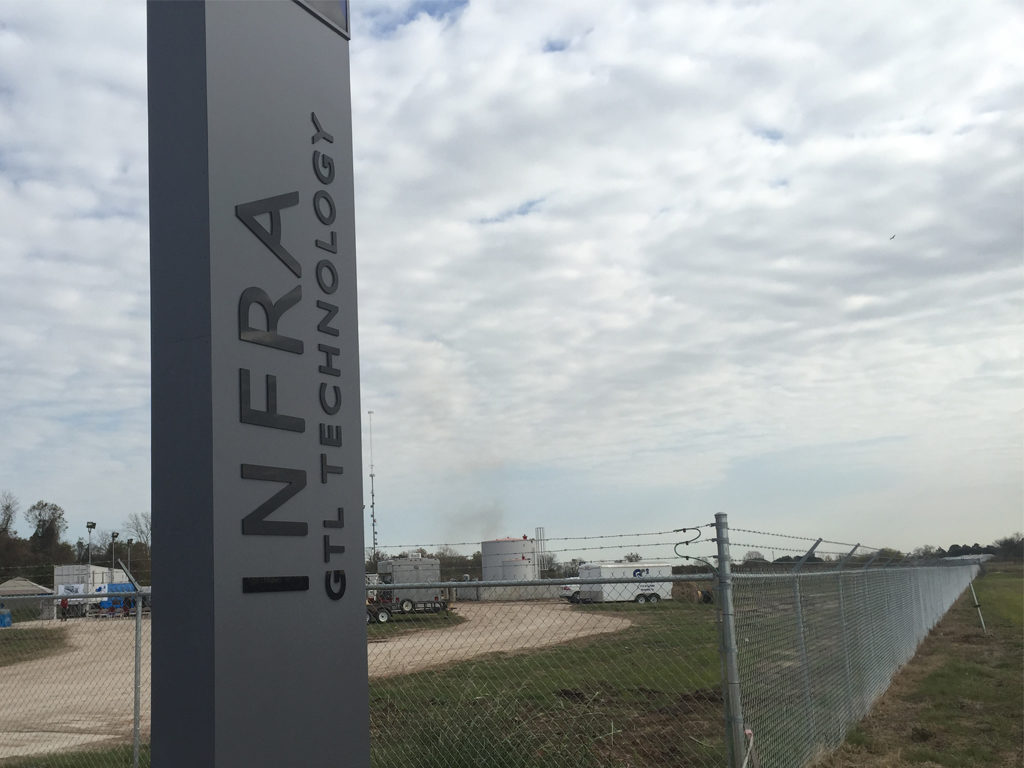 Infra Technology, a company specializing in the development of synthetic fuels from natural gas, coal, and biomass, opened the first completed small-scale commercial gas-to-liquids (GTL) project in the state of Texas. Located in Wharton, a small town 60 mi southwest of Houston, the plant will produce synthetic crude oil from natural and associated gas.

The Wharton plant is Infra’s first plant in the United States. The company has been operating pilot plants in Russia for the past 7 years.

Modularly constructed, the plant utilizes GTL technology based on the Fischer-Tropsch process, where hydrocarbons are created through a series of chemical reactions. The plant will operate in two stages. The first stage involves the production of synthesis gas (syngas) through a reformer that converts solid fuel into gaseous reactants. The technology processes feedgas with varying density, from dry methane to heavy gases.

The second stage of plant operation involves the production of synthetic crude through a series of Fisher-Tropsch reactors. Infra uses proprietary, pelletized cobalt-based catalyst in the Fisher-Tropsch reactors, causing a reaction between carbon monoxide and hydrogen that results in the formation of heavier, mostly liquid, hydrocarbons. The reaction is accompanied by cracking and other processes, helping to create a light synthetic oil consisting of gasoline and diesel fractions. Dmitry Popov, vice president of commercial at Infra, said this makes the technology in the Wharton plant unique.

“We are producing synthetic crude oil in the Fisher-Tropsch step of the process. Most other technologies are producing solid or intermediate products like waxes, and that means they need a third step [to produce synthetic crude], which can be very expensive when it comes to building a refinery. In our case, our product can be immediately blended or put in the oil pipeline,” Popov said.

Each Fischer-Tropsch reactor can produce approximately 300 g of liquid product per liter of reactor volume per hour. A three-dimensional reactor model of transport phenomena in the catalyst bed allows the integration of all calculations of heat and mass transfer.

The company’s first pilot plant allowed it to test Fischer-Tropsch synthesis in different single-tube and multi-tube reactors, with tube length ranging from 1,500 to 3,000 mm. After selling the pilot plant to VNIIGAZ Gazprom in 2013, Infra commissioned a larger scale full cycle pilot plant with a higher degree of automation and a more extensive data gathering system. It produces its Fischer-Tropsch catalysts from a factory in Moscow. The company is currently developing new catalysts that will allow the generation of a higher proportion of the diesel or kerosene fraction in the synthetic oil.

The plant will require a staff of 20 people to operate and maintain. Popov said the plant will begin operations after Christmas, estimating a conservative timeframe of 3 weeks from start-up to the first production of synthetic crude.

The Wharton plant could be a noticeable step in GTL development in the United States. Only six full-scale GTL plants are operating globally: 2 in Africa, 3 in the Middle East, and 1 in Asia. In December 2013, Shell canceled its plans to build a 140,000 bbl/D GTL project in Louisiana because of high estimated capital costs; the company already operates GTL plants in Malaysia and Qatar.