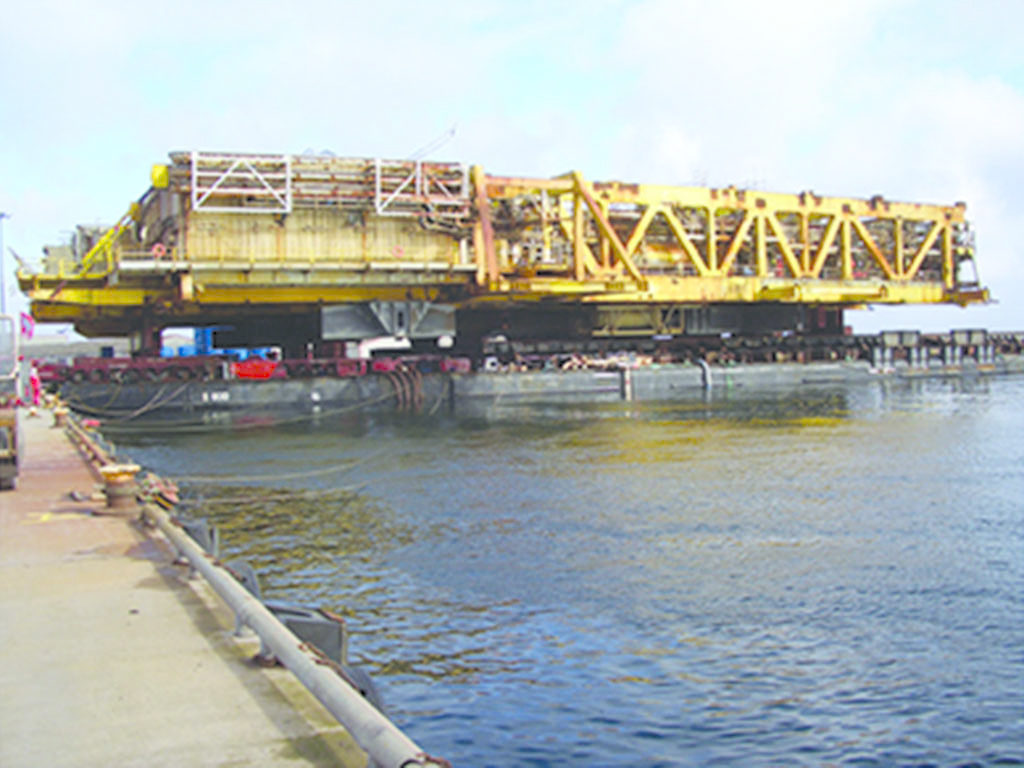 Photo courtesy of Shetland Decommissioning.
After more than 27 years in operation, gas production from the Frigg field in the North Sea was shut-in in 2004. Total began the removal operation in 2005 and completed the activities in 2010.

For example, the United Kingdom Continental Shelf (UKCS) has been producing oil and gas since the 1970s. Production peaked around 2000, but has since gone into decline. The infrastructure put in place in the North Sea will require decommissioning over the next 30 years. The North Sea infrastructure comprises mainly production platforms supported by large gravity-based concrete foundations or steel frames (jackets). There are also smaller structures floating on the surface or positioned on the seabed, and interconnecting pipework and wells.

The contract to Heerema for the decommissioning of nine platforms in the Norwegian Ekofisk oil field between 2008 and 2014 involves the removal of a total of 113,500 tons of materials, RAE said.

Storage cells are also an integral part of the concrete installations. The three concrete structures to be decommissioned in the Brent field have a total of 64 cells, each measuring 60 m in height.

A major part of decommissioning is well plug and abandonment (P&A). Shell data show that the average P&A cost on the Brent Delta is GBP 2.7 million per well, each taking an average of 30 days to complete, RAE said. There are 160 wells in the Brent field and the vertical depth of these wells typically ranges from 2800 m to 3000 m. Based on these figures, it could take more than 13 years to plug and abandon the Brent wells at a total cost of GBP 432 million.

Seven percent of the existing North Sea installations have been decommissioned, including three gravity-based structures (GBS), one large steel jacket, 19 other steel jackets, eight floating production  systems, six subsea production systems, 19 pipelines, and 11 other facilities. There were 18 active decommissioning programs last year. The estimated cumulative expenditure for decommissioning in the UK sector of the North Sea may be more than GBP 30 billion over the next 30 years, including new discoveries and incremental projects. 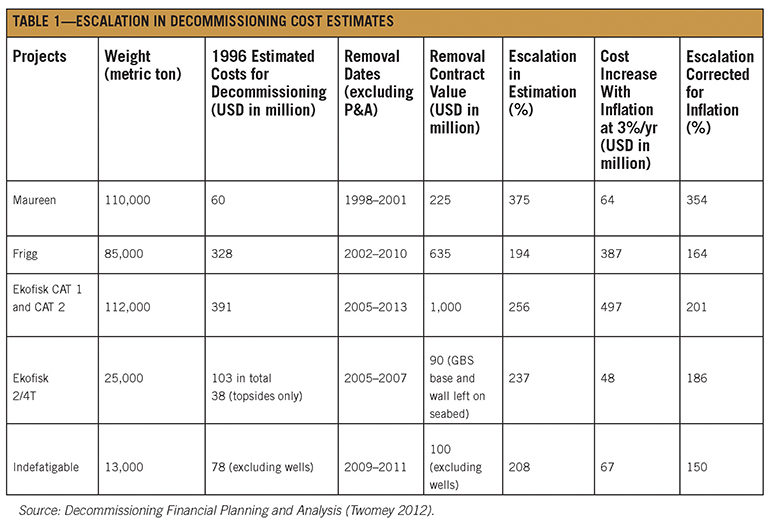 The removal of structures is often more complex than the installation because the platforms will have been modified with additional equipment over their years of operation. Generally, installations are removed in the largest sections possible; the job can be hampered by onshore dismantling facilities with limited handling capabilities. Although a decommissioning project may partially remove the deck in a season, the complete removal of topsides and the jacket may take more time.

Decommissioning costs are often made higher by decisions made during the initial engineering and construction stages of an offshore oil or gas field. Stokes (2014) said that project teams for new developments need to spend as much effort preparing for decommissioning in the design stage as in preparing for the maintenance of the platform.

Designing with a critical eye can go a long way toward reducing the decommissioning costs, which occur decades later. Twomey described a “denial culture” in the estimation of decommissioning costs. There generally is no coaching and the end-of-life stage is often thought of as “not on my watch” or “it’s not my business; I produce oil.” Because decommissioning is the end game, it is not part of an operator’s culture.

Although costs can be reduced during the actual decommissioning work with the use of previous experience, new technology, and contracting strategies, many costs are fixed because of the design features of the structure.

Fig. 1 shows the cash flow for a typical North Sea platform in 80 m of water with a throughput of 65,000 BOPD with a 15-year field life. Early cash flow is negative, and then becomes positive. A final negative cash flow is seen with decommissioning. The final decommissioning cost for this example (before a tax refund) was about GBP 800 million. During decommissioning, no revenue is generated to offset the cost.

By identifying the cost drivers of a project (Table 2), the design team can dedicate its resources and efforts in the preliminary engineering and detailed design stages to reducing significant costs. 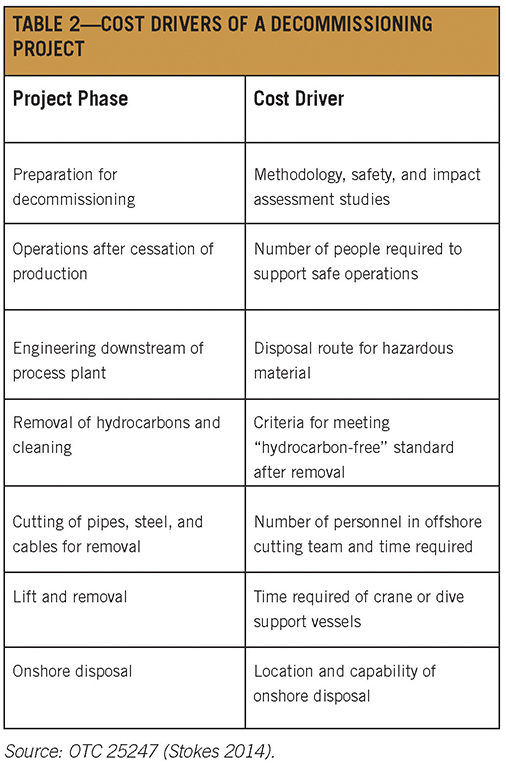 Stokes said that the first two priorities can be affected by decisions made in the design. Standardization in design can lead to cost savings in a new project and in decommissioning. A standard design can result in saving costs for structure removal because of familiarity with the tasks previously completed on a platform. If a series of identical platforms are removed, a cost reduction of 10%, platform after platform, could be achieved, he said. The 10% reduction could be calculated into the decommissioning cost estimate at the conceptual design stage.

Stokes described companies’ approach to project development in Fig. 3. To provide an allowance for decommissioning, he proposed assigning 25% of the total newbuild cost as a negative cash flow at the end of field life to each option considered in the “Identify” stage.

Decommissioning costs can be reduced with consideration of the following in the “Define” stage in Fig. 3. Although the suggestions seem straightforward, they are often overlooked. The suggestions are:

For compliant structures, the recommendations include the following:

The RAE estimated that the lessons learned from the decommissioning of an installation may reduce the cost from 10% to 15% for successive facilities. Often, companies that take the lead on innovation find that they incur the costs of innovation, while those that follow gain all the advantages without the costs. Thus, there can be a “race to be second” throughout the industry.

It is important that innovation is encouraged and developed. Mistakes and failures in the planning and execution of decommissioning in an optimal way are costly for the companies involved and industrywide. Therefore, the sharing of knowledge and learning from others’ successes and mistakes is in the interest of all parties.