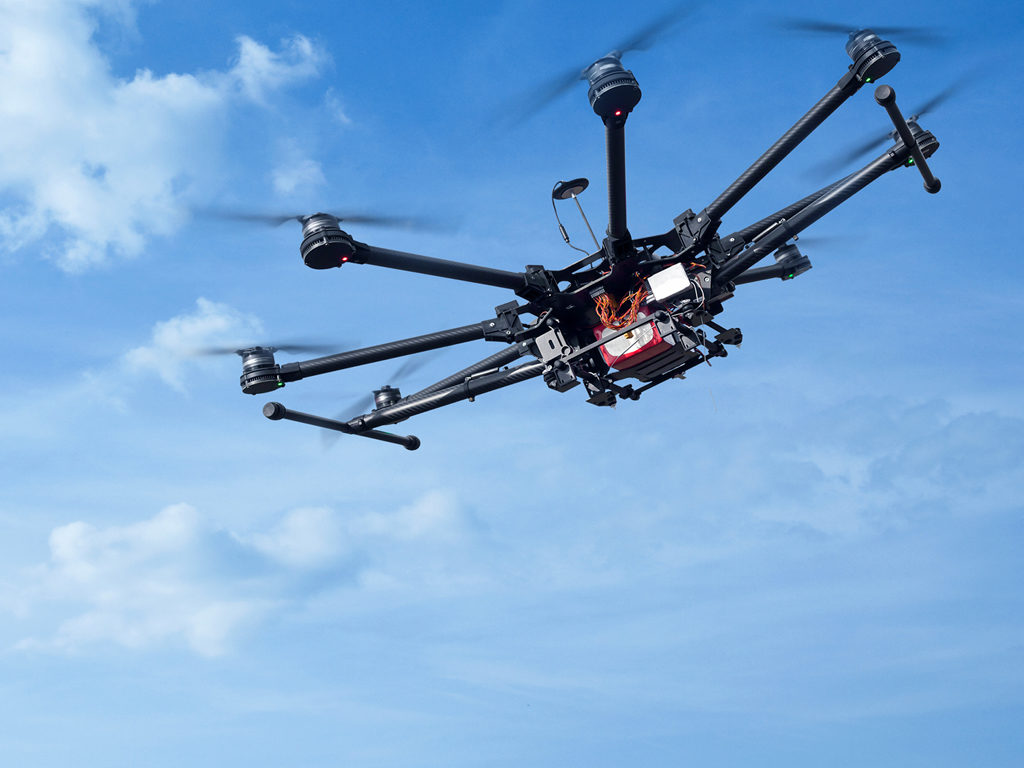 With oil prices slowly emerging from the depths of the downturn, operating companies are still trying to find ways to save money. Unmanned aerial vehicles (UAV), also known as drones, can be equipped with a variety of imaging devices and sensors to capture enormous amounts of data in a short amount of time. Drones may offer these companies a reliable solution to support their operations by accessing areas that would otherwise be difficult or impossible without extensive manpower and support. As the technology continues to develop, it could become the primary method of facility inspection and monitoring, as well as a rapid response and assessment tool for offshore and onshore incidents.

A closer look at recent UAV regulations and sensor technologies shows the areas in which this industry could have a major impact on oil and gas projects in the future.

Market Growth and the Regulator

Drones have the potential to grow into a massive industry within the next decade, but finding a consensus opinion on just how much it will grow is a difficult task.

A report in January 2015 predicted that the commercial drone market would be worth more than USD 4 billion by 2021, with significant growth in oil and gas mapping applications helping to drive an increase in revenue. A report from the US Congressional Research Service released in September 2015 noted a handful of different forecasts on the industry’s future, with some organizations predicting growth to USD 14 billion by 2025. Another report released last November predicted that drones would be a USD 28 billion market by 2022.

Colin Snow, founder and CEO at Skylogic Research, said the aggressive growth projections are commonplace in drone market analysis, and that the proliferation of divergent opinions makes it necessary to view a lot of reports with some degree of skepticism.

“You think you might have the answer, but everybody kind of has a different answer when they try to pin it down,” Snow said. “If one goes about to try and find a proper answer to this question of how big is [the drone market], you see people put charts up. I go to conferences and everyone puts a chart up. So, from the very inception of this industry, we’ve always seen these huge upticks.”

Last July, Skylogic released several reports examining the role drones may play in specific sectors, including surveying and facility construction and inspection. In one report, Snow wrote that Part 107 of the US Federal Aviation Regulations, passed by the US Department of Transportation Federal Aviation Administration (FAA) in June, should allow for easier inspection of various facilities, including oil rigs and refinery flare stacks.

Part 107 covers a spectrum of commercial uses for drones weighing less than 55 lb. It allows operators to fly drones in daylight or twilight with appropriate anti-collision lighting. Drones cannot fly over anyone not directly participating in its operation, under a covered structure, or inside a covered stationary vehicle. The regulation establishes a maximum height for drone flight (400 ft above ground, or higher if the drone is within 400 ft of a structure) and a maximum speed of 100 mph.

Operations in FAA Class G (uncontrolled) airspace are allowed without air traffic control permission, but other airspaces (Classes B, C, D, and E) require approval. Most importantly, operators may request a waiver of most operational restrictions if they can show that their proposed operations can be conducted safely.

The waiver requirement of Part 107 applies to nighttime operations and operations beyond visual-line-of-sight (BVLOS), which Snow said would make thermal inspections more difficult—it is more difficult to decipher warm air escaping from a structure during daylight hours.

Facility Inspections in the Gulf of Mexico

As a central hub of offshore development, the US Gulf of Mexico (GOM) offers an opportunity for companies to examine the monitoring capabilities of drone systems on deepwater production platforms. At a presentation hosted by the SPE Gulf Coast Section’s Health, Safety, Security, Environment, and Social Responsibility Study Group last September, Balaji Ramachandran, an associate professor of geomatics at Nicholls State University, discussed the work being done by his department with operators and US government agencies to test drones in the inspection of offshore platforms and overall infrastructure monitoring.

Ramachandran said the drone sensors had several potential applications, both in visual-line-of-sight (VLOS) and BVLOS. In VLOS, they can help operators remotely monitor and inspect critical offshore infrastructure. They can also provide air pollution monitoring and monitor marine mammal and bird activity near a given facility. With BVLOS, they could help with onshore pipeline corridor mapping and monitoring, disaster response and recovery, oil spill detection, and facility security operations.

“We know a bit about the remote oil monitoring sensors. Everybody knows about optical, thermal, infrared, LiDAR [light detection and ranging], SAR [synthetic aperture radar], and so on. They are good. But then, we want to design something active. Can we put a dipping sensor on there, or a dropping or towing sensor, from the drone that goes and grabs the data? We’re putting the vision out there,” Ramachandran said.

For facility inspection, Ramachandran said the industry needs to develop and validate a standard operating procedure for the technical requirements and safe use of drone technology. This includes the testing of any additional sensors that are part of the inspection regime, as well as the geo- and time-tagging of images for archiving.

The Draganflyer X6 is a drone that Nicholls State has worked with for this purpose. It has a 335-gm payload, carbon-fiber body, and was equipped with the Panasonic Lumix DMC-ZS20, a 14.1-megapixel camera, for surveillance and real-time monitoring workflow.

Shell paid approximately USD 250,000 for use of the Draganflyer X6 over its Mars platform. The Nicholls State team performed a system review, double-checked the safety protocols, and submitted an application containing key plots and coordinates of the deepwater platform to the air traffic controller responsible for the necessary waivers. Ramachandran said the primary goal was to develop effective operating procedures. His larger goal was to develop a full-scale model using the drone that could, in time, gather useful data. However, in the initial stages of the project, Shell wanted it to capture high-resolution images of the flare stacks (Fig. 1) and any structural instabilities on the platform.

“What happens when you take a drone on? What happens to the battery? Is it safe? Can it fly? Potentially, in Phase 2 [of the project] we’d want to look at testing of the sensors. They were very happy if we could take an image, geotag it, time it, and put it into a report without turning off the production platform. That was a big thing for Shell at the time,” Ramachandran said.

The drone took several images of the flare stacks, subdecks, and other areas of the platform. Ramachandran said Shell was pleased with the results, even though the drone did not gather any quantitative data for study. The value of performing unmanned facilities inspections will become more apparent for operators looking to reduce cost and risk in the future.

“You can go up close without putting someone in harm’s way, and you can capture some of the images,” Ramachandran said. “Then, you can use image processing platforms to automatically pick those [images to review]. That’s what the second phase of the project is something I really want to do.”

To minimize risk and reduce the cost of plant inspection in difficult-to-access areas, engineers with PTT Exploration and Production (PTTEP) in Thailand developed a drone, the multipurpose plant inspection octocopter (MPIO), with “plug and play” imagery options to perform a wide range of aerial monitoring and inspection functions.

PTTEP’s primary goal with MPIO is to improve its flare stack inspection processes, which are often performed in turbulent air conditions. The company typically used one of two methods of inspection: in-service (live flare stack) inspection, where the flare stack is inspected during plant operation, and out-of-service inspection. Each method entails looking up from ground level via binoculars. Kridsada et al. (2016) wrote this was a “not at all satisfactory” method because it is hard to identify anything in the flare stack in detail. An optional solution is to use a manned helicopter to fly by the flare stack and inspect it, taking photos as required. While it may provide good-quality detailed pictures, the process has added safety risks associated with maneuvering a helicopter around and over an operating plant, along with helicopter operating costs that Kridsada et al. called “exorbitant”—PTTEP estimated a cost of USD 60,000 per flight.

MPIO is an 8-axis, 8-rotor drone filled with 15-in. carbon-fiber rotor blades and a carbon-fiber body. It was built with a parachute system that can be activated manually if the motor fails—PTTEP considered auto activation but the idea was discarded because of the possibility of improper activation—and a 20.4-megapixel camera that operates with complementary metal-oxide-semiconductor (CMOS) technology. A stabilizer unit allows for 3D control.

PTTEP tested the drone at a small, onshore oil field in Sang Kajai, Thailand, which contained an oil pumping unit, offloading unit, and a flare unit (Fig. 2) designed for a maximum of 500 MSCFD flow rate, with flare gas consisting of primarily methane. The flare is a non-assisted single-point elevated flare approximately 15 m high. PTTEP estimated that the MPIO could perform a live inspection at approximately one-tenth of the cost of a conventional inspection, with significant cost savings coming from the lack of additional safety measures typically used with manned helicopters, such as additional scaffolding.

The MPIO will undergo further testing to prove its reliability. If those tests are successful, PTTEP expects to perform aerial inspections of vertical vessels, and possibly flowline inspections, in areas difficult to access via traditional means, such as swamps and waterflood areas.