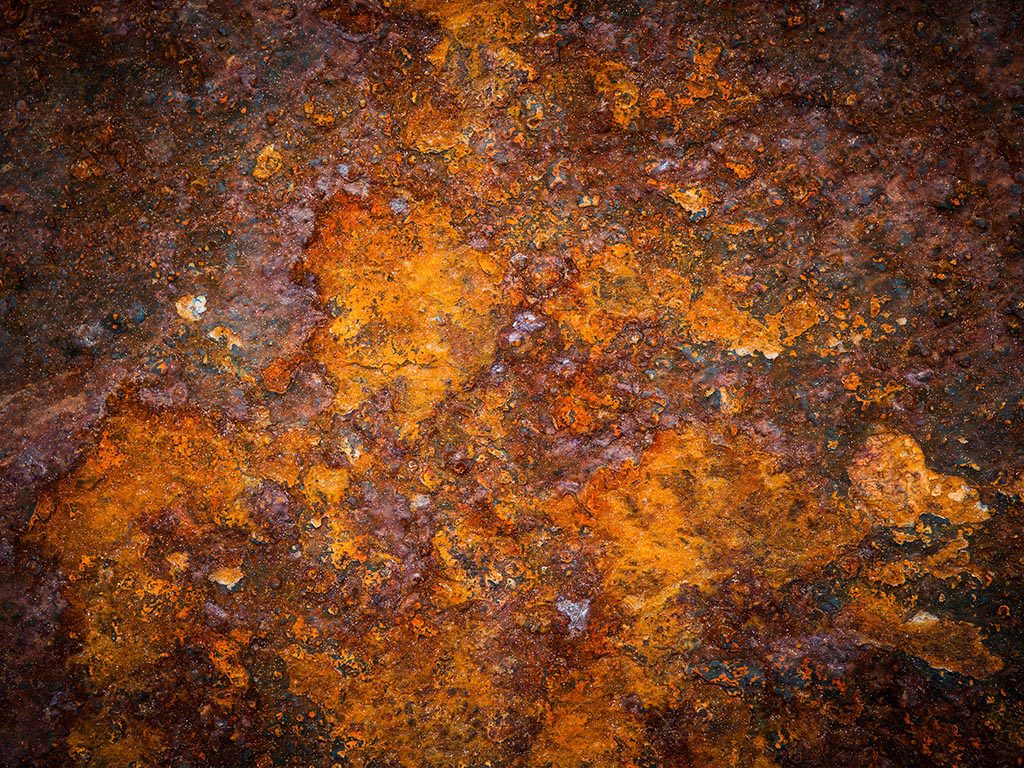 The shape of the corrosion pit sides and bottoms often provides important clues in diagnostics. The sample must be clean. Dipping the sample in concentrated hydrochloric (HCl) acid is one possibility. The immersion should not be too long because some original features could be modified. Disposal of the spent acid can be a problem, especially if sour. Light grit-blasting in a blast cabinet is a better option when available. Sometimes, cutting or slicing a sample beforehand is necessary to expose feature areas. The corrosion features in the sample piece must be developed enough to see either with naked eye or at low magnification. Identification of very small features can be difficult.

Oxygen (O2) does not occur naturally in oil- and gas-producing formations. Its source is air that has been introduced as a consequence of producing the oil and gas. Gaseous O2 is also not corrosive at oilfield conditions, unless dissolved in salt water. The corrosive effect of oxygen is often combined with CO2 and/or H2S. In isolated cases, other oxidizing agents such as chlorine or chlorine dioxide are added to the oilfield waters; the result can be almost the same as when oxygen is added.

Dissolved CO2. If dissolved CO2-only leads to pitting corrosion, the pit will be straight-sided and flat-bottomed, with mesas of nearly uncorroded metal between the pits. The pits are usually clustered and are triggered at gas-breakout areas such as in pump parts or the upper side of sucker-rod joints higher in a well. These pits will occur only in wells where the dissolved H2S content is less than 10 ppm where the surface film is iron carbonate.

In some cases, pits caused by dissolved CO2 have some of the character of pits caused by acid-reducing bacteria (ARB) activity. Questions about bacterial activity are appropriate, such as those involving bottle results, service temperature (bacteria are less likely to cause damage above about 140°F), and flow conditions.

Dissolved H2S. Dissolved H2S is sometimes associated with dissolved CO2; only a small amount of H2S changes the corrosion morphology because an iron sulfide is formed on the steel surface. H2S corrosion manifests as pitting corrosion. The pits have relatively sloping sides, with one smaller pit at the bottom of the larger pit. The entire pit is typically from 1/8 to 3/8 in. in diameter when dissolved H2S is the sole mechanism. Systems producing this type of pit will have any amount of dissolved CO2 and 10 ppm or greater of dissolved H2S. These pits, especially in their early form, can be confused with pits caused by sulfate-reducing bacteria (SRB) activity, so relevant questions include those involving H2S concentration and bacterial-culture-bottle results.

Pits in systems containing between 10 and 20 ppm dissolved H2S usually produce pits with a blend of the previously described characteristics and those of dissolved CO2 pits.

If a well with CO2 or H2S corrosion does not receive a sufficient amount of corrosion inhibitor, pitting caused by H2S or CO2 will be much worse in the top section of the wells. Inhibitor is introduced at the bottom of the well, and it is partially consumed as it comes up the wellbore. A general rule is to apply a minimum of 1 gal of inhibitor per week per 2,000 ft of well depth for rod-pumped wells, and 1 gal per week per 3,000 ft of well depth for non-rod wells such as electrical submersible pumps (ESP). When the produced volume is high, the inhibitor volume requirement is more, but as in all cases, the final decision should be made on the basis of corrosion monitoring.

Photo, schematic, and description of O2/H2S corrosion are shown in the figure below. 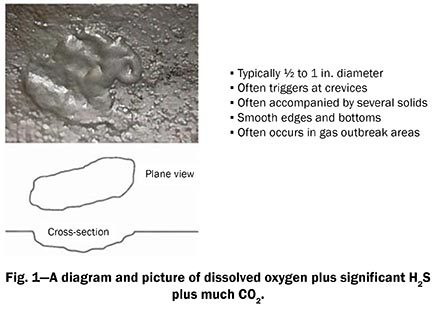 Small amounts of dissolved oxygen in a sweet (mostly CO2) system result in little or no change to the morphology of pits caused by CO2 alone; they simply grow much faster. The maximum mil-per-year (a mil is one-thousandth of an inch) corrosion rate of uninhibited corrosion in moderate-temperature sweet systems is approximately the concentration in ppm of dissolved CO2 divided by 25. Rates higher than this are the result of CO2 plus O2, or of another mechanism such as bacteria.

A common method of oxygen entry into pumping wells is air breathing into the annulus. This oxygen, mixed with produced fluids at the bottom of the well, is at least partially consumed as it comes up the wellbore. Therefore, corrosion will be worst in the bottom section of the well, the pump, and lower tubing and rods.

A special case of oxygen entry in long-stroke, low-pressure rod-pumped wells can be loose packing in the stuffing box. In these cases, air can be pulled into the small space below the stuffing box on the downstroke and mixed with produced fluid. The pumping tee, upper end of the top tubing joint, and early section of the flowline can suffer oxygen-accelerated corrosion. The corrective action in this case is to apply a polish rod lubricator and keep it filled with 2 parts oil and 1 part oil-soluble corrosion inhibitor.

Nearly all wells and surface systems are contaminated with bacteria during drilling, fracturing, or production operations. The types of bacteria usually causing difficulty in wells and associated surface facilities are SRB and acid-producing bacteria (APB). These types of bacteria do not eat metal, but they can colonize and set up cells where corrosion can accelerate. Bacteria can also cause problems because the slimes they produce can catch debris to cause deposition or plugging. Sulfate-reducing types produce H2S as a byproduct, so if these are not controlled, a sweet reservoir can become sour.

It is common for H2S or CO2 pits to form, catch debris, and then become harbors for bacteria colonization. The final result often shows some of the characteristics of both periods. Pitting characteristics of each are described in detail in the complete paper.

Bacteria Colonies. One of the products produced by APB is acetate, which can also be one of the food sources of SRB. One of the products of SRB is a polymer biomass that APB favor as a harbor. Therefore, it is no surprise that corrosion pits often contain both types of bacteria. Pits resulting from these colonies show some of the characteristics of both types. Sometimes a corroded piece of metal will contain pits resulting from either type, with a few much deeper. It is quite likely that the deeper pits contain both types of bacteria.

How To Optimize Tubing Material Selections Using the PREN Value

Material selection is a first line of defense against corrosion. This article reviews how to recognize pitting and crevice corrosion, as well as how to optimize tubing material selections for marine oil and gas applications based on the material’s PREN value.

Westcoast Energy revised its inspection practices following the 2018 incident. Its model used to predict crack growth did not take into account all uncertainties