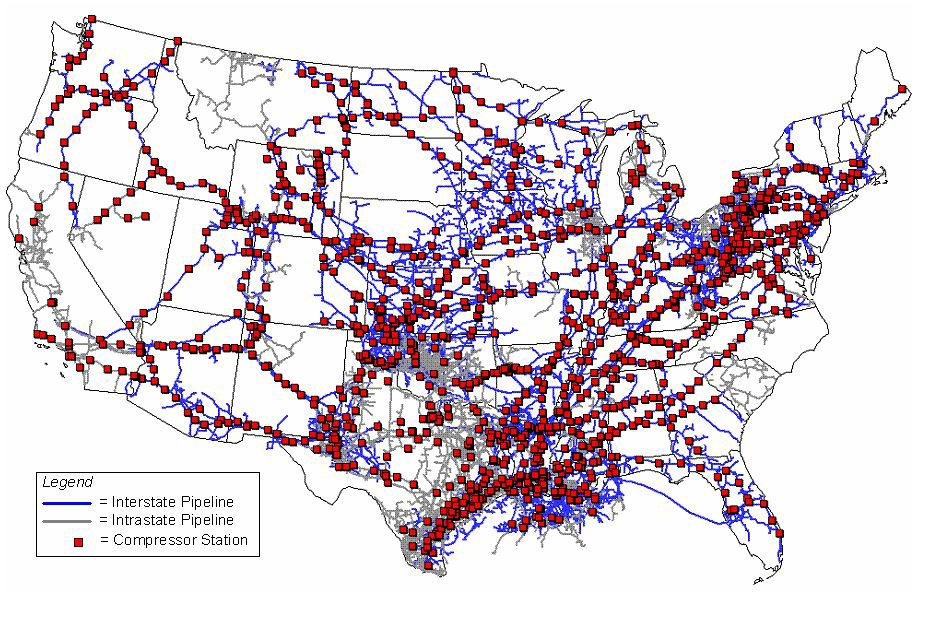 The turbine and reciprocating engines that work to pressurize natural gas for pipeline transport understandably make noise. What’s not understandable to many West Virginians is why the state’s Department of Environmental Protection (DEP) came to a decision to drop the noise regulations for compressor stations, many of which are moving gas from the Marcellus Shale.

The DEP removed wording from a streamlined permit for compressor stations and dehydration facilities, in part, as the result of a letter from the West Virginia Oil and Natural Gas Association (WVONGA). The permit stated that such operations “shall not create a nuisance to the surrounding community by way of unreasonable noise and light during operations.” That condition (Section 3.2.8) was struck from the Class II General Permit G35-D, which was issued on 27 January.

Last December, DEP’s Division of Air Quality (DAQ) provided notice to the public of a preliminary determination to issue G35-D for natural gas compressor and/or dehydration facilities. The 30-day public comment period ended on 23 January, the day the agency received a letter from WVOGA expressing its concerns about Section 3.2.8.

In her letter to DAQ, WVONGA Executive Director Anne Blankenship wrote, “Our members have cumulative investment of nearly ten billion dollars in West Virginia, account for 80% of the production and 90% of the permits, operate more than 20,000 miles of pipeline across the state and provide oil and natural gas to more than 300,000 West Virginia homes and businesses.” She added, “The West Virginia Air Pollution Control Act only gives the DAQ the authority to regulate air pollutants, and air pollutants are defined as ‘solids, liquids, or gases which, if discharged into the air, may result in statutory air pollution.’” … “Even if it [the agency] could, the prohibition of a ‘nuisance’ and ‘unreasonable light and noise’ is too vague to enforce, as it gives the permittee no guidance as to what constitutes permitted behavior.”

The noise and light issue has been simmering for some time. About 5 months ago, the DEP defended the language against a legal challenge from WVONGA. The agency’s about-face came after a new governor’s administration took office, which raised eyebrows among the public, landowners, and environmental groups. Viewed in the light of the Trump administration’s calls for regulatory restructuring, including the US Environmental Protection Agency, advocates for the noise limits fear that this change may portend what lies ahead in deregulation across federal, state, and local jurisdictions.

Used in gathering pipeline systems and interstate transmission systems, compressor stations are necessary to keep natural gas moving through a pipeline because distance, elevation differences, and friction affect its movement and reduce pressure. The pressure is also affected by receipt or delivery of gas along the route.

In a 2007 report on the interstate transmission system, the US Energy Information Administration (EIA) said there are more than 1,200 compressor stations in the pipeline network, usually situated between 50 and 100 miles apart along the length of a pipeline system. The average station is capable of moving about 700 MMcf/D of natural gas, while the largest can move as much as 4.6 Bcf/D.

Those 1,201 stations comprised more than 4,700 individual compressor units, or about 4 units per station with an average of 3,590 hp/unit. Approximately three-fourths of all compressor stations had an installed hp below 20,000.

Because they provide only a boost in pressure, interstate transmission system compressors are generally smaller facilities than gathering system compressors. Based upon 1,000 compressor stations for which data were available on the intake and out-take pressures, the average ramp-up in pressure per station was 250 psig. The highest discharge pressure was in the range of about 1,500 to 1,750 psig, mostly to 42-in. and 36-in. diameter pipelines.

Although the data are 9 years old and expansion projects have been completed since then, the scope of the potential noise issue becomes clear.

How Significant is Noise Generated From Compressors?

Answer: “Depends on how close you live to them.” Electricity providers face similar challenges in the siting of power lines and substations—often considered eyesores. The siting of wind turbines provides another example. While people in general acknowledge the benefits of the infrastructure in terms of jobs, energy provision, and an economic boost to an area, a “not in my backyard” viewpoint is common.

Noise is generated at compressor stations from a number of sources, including turbomachinery (gas turbines and compressors), airflow through inlet ducts and scrubbers, lube oil and gas coolers, exhaust stacks, auxiliary systems, and emergency and routine maintenance blowdown events. The level of noise a compressor generates depends on the compressor type, sound mitigation technologies used, the slope of the land surrounding the compressor, ambient air temperature, etc.

Regulation of emitted noise is done by different agencies, depending on whether the station is connected to a gathering system or interstate network.

The Federal Energy Regulatory Commission (FERC) handles the regulation of interstate networks, but does not include compressors that are tied into gathering lines. It requires that the noise level cannot exceed an amplitude of 55 decibels (dB) day/night average sound level (the National Safety Council characterizes 55 to 70 dB as the level of noise emitted by a dishwasher) at the closest noise-sensitive area (NSA). An NSA includes occupied residences, places of worship, and other locations

Because natural gas within a gathering system can arrive at a station at different pressures depending on the pressure of the wells feeding the system and the distance from the wellhead to the compressor, it is compressed to transmission pressures of about 800 to 1,200 psi before entering an interstate transmission system. To provide an adequate boost in pressure, the gathering system compressor stations are larger than those for interstate transmission systems and usually comprise 6 to 12 compressors.

Compressor stations that are part of a gathering system may be regulated by a state or municipality. The state regulations, if they exist, are generally vague, with wording such as “To constitute a nuisance based upon noise, the question is whether the noise is unreasonable and unnecessary considering all of the circumstances involved” [Pennsylvania]. Ohio courts have noted “what amount of annoyance or inconvenience will constitute a legal injury, resulting in actual damages” cannot be “precisely defined” and is “dependent on varying circumstances.” The Texas Railroad Commission explains on its website that it “… has no statutory authority over noise or nuisance related issues. Noise and nuisance related issues are governed by local ordinances.”

At the local level, the City of Fort Worth, Texas, regulates compressor noise levels at the wellsite and along pipelines. The ordinance sets the following maximum permitted sound levels measured at the property line of the receiver.

The ordinance allows pipeline compressor operators to demonstrate that the current actual ambient noise level is above these levels. Allowances are also made for temporary lift compressors at wellsites. Permanent lift compressors must comply with additional standards related to the use of acoustical structures, such as the prohibition of the use of sound blankets.

Other oil and gas activities also create noise, which has come under closer public scrutiny as shale drilling increased in the US. Table 1 shows sound levels associated with typical environments and with selected oil and gas activities. Table 2 shows measurements and estimates made by typical exploration and production operations.

In addition to the amplitude (dB) of the sound, its frequency (Hz) is another important consideration in determining how far the sound may travel.

Fig. 1 shows the modeled noise propagation of compressor station 587 in the Tioga State Forest. It shows the overlap with recreation opportunity spectrum (ROS) areas, which are classified along a continuum, from primitive to developed, representing the degree of their wild character and restricted land use activities.

The author highlighted the need for additional research and “ground-truthing” to evaluate the actual sound levels across the landscape.

Public complaints about noise levels increase as exploration and production activities become more concentrated in a geographic area. As production grows, so too does the need to transport the gas. If pipeline network expansion occurs, additional compressor stations are required for pressurization. More compressors or higher-power compressors equal more potential for noise.

Pipeline operators, whether motivated by regulations/ordinances or by their desire to build trust among the public, use many techniques to control the sound emissions from compressors. For example, Southwestern Energy operates more than 300 compressor units at 65 stations. It selects placement sites located away from residences and other occupied areas and conducts sound surveys before and after the installation of a compressor station. If a reading at a nearby residence exceeds 55 dB (the Arkansas Oil and Gas Commission’s limit for all NSA near natural gas compressors), the company takes corrective action to reduce sound exposure.

Mitigation techniques used across the industry begin with the design of the station, equipment, and sound-absorbing systems; well-insulated sheds or buildings to house the compressors, silencers for engine exhaust and air intake systems, and high-efficiency fans in the natural gas and water-cooling equipment.

Southwestern Energy uses larger piping than typically used in compressor stations to keep the gas velocity low to reduce the continuous high-frequency sounds. If sound levels exceed the 55 dB limit, the company constructs buildings over mechanical equipment to reduce sound levels. It spends between USD 145,000 and USD 200,000 per compressor to enclose them.

Mitigation May Not Avert Litigation

To be a good neighbor, don’t be objectionable. Compliance with regulations may be inadequate if a company’s actions remain objectionable, a term which is admittedly nonspecific but which may open the door to further scrutiny and accountability.

A case brought against a Texas pipeline company illustrated the results of a compressor station becoming a legally defined “permanent nuisance.”

The Natural Gas Pipeline Company of America (NGPC) began operating a gas compressor station in Lamar County, Texas, in 1992. Many of the property owners in the area complained about the noise (described as sounding like a large diesel truck that became loud unpredictably during the night and day) and odor (described as rotten eggs or car exhaust). Over 6 years, they repeatedly and frequently reported the problem to the company and the Texas Commission on Environmental Quality (TCEQ). In 1998, The TCEQ cited the operator for exceeding permitted emissions levels with a category 5 violation, the most severe.

Two months later, 12 property owners sued NGPC, alleging that the noise and odor were a permanent nuisance. The company raised the height of some of the station’s exhaust stacks by 30 ft and changed the oil used in the compressor engines from natural to synthetic.

NGPC argued that the TCEQ considered the mitigation actions to have adequately solved the emissions violations, and subsequent air testing supported that conclusion. However, some of the plaintiffs testified that the odor had yet to improve and in some instances had become worse instead of better.

The case proceeded to trial with a jury awarding the plaintiffs more that USD 1 million for their lost property value. The case progressed to a court of appeals and the Supreme Court of Texas where it was decided in 2012 in favor of the plaintiffs, nearly 14 years after its initiation.

Before the case was decided by the Supreme Court in 2012, Charles Sartain of Gray Reed & McGraw offered a cautionary blogpost: “If you operate wells, gas plants and similar facilities in populated areas, address your neighbors’ concerns. This could lead to increased costs and inconvenience in operations, but it might be cheaper in the long run. It sometimes isn’t enough to comply with laws and regulations if your activities are objectionable to your neighbors.”