In 2017 Canada will become the fifth-largest producer of crude oil in the world. As the Canadian crude oil industry has grown it has become increasingly complex. Production ranges from extra-heavy crude oil as thick as molasses from the vast oil sands regions of Alberta to a rapidly expanding liquids-rich focused industry in northeastern British Columbia. Production methods are equally varied: ranging from conventional vertical wells, to unconventional horizontal multistage fracturing, ultradeep offshore and oil sands mining and in-situ thermal-assisted extraction. 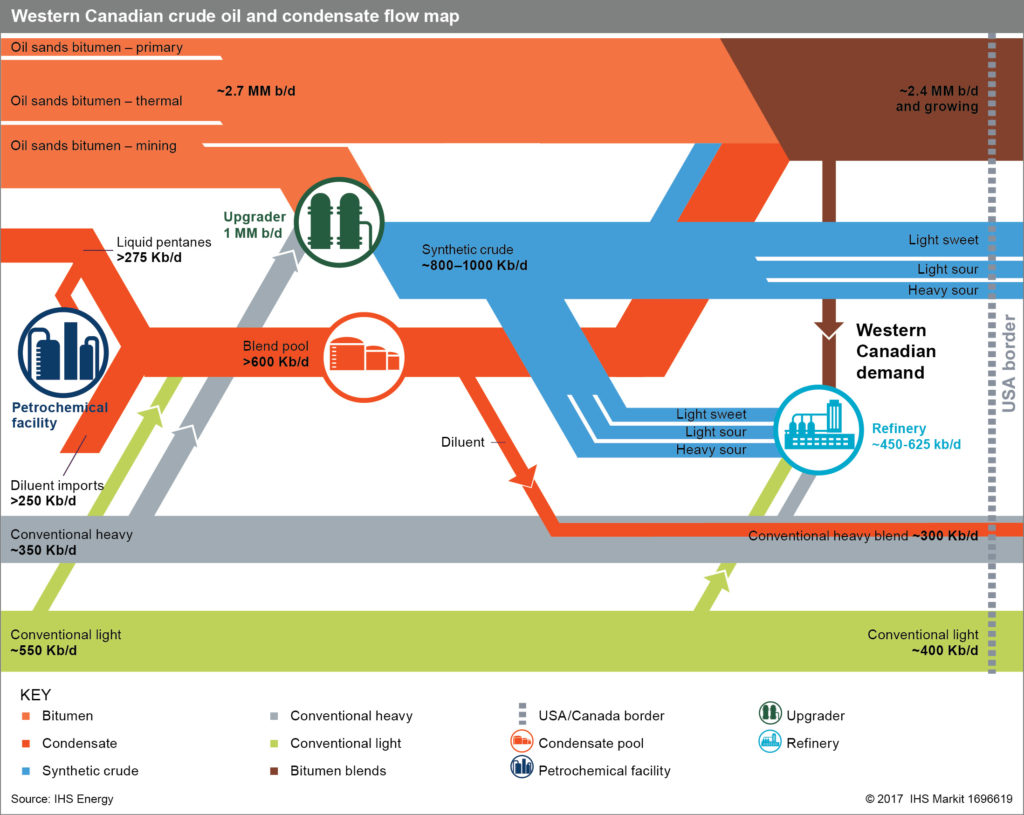 In western Canada, large parts of oil sands production are interconnected with specialized heavy processing units known as upgraders which convert extra-heavy crude oil into light crudes. An intricate system of gathering lines connects dispersed western Canadian production with key market hubs in central Alberta and then on to US markets. In western Canada alone, there are over 60 distinct crude streams ranging from 8 °API to a light gravity of more than 50 °API and include all flavors in between.

Canadian oil sands dominate both light and heavy oil production in Canada. Even with the large-scale Fort McMurray wildfire-induced production outages last year, oil sands production topped 2.4 million B/D in 2016. This places oil sands alone on a scale equivalent to Venezuela—the 13th-largest producer in the world. Bitumen, the prevailing source of western Canadian production, accounted for about two-thirds of oil sands production, while upgraded bitumen, a light synthetic crude oil (SCO) accounted for the remainder. SCO is the largest source of light crude oil supply in western Canada—accounting for nearly three-quarter of a million barrels.

In western Canada, production and supply have distinct meanings. In 2016, western Canada produced 3.6 million B/D of crude oil and supplied 3.9 million B/D. Supply is greater than production because western Canadian heavy crude is often blended with lighter liquid hydrocarbons to allow for pipeline transport. This blending requirement is large and growing—requiring anywhere from 10% to over 50% volumetric addition for oil sands bitumen to flow in a pipeline (depending on choice of diluent). As a result, there exists a large domestic market for lighter crude oils for use in bitumen blending. The single-largest source of diluent is natural gas condensate, but SCO, light conventional, and refinery byproducts are also used.

The energy landscape in western Canada continues to evolve. The deployment of solvent-assisted-steam assisted gravity drainage (SA-SAGD) poses the largest advancement in production techniques in the oil sands, and if scaled up, could further reduce extraction costs, while lowering diluent demand and greenhouse gas emissions alike. The exploitation and proliferation of liquids-rich gas plays continues to be stimulated by the secondary market for light crude oil as diluent, resulting in an ever-changing crude slate in western Canada.

Dominik Rozwadowski, IHS Energy market research analyst, North American Oil, supports research efforts for North American crude oil analytics. He contributes to the delivery of market research concerning crude oil supply and demand balances, transportation by pipeline and rail, price forecasts, and geopolitics. Before joining IHS, he worked at the Canadian Energy Pipeline Association, where he collaborated with North American pipeline companies on program development for operational issues related to regulatory reform, the environment, and pipeline safety. Earlier, at Nabors Drilling, he gained field experience at a number of oil and gas fields in northern Canada. Rozwadowski holds a bachelor of commerce degree and a bachelor of arts degree from the University of Calgary.

The article was originally published on IHS Markit’s Energy Blog. Reproduced with permission.