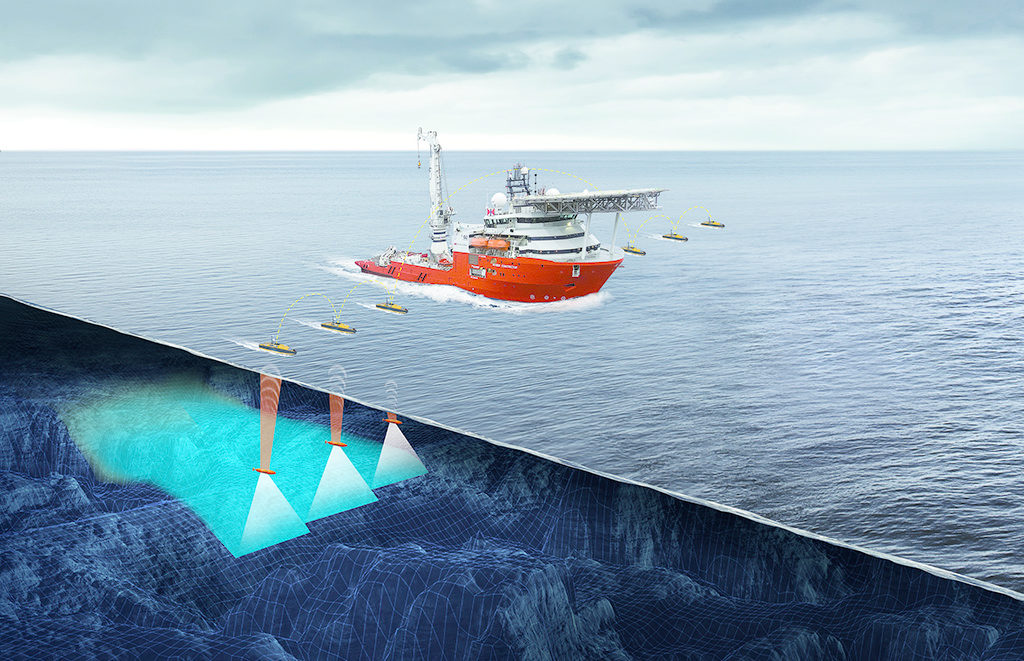 Deployment of a flotilla of AUVs to work on a project, and the communication among them, may someday lead to a subsea Internet of Things. Source: Ocean Infinity.

AUVs (autonomous underwater vehicles) are increasingly being used for pipeline surveys and other offshore applications. But they hold potential for wider use, which is dependent on operators pushing for advances. “We’ve been at this thing for 20 years; a large number of the technology elements have been there for 15 years. It’s just that the offshore industry has not consistently pursued them.”

Speaking at a technical session on the opening day of the Offshore Technology Conference, Andy Hill, Global Geohazards Technical Authority at BP, added that most technical papers continue to “look at what we know we can do” instead of taking a view of the future with the already-existing capabilities.

For example, Hill said that a “swarm” of AUVs can work in parallel, communicating results to each other. Ocean Infinity has developed a multiple autonomous vehicle program to conduct wide-area high-resolution surveys, resulting in a force multiplier of up to 6 times above traditional methods. Made up of six AUVs and six unmanned surface vehicles, the flotilla can be deployed from a single host support vessel. He added that integrated AUV activity via radio, acoustic, and optical signals may lead to the subsea Internet of Things.

Autonomous seabed seismic nodes (“flying” nodes) for deployment by the hundred are being developed by Autonomous Robotics Ltd. Hill called it a “step-change in deployment and recovery modes.”

Not Just for Inspections Anymore

The first AUV was developed in 1957 at the University of Washington. In the 1970s, the Massachusetts Institute of Technology advanced the development. L.C. Ricketts, DOF Subsea, said the first mention of AUVs in the oil and gas media occurred in 1990. As exploration extended into deeper water, interest grew because of the concerns about the tethers required for remotely operated vehicles (ROVs). Achieving parallel development of health, safety, and environment-acceptable launch and deployment was an early obstacle.

In his presentation of OTC paper 27920, Ricketts said that using cost/km in the tendering process for AUVs was the best—and worst—strategy. It forced AUVs into the oil and gas industry as a result of the fierce focus among AUV service providers to drive down their own operational costs and become a “cheap” alternative. However, it was also the worst because it fostered a cost-based instead of value-based mindset, which continues today.

AUV technology has developed to such a degree that since October 2012, DOF Subsea reliability figures of more than 320 dives yielding over 25000 km of pipeline survey showed less than 4% downtime on eight different vessels for six different clients, according to Ricketts, adding “these figures are not isolated. Other AUV service providers can claim similar successes.”

Ricketts said that companies that own the larger survey class AUV submarines are often also heavily invested in ROV assets, which may contribute to AUVs being perceived as “struggling for their own identity.”

Mobilization of an AUV typically takes about 2 to 3 days, and demobilization takes approximately 36 hours. Surveys can be conducted at 4 knots and faster and do not require the host vessel to be in dynamic positioning mode, trimming time and fuel costs.

On a single AUV you are now able to get side scan sonar, chirp seismics, multibeam sonar, backscatter, leak detection, high-resolution color photography, and laser scanning—all tied to specific GPS/time coordinates. These bigger capabilities equal bigger data. Because of the higher-resolution data collected by AUVs and the associated big file sizes, considerations for data management and storage are necessary to prevent this potential bottleneck.

An AUV surveyed 176 individual flowlines and pipelines over 13 deepwater fields, totaling more than 978 km of pipelines in water depths up to 1400 m. Each pipeline was imaged by multiple survey lines and the independent datasets were matched in post-processing to within centimeters.

To mitigate the large size of the data, customized data processing and workflows were developed in collaboration with the users, from the surveyor to the end-client, to tailor the deliverables to the needs of the project stakeholders, including: managers, GIS professionals, surveyors, pipeline engineers, etc.

Fischer said a GIS tool was incorporated for data review. “All data was georeferenced, which provides a database which could be used for a ‘time lapse’ approach to detect any seabed geohazard and subsea equipment change or modification over the life of the field.”

The OTC papers cited in the article will become available in the OnePetro electronic library at the conclusion of the conference.

Did you know? SPE Now Has a New Technical Section for Unmanned Systems