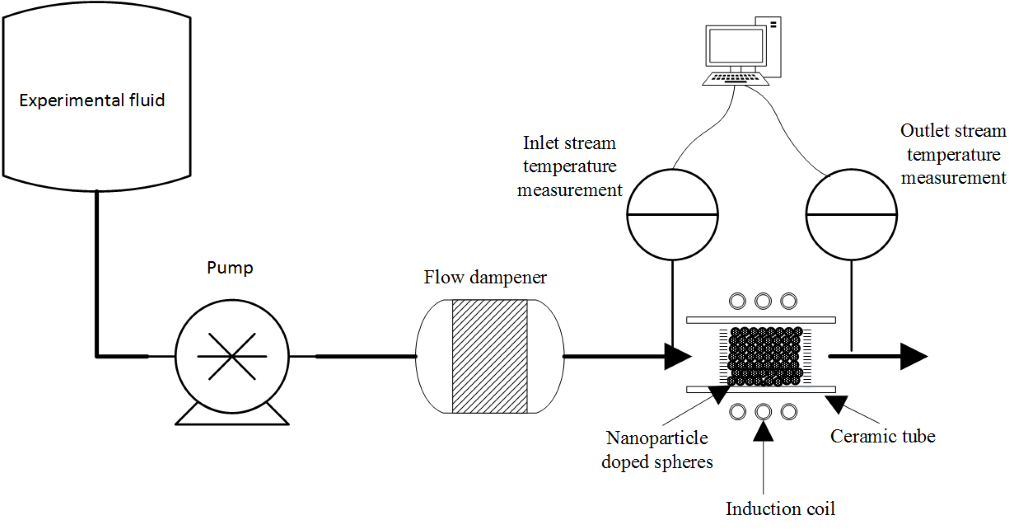 Simplified diagram of the experimental setup.

In this work, the authors demonstrate at a laboratory scale the possibility of using a radio-frequency heating system as a heat exchanger. The system consists of a pipe packed with nanoparticle-doped, superparamagnetic spheres as the bed material. This setup is able to heat in an efficient and temperature-accurate manner for a wide range of flow conditions, and can be potentially used as a highly efficient heat exchanger for production operations in areas where the construction of surface facilities is not possible.

A porous bed, made of solid spheres doped with superparamagnetic material and inductively heated, was evaluated for its ability to increase the internal energy of flowing fluids. The power dissipation through this type of porous system is nominally constant axially and variable radially. In this configuration, the heat-transfer surface area per unit volume for a single packed tube increases inversely to the diameter of a single doped sphere, whereas in a conventional shell-tube heat exchanger the surface area of a single tube increases linearly.

A numerical method was used to simulate the heat transfer within the packed bed. The numerical method accounts for the step change in the solid phase (packed-bed) heat generation caused by the induction heating. The method approach is based on the well-known volume average theory (VAT); scalar and transport properties for porous-media-transfer processes can be computed. Considerable effort was made in order to include, within the differential equations, transport variables such as internal heat transfer coefficient and friction factor, as well as topological variables such as specific surface area and packed-bed porosity. For the purpose of this study, the advantage of this method is that it allows for the calculation of the heat transfer coefficient by the use of two measured variables, the inlet and outlet temperatures of the fluid.

The authors focused on the induction phenomenon described by the Neel-Brown model, where the characteristic time of relaxation of the direction of the magnetic moment is dependent on temperature. This phenomenon occurs typically in nanoparticles made of ferromagnetic materials. Neel relaxation is present in the range of 100 kHz–10 MHz, sometimes observed at medium-range frequencies below 100 kHz and at a maximum of 1 GHz. The advantage of using nanoparticles with superparamagnetic properties over other kinds of magnetic inductive materials is the improved power dissipation capacity per surface area.

The VAT numerical method hereby used assumes that the flow is in steady state, fully developed and one-dimensional; thermal and hydrodynamic incompressible flow is also implied. The porosity of the medium is assumed to be constant throughout the bed. Wall effects are considered in the model although they are not significant for D/d greater than 10, with D corresponding to the tube inner diameter and d to a single solid sphere nominal diameter. The specific surface area is calculated with the aforementioned porosity of the packed-bed and the doped-sphere diameter. Equations relating to the numerical method are provided in the complete paper.

Description and Application of Equipment and Processes

Two different fluids were used to characterize the heating system: tap water and a 9 ºAPI heavy crude oil with a viscosity of 36,200 cp at 30ºC. Use of these dissimilar fluids allowed for a wide range of flow conditions.

The total volume of fluid that would transit through the packed bed was allowed to reach isothermal conditions in a separate vessel before each experimental run. The fluid-flow rate was controlled through a peristaltic pump. A flow damper was placed in the discharge of the pump to reduce the effect of pump pulsations on the flow, as shown in the figure at at the top of the article. Temperature and pressure were measured at the entrance and exit sections of the ceramic tube.

Once the flow was stationary, the induction heating was initiated at the desired amperage input. Both transient and steady-state temperature and pressure signals were processed with a signal transducer. Acquisition of an experimental data point concluded when temperature fluctuations of less than ± 0.5°C/min were recorded.

The experimental work focused on obtaining relevant data for the characterization of the basic heat-transfer information in the packed bed of spheres doped with superparamagnetic nanoparticles. First, the system response was characterized in terms of the nondimensional characteristic time and the experimental-fluid-phase dimensionless temperature response. The response of the system is plotted for various particle Reynolds numbers, where the porosity of the packed bed is considered to stay constant throughout the bed. The particle-to-tube ratio was equal to 12.

The heating efficiency as a function of D/d is plotted in Fig. 3 of the complete paper. Some data points seem to achieve values greater than unity, which is attributed to the propagation of experimental errors, mainly flow-rate-measurement errors that have a high impact on the resulting calculated values. The uncertainty in the measurement of efficiency is ±8 %, which implies that at the least, the system reaches efficiency values of approximately 80%. The near-wall effects were found to be less than the experimental uncertainty of 8%.

The type of packed bed studied in this work is of the solid nonmoving type, and, therefore, one may also obtain heat-transfer data from the energy generation per unit mass of the bed. The relevance of such variables is that one may eliminate topological values such as particle diameter and the geometrical ratio D/d.

Another useful scaling calculation is the response of the packed bed to changes in electrical current and frequency of the induction system. The frequency of the oscillating magnetic field has a direct effect on the penetration of the field into the electrically conductive material. For instance, the general rule is that high frequencies correspond to small penetration through the material.

In this work, the nominal doped sphere diameter has an effect on the behavior of the system; as D/d decreases, heat generation per unit mass (HGPM) increases. The resulting values for a simple linear regression show that for this system, the HGPM intercept is near 300 W kg-1, not zero, as expected. However, the uncertainty valuation yields an error of 230 W kg-1.

The numerical solution used the measured temperatures as input variables and the computed effective thermal-conductivity values were within 20 to 30 Wm-1K-1 for these conditions.

The experimental data, combined with the numerical simulation, are potential tools for proper scaling of a system of packed-bed doped spheres and the prediction of heat-transfer performance for industrial application. The method also provides information on time scales for achieving steady state within the apparatus.

The simulated temperature gradient has yet to be experimentally validated. Once this is achieved, the method would allow for the estimation of the physical behavior within the packed bed of the induction system. This is useful as a means of perfecting industrial equipment.

The experimental work shows that a packed bed of spheres doped with superparamagnetic nanoparticles is a suitable candidate for a heat-transfer apparatus with many potential applications. Moreover, considering the dimensionless time scales, both experimental and simulated, it can be inferred that the nanoparticle-doped spheres, packed in a bed, allow for an accurate control of the process temperature.