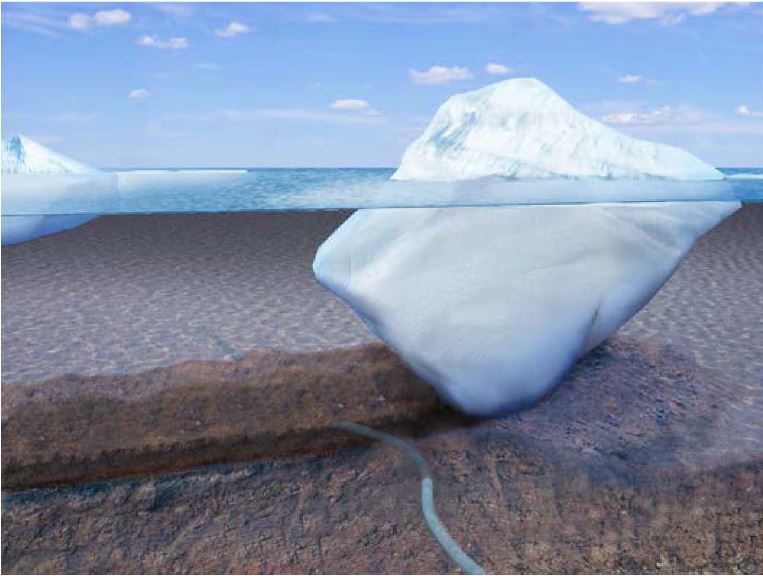 Ice keel gouging over a pipeline.

Strudel scouring can occur in early spring if an onshore river flow encounters an area with nearshore bottom-fast ice during the spring breakup; the river water will overflow, spread offshore, and drain through tidal and thermal cracks or seal breathing holes in the ice sheet. If the drainage rate is high, the high-velocity current of the draining water at the seafloor can hydrodynamically scour the seabed, which can potentially impose high current loads on a pipeline. The presence of a warm pipeline could also affect the possibility of strudel scouring.

Permafrost thaw settlement can occur when soil conditions below a pipeline trench contain ice-bonded permafrost. This typically occurs in shallow waters or near the shore crossing. When it occurs, the pipeline may lose its vertical support, and may be supporting the soil overburden above, causing additional loading on the pipeline. If an area of high thaw settlement is adjacent to an area of low or no thaw settlement, an unsupported pipeline span may develop. The differential settlement can induce strain in the pipe and should be accounted for in the design.

Ice gouging is the most unpredictable event and can have the largest loading condition. The impact and grounding of an ice keel upon the seabed produces pockmark indentations upon the seafloor. If the grounded ice possesses enough momentum to facilitate further movement, the ice keel may scrape along the seabed and create a furrow on the seafloor, which is known as an ice gouge or ice scour. As an ice keel passes over any point in the seabed, vertical and lateral stresses are applied to the soil at the keel base, resulting in a distribution of soil displacements with depth beneath the ice keel. The movement of the soil can also load and move a trenched pipeline by imposing high shear and bending loads on the buried line, even if it is below the maximum ice keel gouge depth.

Data on historical ice gouges and strudel scours are evaluated (often probabilistically) to predict design extreme ice-gouge parameters such as recurrence rate (frequency of occurrence), depth, width, and orientation with respect to the pipeline route. Extreme-event prediction methods are therefore important to the overall pipeline engineering.

Limit States Design. These methods can be classified as one of two approaches: reliability-based design (with use of probabilistic methods), or deterministic load and resistance factor design (LRFD).

Allowable-Strain Methods of Evaluation. Strain-based design can be classified as LRFD for a subset of limit states which is only applicable to pipeline response resulting from displacement-controlled events, such as soil loading on a buried pipeline, and is often combined with other design criteria to adequately capture all pipeline loading conditions.

Seabed-Characterization Surveys. Geophysical surveys of the seabed are conducted and high-resolution bathymetry data are taken to measure the depths and widths of seabed features. Side-scan sonar records have been used to help identify the individual gouges and scours and to measure dimensions and orientation, with more detailed measurements obtained with multibeam sonar. Gouges in the seabed are altered by ice-gouge and strudel-scour recurrence, sedimentation, and bedload transport by bottom currents. Shallow areas with sandy sediments exposed to vigorous waves and currents during the open-water season may have all bathymetric traces of ice gouging or strudel scouring destroyed or reworked by the end of each summer season.

Geotechnical-Data Collection. Geotechnical information (field and laboratory) needs to be collected and analyzed to determine soil properties and to evaluate potential thaw settlement. Most of the environmental loadings result in some form of pipeline/soil interaction in a displacement-controlled condition; the same soil that applies loads on the pipeline also limits the amount of displacement. Thermal modeling will be required in addition to the results of geotechnical laboratory testing to assess the effects of thaw settlement along the pipeline route if permafrost exists. The results of geotechnical testing/analysis along with pipeline-design analyses can be used to determine or confirm trenching and backfilling requirements.

Conventional methods of pipeline burial use equipment such as ploughs, mechanical trenchers, and jetters. The majority of these methods have been designed to accomplish a maximum of 2 to 3 m of pipeline burial. Dredges can be used but have water-depth limitations and limited productivity. Land-based

equipment has been used for shore crossings, but is limited to shallow depths where temporary construction berms can be used as a working platform.

Pipeline-trenching equipment and the associated project-execution plan must be compatible with offshore conditions. The equipment must be able to operate in summer or winter environments (depending on the execution plan) and be able to create a suitable trench profile in the site-specific soil conditions. A viable option in deeper water may not be the best solution in nearshore areas.

The presence of seabed permafrost or large ice features may require overexcavation, which will in turn require additional reach capability of the trenching equipment, much of which is generally not designed specifically for use in arctic conditions. Several trenching techniques could be used, and some are variations on conventional (summer) methods. Conventional backhoe excavation is a proven, but time-consuming, method. Ice-based excavation has been performed on several pipeline projects with hydraulic backhoes working from stable land-fast sea ice. The sea ice is artificially thickened to support the trenching and pipe-laying activities. This construction method permits a continuous trenching, pipe-laying, and backfilling program.

The Northstar pipeline was the world’s first subsea arctic oil pipeline and was successfully installed in April 2000. Twin 10-in. oil and gas pipeline systems run approximately 10 km from Seal Island, through a lagoon area, to a shore crossing, and then overland for approximately 18 km. The evaluation of and design for unique environmental loading conditions including ice gouging, offshore permafrost, upheaval buckling, and strudel scour were a major consideration along with trenching and backfilling of the pipeline design.

Arctic pipeline design tools have continued to evolve since Northstar’s implementation. For example, the design for ice gouging for Northstar involved burying the pipeline sufficiently below the ice keel depth, so that bending strains resulting from subgouge displacements were below tolerable limits. Subgouge soil deformations were estimated from field measurements of ice gouge depths and widths by use of empirical relationships developed through small-scale geotechnical centrifuge models.

The effect of this soil displacement and the loading on the pipeline was evaluated through nonlinear finite element analysis. The bending was applied in a displacement-controlled manner by imposing the soil displacement field at the pipeline depth to the soil spring nodes. In turn, the springs pull (or push) the pipeline elements and the resulting pipeline strains were calculated and compared with allowables. Similar analyses were carried out to assess the effects of strudel scour and thaw settlement on the pipelines. The objective of the upheaval-buckling analysis for the Northstar pipeline was to determine the minimum backfill thickness that must be placed over the pipelines for the selected design parameters and maximum allowable vertical variance of the pipeline profile.

Technological advancement is needed to balance between what is currently available and what is needed to effectively and economically design and install pipelines, flowlines, and umbilicals in arctic regions. One of the key paths forward is to advance and improve numerical modeling procedures to address large-deformation pipeline/soil-interaction events, thereby narrowing the margins of engineering-model uncertainty, reducing target burial depth requirements, and lowering cost and establishing improved risk estimates.

This article, written by JPT Technology Editor Chris Carpenter, contains highlights of paper OTC 27374, “The Evolution of Design Tools for Arctic Subsea Pipelines,” by Mike Paulin and Jonathan Caines, Intecsea, prepared for the 2016 Arctic Technology Conference, St. John’s Newfoundland and Labrador, Canada, 24–26 October. The paper has not been peer-reviewed.