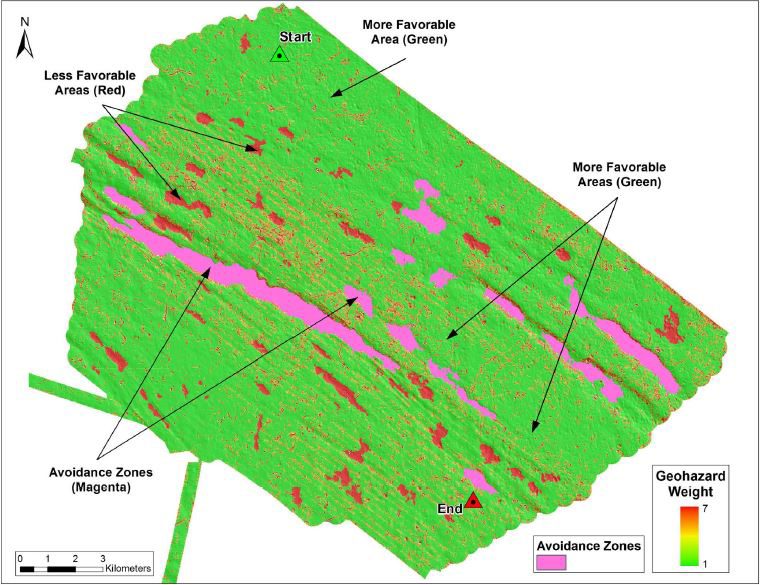 Arctic environments have unique geologic complexities. It is important to identify and avoid or mitigate significant geological hazards such as ice gouges, strudel scours (circular depressions), or permafrost upheaval zones for subsea pipeline routes in arctic environments. The authors demonstrate a work flow to identify and map multiple geohazards, incorporate pipeline-related criteria, classify and weight features on the basis of their inferred risk to a subsea pipeline, develop a composite map of hazards, and perform geographic-information-system (GIS)-based, least-cost pipeline-routing techniques to produce optimal pipeline route options.

This paper describes a work flow for quickly and semiautomatically mapping geohazards in an arctic setting along with geohazard assessment and pipeline route determination. The authors emphasize the importance of route selection in the early stages of project development to guide subsequent data collection and assessments for detailed site analyses. Often, pipeline routes are predetermined on the basis of regional, low-resolution geophysical data or the location of existing infrastructure or developments. By the time detailed assessments are completed, significant geohazards that were not initially recognized may be identified along the proposed route, and costly changes may be required to revise the route and avoid these geohazards.

The optimized pipeline-route work flow involves several phases. The project area bathymetry data can initially be converted geometrically to create maps related to slope, roughness, or filled bathymetry (that identifies sinks or depressions in the surface) for an overview of the geomorphology of the seabed. Once geohazards are identified, they can be mapped by reclassifying the geometric maps to isolate the specific features. Features from these maps can then be reviewed and revised as needed so that the reclassification actually represents the intended feature. Noise or other unrelated features can be removed. Pipeline-related criteria can be incorporated and the features can be classified and weighted on the basis of their inferred risk to the pipeline. The weighted features can be combined into one weighted composite map which can be used to perform GIS-based, least-cost path pipeline routing techniques to produce optimal pipeline route options. Although the term “cost” is associated with the routing technique, it does not refer to an actual financial value of the routing; instead, it reflects the input value of the composite map which, in this case, incorporates the relative hazard-weighting value.

The data used for this example comprise a 5-m binned multibeam echosounder bathymetry grid that covers an area approximately 330 km2. Start and endpoints for a hypothetical flowline were selected within the surveyed area. When available, all data should be incorporated into the routing assessment. However, the assumption is made that no other data—such as additional geophysical surveys; ice analyses; and geotechnical, geological, or metocean investigations—exist for this example area and that the project is in early stages of development.

Although many geohazards such as slope failures, fluid-expulsion, and faulting may be present in arctic environments, for this assessment we focus on hazards unique to the arctic, mainly those hazards associated with sea ice and permafrost. These hazards can be divided into two categories: first, dynamic or active processes such as a drifting iceberg or strudel scouring, or, second, static features that define the topography of the seabed and, although they may have resulted from dynamic processes, are currently not dynamic. Static seabed features resulting from sea ice may consist of strudel scours, ice gouges, and associated berms (or dropstones). Additional static features can result from permafrost in offshore environments. These features result in a topography that is rough and irregular and can pose issues for the development of a pipeline route. It is important to identify and assess the difference between dynamic and static hazards in arctic areas in order to properly assess the risk posed by those hazards.

Specific criteria related to the pipeline or project area can also be considered. Constraints can be cultural, such as existing infrastructure or fishing grounds; project-specific, such as avoidance distances surrounding certain features, orientations of the pipeline, and approaching angles to connections; or government-regulated, such as restricted zones or requested areas of avoidance relating to ecologically sensitive areas. Multiple constraints can be incorporated into the route selection; for this assessment, two basic constraints related to project-specific criteria have been selected: Avoid slopes greater than 7°, and avoid depressions greater than 5 m deep.

Automated mapping of geohazards allows for quick assessment of seabed conditions compared with labor-intensive and time-consuming manual mapping of features. In GIS-based computer programs, automated mapping techniques are easy to set up and can work fast and efficiently to map many features with similar geometric shapes and sizes over a large area. However, when applying this type of mapping, manual verification is required to confirm features were mapped correctly. The complete paper describes some advantages and disadvantages of automated vs. manual mapping.

The following describes some of the automated techniques used to isolate and map geohazard features, including slope, roughness, and the fill method from ArcGIS.

Roughness. There are several ways to assess seabed roughness. The standard deviation of the residual topography works well to identify and isolate variability observed on the seafloor. The rugged seafloor can be attributed to a combination of geohazards such as scours, gouges, or boulders in the same area. Reclassification of roughness on the basis of a natural-breaks classification uses color shading to identify rough and smooth areas.

Fill Method. Some GIS and hydrologic modeling programs include a fill function that identifies and removes (fills) sinks in the bathymetry surface. This method is very useful in detecting depressions or, if the bathymetry is inverted (multiplied by -1), mounds (e.g., boulders, ridges, and berms). By applying the fill function to the bathymetric surface and then subtracting the filled surface from the original bathymetry, one is left with outlines of depression features. Simply converting the outlines to polygon features allows for mapping of numerous features in only a few steps. By assessing their size and shape, features such as strudel scours (round, consistent size) or large depressions (long, linear) can be identified and mapped separately.

Weighting of geohazards provides a quantitative approach to assess the relative hazard level and potential risk of the hazard. Weighting can be a precursor to a more-robust risk assessment generally conducted further along in a project. The allocation of weights to geohazards can be subjective; however, the weighting is generally based on project details, inferred risk, and criteria related to the pipeline. For example, the hazard level associated with the consequence of a pipeline free-span caused by an irregular seafloor will be different from the hazard level associated with the consequence of displacing and rupturing a pipeline because of an iceberg. The values used are arbitrary, and for this example, the authors use a range from 1 to 10, with 1 considered a low hazard and 10 considered a high hazard.

Geohazards are classified and weighted, and individual maps are added together and normalized to the number of input maps to produce a compiled geohazard composite map.

The composite map has been assigned a color scheme, with areas that are least favorable in red and most favorable in green. Areas that should be completely avoided for any type of development are shown in magenta. Because areas in green are most favorable, they will likely present few difficulties and require a standard level of further investigation to support detailed design. Yellow to orange on the map indicate zones in which moderate difficulties may be anticipated that can, depending on the nature of the planned activities, require specialized or advanced investigations and designs. Red indicates areas in which substantial difficulties may be anticipated and which will likely require advanced or extensive site characterization and design.

Previous work by the authors and others show the advantages of pipeline routing by use of GIS-based, least-cost path optimization. The premise of this approach is that the routing can be performed with the weighted geohazard composite map and a start and endpoint for the pipeline. The algorithms in ArcGIS help to define the direction along the least accumulation path from start to end and the least accumulative cost distance from each cell to the nearest source point. This produces the shortest distance, least-cost route for the pipeline. A corridor along this route can now be assessed for followup surveys and assessments.