Who's Minding the Methane? Federal Emissions Rules in Flux, States and Industry Take the Reins

The volley of starts-and-stops aimed at the regulation of methane emissions from oil and gas wells continues. Although a federal appeals court temporarily thwarted the US Environmental Protection Agency’s (EPA) suspension of the regulations in early July, several states have formed an alliance to keep the ball rolling for the regulations. EPA’s most recent data show the industry has made significant strides in decreasing these emissions even with increased production. Gas well completions and workovers from hydraulic fracturing decreased methane emissions from venting and flaring by nearly 50% from 2014 to 2015.

Here’s a quick overview of what happened when, and where we are today.

A federal appeals court ruled on 3 July that the EPA cannot suspend the rule to restrict methane emissions from new oil and gas wells. This followed the EPA administrator Scott Pruitt’s issuance in May of a 90-day stay of the rule limiting fugitive methane emissions at drilling sites and setting standards for equipment and employee certification. He then extended the moratorium to 2 years on enforcement of parts of the 2016 New Source Performance Standards (NSPS) for the Oil and Gas Industry and asserted his action was not subject to court review.

However, the US Court of Appeals for the District of Columbia Circuit disagreed and said that under the Clean Air Act, EPA did not have the authority to block the rule. The court contended that by delaying the effective date, “such orders are tantamount to amending or revoking a rule.”

This means the EPA will have to revisit new rulemaking to change the 2016 NSPS.

The court also rejected EPA’s argument for canceling a requirement for oil and gas companies to report methane emissions, which was instituted in November 2016. The requirement stemmed from an agreement between US President Obama and Canadian Prime Minister Justin Trudeau and called for producers to report on their emissions, equipment, and the feasibility of controls designed to limit methane release. In June, arguing that the industry had not had enough opportunity to comment, EPA announced that it was suspending enforcement of the rule.

On 7 July, EPA moved the court to recall its mandate in order to provide the agency with the standard period of time in which to evaluate its options before the court’s decision becomes effective. The court granted the EPA a 2-week reprieve from complying with the decision while the agency considers its options, including an appeal to the US Supreme Court.

In a 10 July interview with Reuters, Pruitt said, “That [methane case] was a case about our authority to stay certain rules. That’s distinct from withdrawing rules.” In a broader context of environmental rules, Pruitt said, … “we are going to see what our authority is—the tools in the toolbox.”

To date, EPA has not commented on its next steps.

Since President Trump’s announcement on 1 June to withdraw the US from the 2015 Paris climate accord, 13 states have formed the US Climate Alliance, with Colorado becoming the most recent participant on 11 July. Governor John Hickenlooper signed an executive order to reduce greenhouse gas (GHG) emissions by more than 26% from 2005 by 2025 and lower carbon emissions from the electricity sector by 25%. In addition to Colorado, the other states are: California, Connecticut, Delaware, Hawaii, Massachusetts, Minnesota, New York, Oregon, Rhode Island, Vermont, Virginia, and Washington. Puerto Rico is also a member of the alliance.

These states collectively represent a third of the country’s population and 36% of the US overall Gross Domestic Product (as of 2016), and in 2014 emitted 18% of carbon dioxide emissions, according to Washington’s Governor Jay Inslee.

Currently, state regulations vary widely. For example, Colorado has some of the most stringent laws for the oil and gas industry, while New Mexico has none. California instituted aggressive methane regulations in May, and New York and Pennsylvania crafted policies since federal rollbacks started.

The drive to establish stop-gap state regulations is affected by striking a balance between the regulation of the industry and the benefits of the industry to state government coffers and their residents. Oil, gas, and fossil fuels remain critical to the economies of states and the US overall.

A 2015 report by the Pacific Research Institute, The 50 State Index of Energy Regulation, took a look at states’ economic environments. Describing the report as apolitical, the co-authors wrote, “As economists, we have adopted a basic economic perspective, economic efficiency, defined as allocating resources to their most productive uses.” They assessed whether a state is a “source of energy resources oil, gas, or coal, and if it is an economically efficient state for consumption or operating energy-related businesses.” 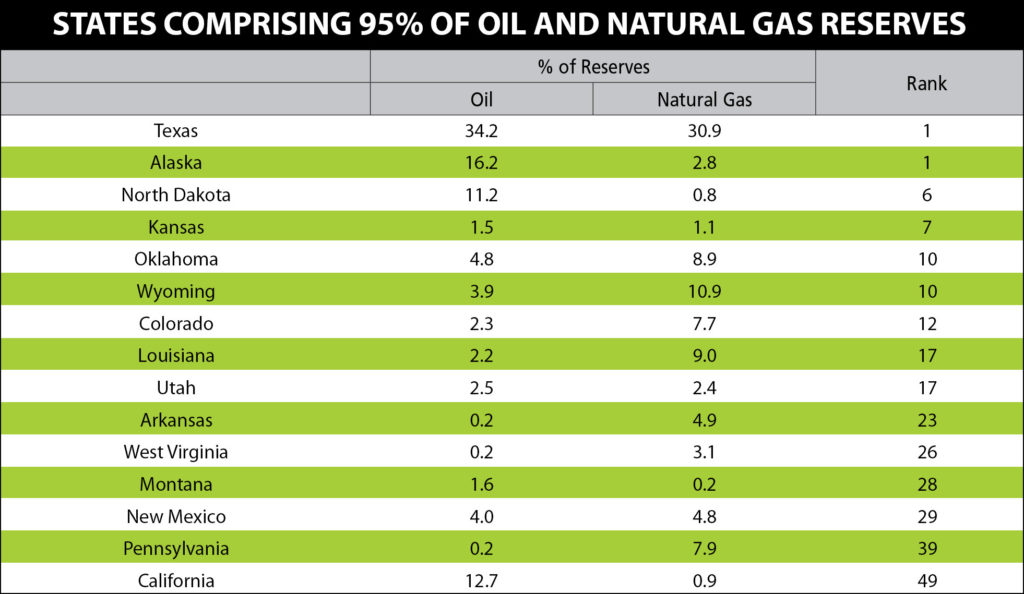 The authors noted there appears to be little relationship between whether a state is a source of resources and its rank as an economically efficient state. They wrote, “While the two states with the largest reserves (Texas and Alaska) are ranked at the very top of the Index, the state with the third-largest reserves (California) is ranked at the very bottom. Given the regulatory variation across states, a picture emerges of where in the country the regulatory environment for energy consumption, production, and distribution is relatively more economically efficient.”

The American Petroleum Institute’s (API) Senior Director for Regulatory and Scientific Affairs Howard Feldman presented testimony on 10 July to an EPA hearing on the extension of compliance deadlines to allow the agency to revisit the 2016 NSPS regulations. He said, “Methane emissions from the natural gas industry have fallen 18.6% even as production increased by 50% between 1990 and 2015,” adding that the industry is incentivized “to capture more of what we sell,” referring to methane emissions. Methane is the main component of natural gas.

Feldman said that methane emissions from hydraulically fractured natural gas wells have fallen nearly 79% since 2005. He noted that the 2012 NSPS rules to reduce volatile organic compound (VOC) emissions from oil and gas operations and methane emissions as a co-benefit were developed in collaboration with industry and are effective. The goal of the 2012 rules is to reduce methane emissions from the oil and gas sector by 40% to 45% percent by 2025 from 2012 levels. The 2016 NSPS “failed to account for all of the costs associated with the final rule requirements and did not provide significant environmental benefit beyond a rule focused on VOC losses,” he said.

Feldman pointed to the economic benefits and energy security provided by the industry and said API will work with federal agencies and Congress toward a “smarter regulatory approach based on science-based solutions.”

EPA data show that natural gas and petroleum systems contributed 31% of US methane emissions from 1990 to 2015, and that the methane leakage rate from natural gas systems is just 1.5%. Petroleum system methane emissions have decreased significantly—nearly 29% since 1990, 13.5% since 2005, and 17% since 2011. EPA reported that a large portion of the reductions occurred between 2014 and 2015, related in large part to “decreases in emissions from associated gas venting and flaring.”

Where’s It Coming From? 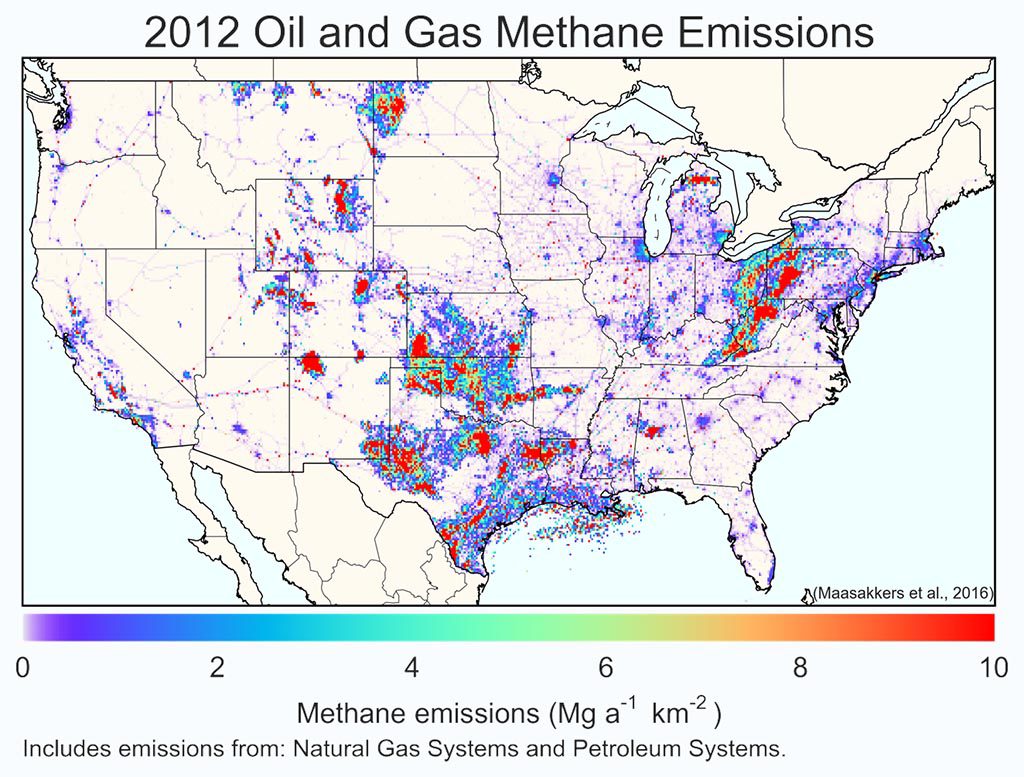 The “hot spots” are in the regions known for high production levels in 2012: the Permian, Bakken, Marcellus, Eagle Ford, and other Oklahoma-Texas plays.

When comparing the Harvard/EPA map with data compiled by the Independent Petroleum Association of America (IPAA), the same regions can be seen to have reduced methane emissions from oil and gas activities from 2011 to 2013. The top performer is the Appalachian Basin, which includes the Utica play, with a drop of 55%. The runner-up is the Anadarko Basin at 33%. [Note: The 2012 NSPS went into effect on 13 November 2012.] 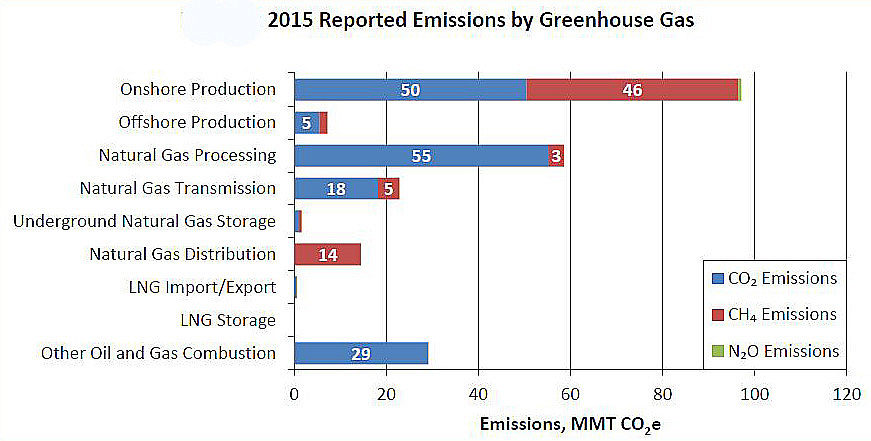 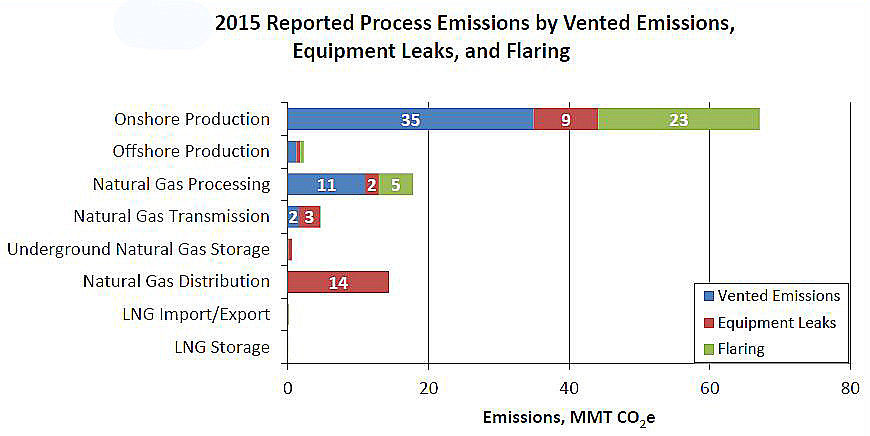 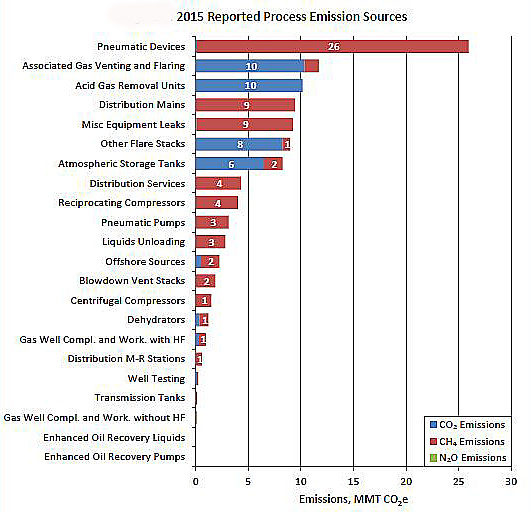 The comparison of the number of pneumatic devices correlates with the “hot spots” for methane emissions shown in the Harvard/EPA map. An exception is the Williston Basin (Bakken) in North Dakota. Although there are fewer pneumatic devices, the region is among the top in reported total emissions of GHGs. Since 2012, North Dakota has had the highest volumes of flared natural gas, largely because of a lack of infrastructure for transport. As infrastructure has been built, more of the natural gas production has been brought to market, reducing the volume of flared natural gas despite much higher production.

The North Dakota Industrial Commission established targets in September 2015 to reduce natural gas flaring. In March 2016, 10% of North Dakota's total natural gas production was flared, less than one-third of the January 2014 flaring rate, which was at 36%, according to the US Energy Information Administration.

EPA acknowledges that the measurement of the reported emissions is not an exact science. Facilities may measure or estimate the flowback rate in order to report emissions using an engineering calculation; others may use direct measurements. Fluctuating production volumes may also affect the emissions amounts. Change of ownership may mean the reporting facilities changed from year to year. Variables such as these preclude the data from being broadly applied across all processes, equipment, and facilities.

While not providing actual real-time measurements in most cases, the data are helpful in identifying emitters and sources of emissions in equipment and processes. The fine-tuning of measurement and calculation methods is ongoing within the industry.

For example, a recent hypothesis contended that the methane emissions averages generated using aerial data are higher than surface observations because they are based on methane that was emitted during short-lived events that took place in the morning.