Shell’s Prelude FLNG arrived at its operating location off Western Australia on 25 July, where the next phase of the project, hookup and commissioning, will begin. Prelude is one of three projects under construction that, along with nine others recently brought on line, will deliver USD 10 billion in cash flow by 2018.

In his 2Q presentation on 27 July, Ben Van Beurden, CEO of Royal Dutch Shell, highlighted the start of deepwater production in Brazil with the company’s tenth FPSO (P-66) in the pre-salt Santos Basin, and the production recently started at the Schiehallion deepwater oil field in the North Atlantic Ocean.

He said the portfolio of large projects either delivered or about to deliver are expected to produce more than 1 million BOEPD to achieve the expected cash flow at a USD 60/bbl oil price. Most of the projects are now producing such as the Kashagan field in Kazakhstan, the Stones deepwater oil and gas project in the Gulf of Mexico, the 10 FPSOs in Brazil, and the Queensland Curtis liquefied natural gas plant in Australia.

“The projects still under construction are either at an advanced stage—like Prelude—or are replicating a successful model, as in Brazil,” Van Beurden said, adding, “I am confident that we are on track to deliver these projects and expect half of the 10 billion cash flow to contribute to our financial results this year.” 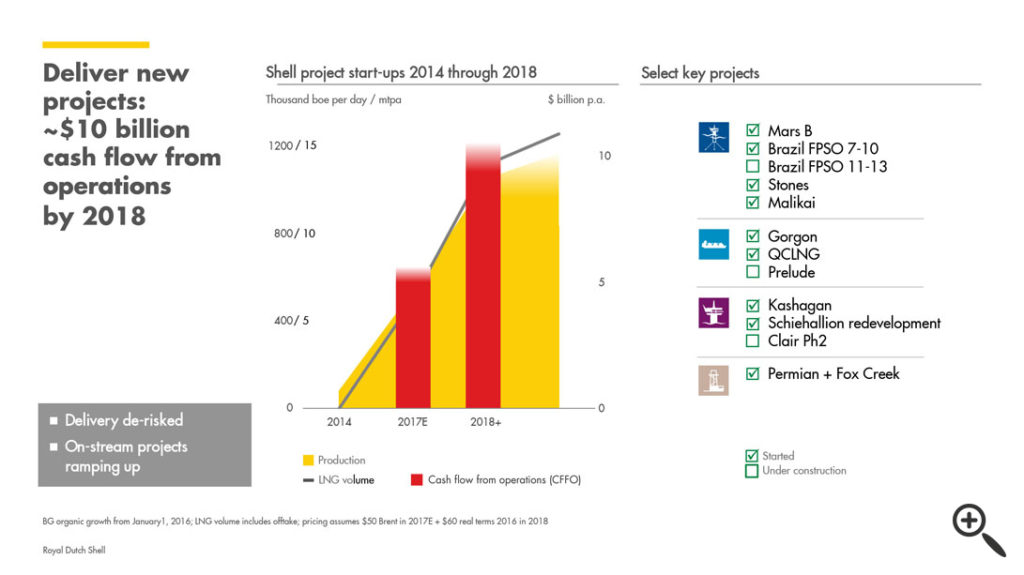 The company’s Q2 profit tripled to USD 3.6 billion from USD 1 billion in the same period last year. Its cash flow from operations reached its highest level since the oil price began sagging in 2014. Net debt fell for a third straight quarter to USD 66.4 billion from USD 72 billion at the end of Q1 as the company sold assets as part of its USD 30 billion divestment program. 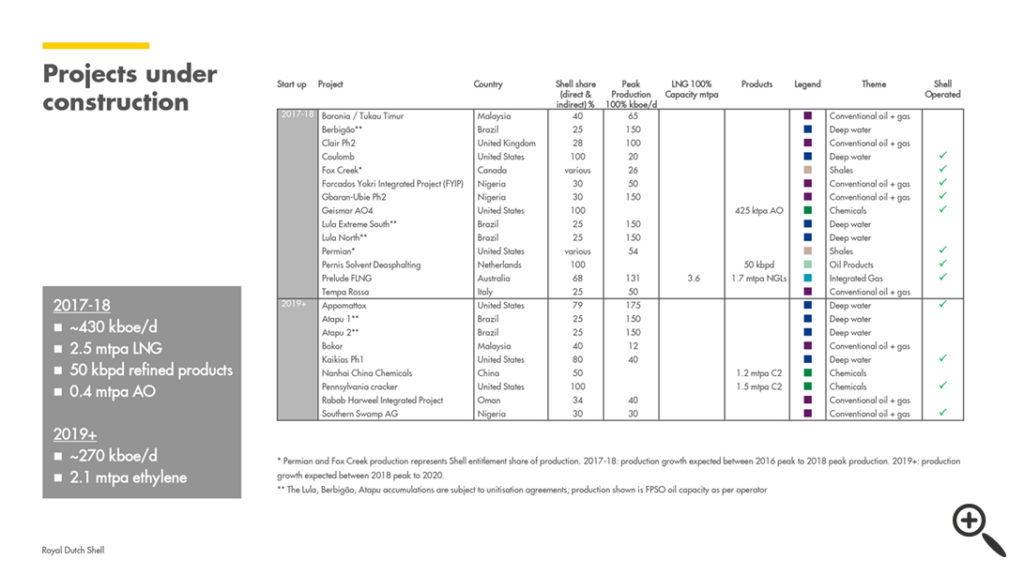 Van Beurden said, “With this quarter, we now have a very solid track record over a 12-month period with $38 billion of cash flow from operations at an average oil price of less than $50/bbl.”

Contributing to the improved numbers is the reduction of operating costs by more than 20%, or USD 11 billion, since 2014. An example given by Van Beurden was the retraining of the crew on the Curlew FPSO in the North Sea so more of the maintenance can be done by them. “This training has reduced our reliance on outside contractors by half since 2014 helping us reduce costs by 35% between 2014 and 2016, and increase the availability of our assets.”

In the Gulf of Mexico, the company has halved its unplanned downtime between 2015 and 2017 with improved surveillance of its equipment, and the Gumusut deepwater project in Malaysia has reached 98% availability.

To achieve its goal of operating with capital investment in the range of USD 25–30 billion every year until 2020, the company is focusing on changing the way it designs and executes projects.

The Appomattox deepwater project in the Gulf of Mexico has seen a savings of 20% compared to the original investment proposal by a reduction in the number of wells and renegotiation of contracts with suppliers. The cost for the redevelopment of the Gannet C field in the North Sea has also been reduced by 20%.

Van Beurden said, “To be clear, costs must continue to go down and stay down.”