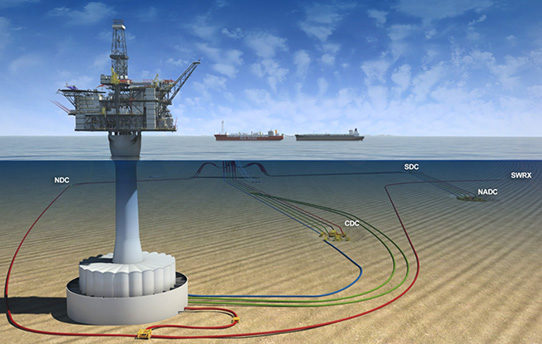 TechnipFMC has been awarded an engineering, procurement, construction and installation (EPCI) contract from Husky Energy for the West White Rose Project in Eastern Canada.

The contract covers the supply and installation of subsea equipment including tie-in manifolds, flexible flowlines, and control umbilicals, which will connect the West White Rose platform to the existing SeaRose floating, production, storage, and offloading (FPSO) vessel.

Husky announced its decision to go ahead with the $1.6-billion expansion project in May to access the resources west of the main White Rose field, which was originally developed using subsea wells in two subsea drill centers: the central and southern. A third drill center, the northern, is used as an injection site for gas that is being stored for future use. Production began from North Amethyst in May 2010, the first subsea tie-in in Canada, Husky said. North Amethyst is the first satellite field development at the White Rose project and was brought on production less than 4 years after discovery.

The West White Rose Project will use a fixed platform tied back to the SeaRose FPSO. Construction of the concrete gravity structure and associated drilling facilities, utilities, support services, and accommodations for personnel, is scheduled to begin in the fourth quarter of 2017. The first oil is expected in 2022 and the project could achieve a gross peak production rate of about 75,000 B/D by 2025, according to Husky. The main White Rose field is located approximately 350 km (217 miles) east of St. John’s, Newfoundland and Labrador, on the eastern edge of the Jeanne d’Arc Basin in water depths of about 120 m (393 ft).

Husky continues to assess a new discovery at Northwest White Rose, where a 100-m (gross) light oil column was delineated in the second quarter. The White Rose A-78 well was drilled approximately 11 km northwest of the SeaRose in the first quarter of 2017.