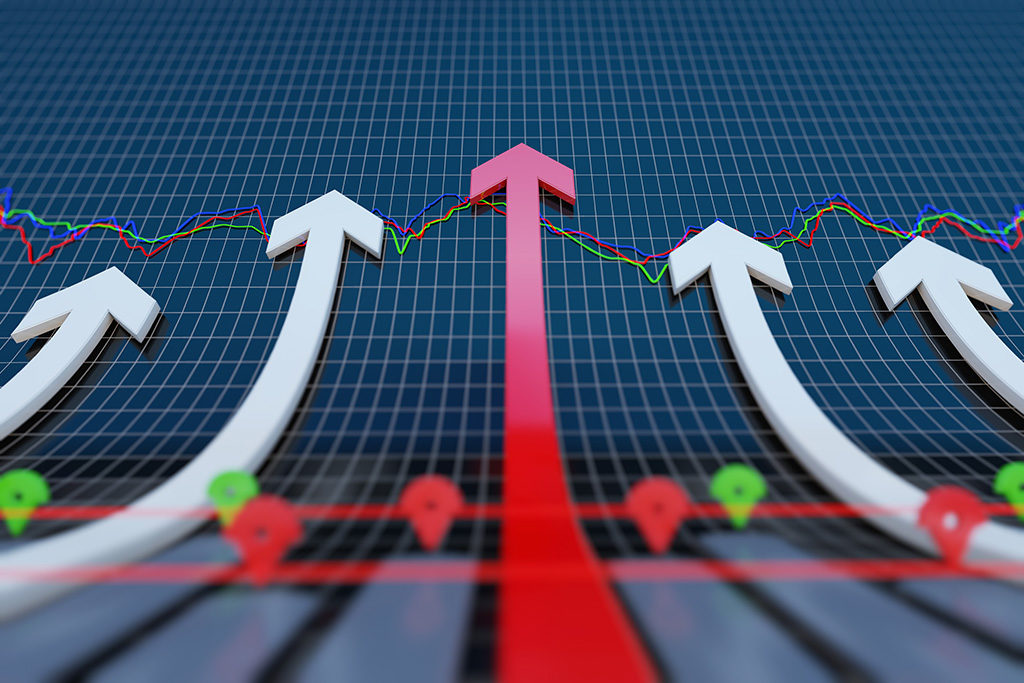 It may not feel like it, but the conventional upstream industry is well on the road to recovery. Many of the biggest players in the industry—particularly the majors—have adapted their portfolios for “lower for longer” and are once again sanctioning big projects. We are not back to the heady days of 2010–2014, but we have left behind the dark days of 2015–2016.

There are clear, positive signs that the more competitive conventional projects are moving down the cost curve sufficiently to attract new investment. At the beginning of 2017, Wood Mackenzie forecast that between 20 and 25 major upstream projects (commercial reserves exceeding 50 million BOE) would be sanctioned across the globe during the year. This is down from the 40 projects on average sanctioned annually from 2007 to 2013, but still a giant leap over the eight that progressed in 2015 and the 12 in 2016.

So, how are we faring, as we enter the final furlong of the year? Well, not too bad, to be honest. By mid-September, 18 major projects have reached a final investment decision (FID), so we remain firmly on track for our 20–25 prediction.

More importantly, though, what do these 18 projects tell us about how the industry has changed and how it is adapting for the future?

For a start, they send some very strong, clear messages.

Thirteen of the 18 are either brownfield expansions on existing fields, satellite developments, or subsea tiebacks (see map). Not only are these projects less risky than greenfield developments, they also tend to be less capital-intensive and are quicker to bring on-stream. This offers a quicker payback and better returns on development dollars—two crucial metrics given the competition for investment with US unconventionals. 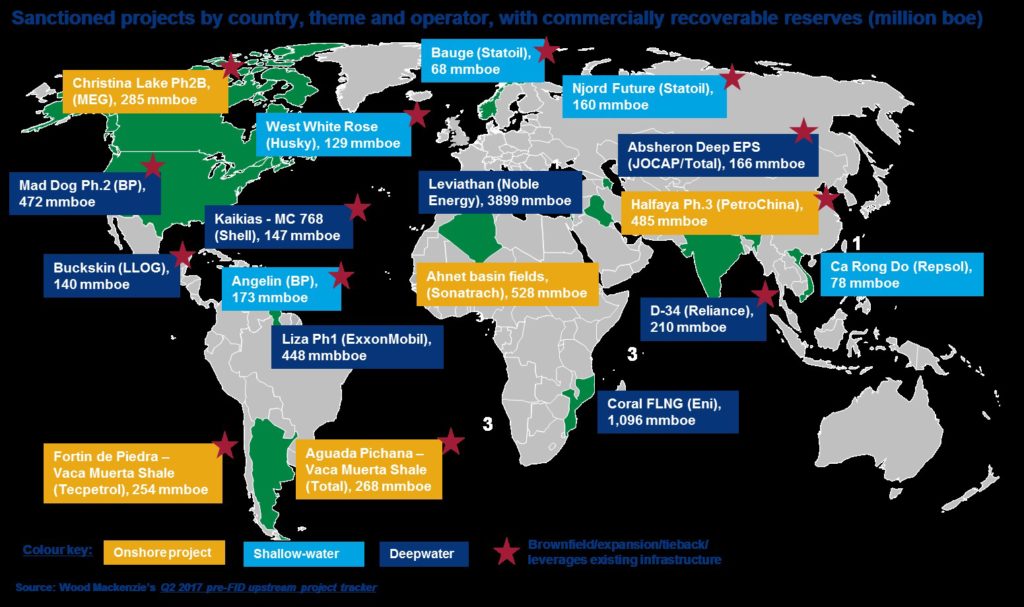 In regions such as the US Gulf of Mexico, we have seen investments in deepwater subsea projects compete head-to-head with US tight oil. They are able to because the cycle time to first oil—and thereby the recouping of capital—is drastically compressed by embracing subsea tieback solutions.

But there are also sacrifices to be made. The shift from greenfield standalone development to subsea tieback to nearby facility—as seen at the LLOG-operated Buckskin—reduces capital expenditure and breakevens, but also total recoverable hydrocarbons. We calculate the change in project design took Buckskin's project breakeven from above $90/bbl to below $50/bbl, but also reduced commercial reserves from 345 million BOE to 145 million BOE.

Project and cost optimization are key to new investment, and some of the byproducts of that are smaller-scale developments and reduced well counts, but also less delivery risk.

However, it is also important to note it is not just about short-cycle investments. ExxonMobil recently sanctioned the first phase of development on the 1.5 billion BOE Liza oil field offshore Guyana, proving that the best greenfield opportunities can also move forward to commercialization. It should also be noted that standalone developments of giant discoveries like Liza and Leviathan (Israeli gas) are being phased for early monetization and to minimize the compound risks in large project execution.

Which leads us onto our next clear trend: The majors are dominating new FID activity. Of the 38 mid-to-large projects sanctioned since the start of 2015, 20 are major-operated. This equals 14 billion BOE of the 21 billion BOE of commercial reserves sanctioned since the beginning of 2017. The majors not only recognize that cyclical costs are probably at or near the bottom, but also have the financial muscle to take advantage and push their best projects forward.

But it can also mean a lot of contracting power is concentrated in just a few hands. Nowhere is this truer than in the downsized and streamlined deepwater sector. For example, of the 40-odd pre-FID deepwater projects realistically targeting sanction over the next few years, more than 70% are operated by just eight companies—Brazil's Petrobras and the seven majors (ExxonMobil, Chevron, Shell, BP, Total, Eni, and Statoil). Fewer operators means less capital available and only the most cost-competitive projects advancing.

In contrast to the majors, national oil companies (NOCs) have tightened their purse strings and have been noticeably inactive on new project investments since the fall in oil prices. They operate less than 2 billion BOE of the 22 billion BOE of commercial reserves sanctioned since 2015. But we believe NOCs need to be on the lookout for investment opportunities as many face significant production declines post-2020.

Many smaller companies have also struggled to attract necessary financing to progress their projects given the uncertainty in future commodity pricing. Although this situation does not look like changing soon, it is interesting to note the few low-breakeven offshore fields that have been progressed in 2017 by small-cap players. This includes projects such as the Lancaster Early Production System in the UK North Sea (operated by Hurricane Energy), and the Ruche oil field offshore Gabon (operated by FPSO-operator BW), both of which are below the 50 mmboe threshold and hence do not make it onto the map above. Both employ innovative financing, leasing and service sector partnering, highlighting what is needed to get smaller projects sanctioned in the current environment.

Where Next From Here?

At the start of the year, Wood Mackenzie predicted an uptick in upstream investment year-on year, from around $390 billion in 2016 to $415 billion in 2017. So far we have been on track, although much of the increase has been driven by renewed activity in US tight oil. Conventional development activity in many major producing areas—China, Indonesia, Angola, and Nigeria, to name but a few—remains down.

Upstream costs also continue to track downward. With the service sector already running on skeletal margins, oil companies must now look inward for future efficiencies. And it is here we encounter one of the great debates in the industry: To what extent are the cost reductions currently available being imbedded in company work flows. Many remain skeptical that upstream operators have actually incorporated structural cost reductions as much as is often stated. There is a danger that companies rely too much on stripped-down projects and cyclical cost reductions (primarily rig rates) and do not do enough to imbed lean practices across all aspects of field development.

Standardization remains a holy grail for the sector, but so far we have only seen limited evidence that companies are embracing universal standards. The problem is that what is “good enough” still differs dramatically across both different countries and operators. We have seen "baby steps" toward incorporating international standards such as ISO, but industry mentalities remain weighted toward the traditional model of designing everything bespoke to be client-compliant. It is probably only in the subsea sector where we are seeing the greatest progress in challenging this mindset.

Big Developments on the Horizon

We can already look forward to 2018 and what it may hold for the conventional sector. It is lining up to be a defining year, as so many large projects have targeted 2018 for sanction. From a volumes and investment perspective, 2017 to date represents solid progress on 2016, and it’s possible we could see the same again for 2018.

There are some mammoth projects in the hopper and if just a few come through, it will provide a much-needed lift for the service sector. Big developments targeting a 2018 FID include Libra in deepwater Brazil, Anadarko's Golfinho/Mozambique LNG project, Block 1 onshore Uganda, Johan Castberg in Norway, and both SNE and Tortue offshore Senegal/Mauritania.

While it is unlikely they will all progress, if some of these big greenfield plays cross the line it would signal continued progress in the recovery of the conventional upstream industry.

Angus Rodger is the research director for Wood Mackenzie's upstream coverage across Asia-Pacific. He has more than a decade of upstream experience across the region. He is also the global lead and author of Wood Mackenzie’s benchmark analysis of global pre-FID delays, including studies on cost deflation and project evolution. He has participated in a wide range of consulting projects for international and national oil companies, including new business development, mergers and acquisitions, regional basin screening, and gas development. Prior to Wood Mackenzie, he worked in the upstream industry for 5 years, covering the North Sea, West Africa, and Southeast Asia.