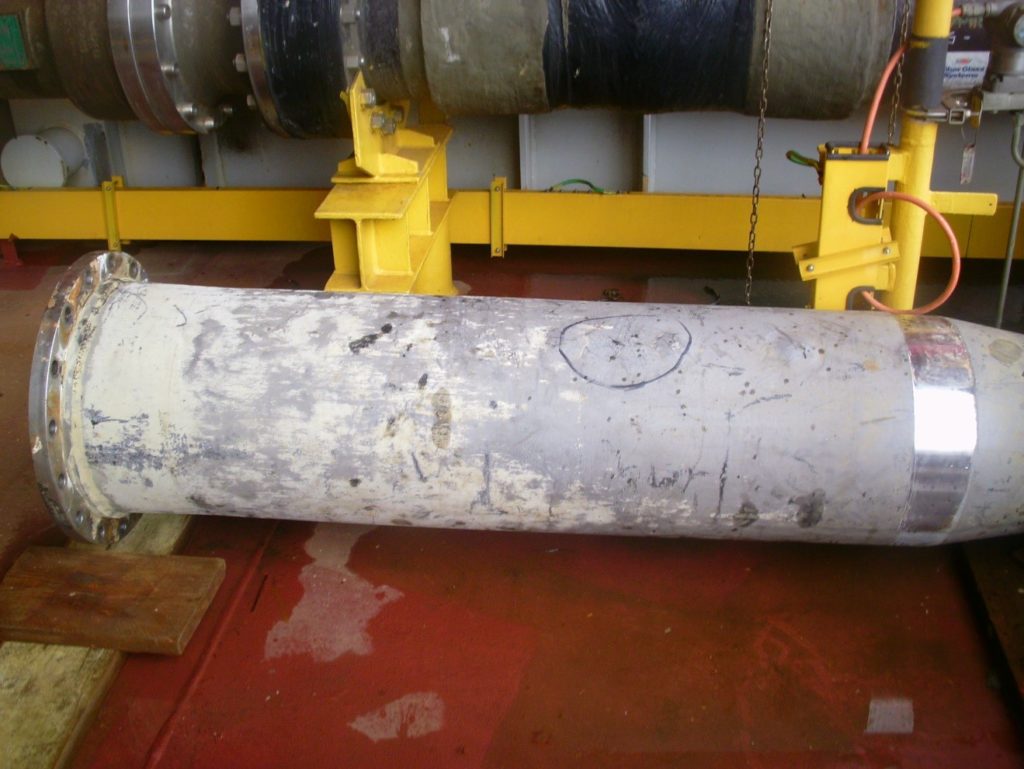 The corrosion and holes observed in the column. Source: Paper SPE 189091.

During the dismantling and removal of fire-water-pump (FWP) columns of superduplex stainless steel barely 1 year after plant startup in a redeveloped brownfield offshore Nigeria, the unexpected was observed: severe localized pitting corrosion affected the columns. This paper explores the finding that, even though seawater chlorination was present, the chlorination was not the dominant factor that led to the corrosion; instead, manufacturing imperfections were responsible.

Material resistance to pitting corrosion is measured by a pitting resistance equivalent number (PREN) value, used as the value to evaluate the resistance to pitting in an overall corrosive environment. PREN values higher than 32 are considered seawater (corrosion)-resistant. The higher the PREN value of an alloy, the higher its critical pitting temperature, which is the minimum temperature required to produce pitting corrosion. The standard duplex-stainless-steel grades have a PREN of 30–40; superduplex grades have a PREN of greater than 40.

For the reduction of gas flaring and exploitation of additional reserves, the construction of new gas-treatment and compression facilities was required for the brownfield offshore Nigeria. The new platform was also equipped with three FWPs of 50% capacity each, meaning that two pumps could run at 100% capacity with a redundancy of one.

There are 11 columns altogether, with each column divided into three sections. The bottom and most of the intermediate portion of each column, together with the pump, are submerged in seawater. According to the manufacturer’s document, the impellers and the columns are made of superduplex stainless steel.

During initial installation of the pumps (April and May of 2014), it was discovered that there were no anodes for cathodic protection of the pumps. Suitable anodes for installation were requested, but the pumps were still installed. Normally, cathodic protection is not a common practice for materials made of superduplex stainless steel, given that the materials themselves are extremely corrosion-resistant. Note that the manufacturer deliberately did not include anodes in the design of the pump; the idea of anode installation was a request from the user/client for the purpose of double assurance. The new plant effectively started up in December 2014, with the FWPs commissioned and put fully into use for normal weekly run tests, deluge tests, and drills. The anodes arrived in August 2015, at which time the pumps needed to be dismantled for their installation.

It was therefore quite surprising that after less than 1 year of service (December 2014 to August 2015) of supposedly strong and pitting-corrosion-resistant superduplex stainless-steel materials used in constructing the FWP columns, severe pitting corrosion was found on two of the submerged columns when one of the three pumps was being dismantled and recoupled with the clamping of anodes on the bottom column. Pin holes were seen on close observation of these columns. This led to the dismantling and removal of two columns for thorough visual inspection and thickness measurements. This step would later be extended to all three pumps.

Visual inspection and thickness measurements were carried out on all 11 columns of FWP C on the 4 August 2015. Note that the bottom column (i.e., the last column attached to the pump impellers) is here referred to as Column 11 and used as the reference column counting from the bottom to the top (11 to 1) in order to differentiate columns that are submerged in water from the ones that are not.

On the basis of these findings, FWP A was dismantled in September 2015 and FWP B in October 2015 for further inspection of the columns. Similar observations were made with respect to these columns, especially the lowermost column and all other submerged columns (Figs. 1 and 2). While attention was focused on the role played by chlorine, this turned out to be merely a distraction from discovery of the true cause of the pitting.

It is well-understood that chemistry can initiate pitting corrosion in otherwise corrosion-resistant material if aggressive chemicals such as chlorides are involved. High temperatures (600° to 900°C) have been known to decrease significantly the mechanical properties and corrosion resistance of duplex stainless steel. Pitting corrosion in duplex stainless steels can also be caused by a mechanical breach of the passive layer (oxide film) as a result of inclusions and addition of impurities during the manufacturing process. Manganese (II) sulfide (MnS) inclusion has been proved in several studies to be the major cause of pitting initiation in stainless steels; however, modern manufacturing of duplex stainless steel has ensured that impurities and inclusions such as MnS are completely eliminated. Nevertheless, the metallurgy of the FWP columns was eventually examined in an effort to determine the source of the corrosion.

The columns were manufactured by a casting process. Note the square-like shape of the holes in Fig. 1. This shape was recognized as being a “chaplet,” also called “core support” in the foundry process. These are small metal supports that bridge the gap between the mold surface and the core. But because this chaplet becomes part of the casting, the chaplets must be of the same or similar material as the metal being cast. In this case, the chaplets were used to support the core in the mold in order to ensure an equal thickness all along the column—the columns were poured in a horizontal position. These chaplets are available for stainless steel as SS 316L only, which is a different material from the column material itself, which is made of A890 Grade 6A. Therefore, the chaplets should have been properly removed and the zone rewelded with A890 Grade 6A in the last step of the manufacturing of these superduplex stainless-steel columns. Three possible scenarios were considered in determining how the problem had arisen.

In all three scenarios, the probability of leaving an impurity in the final manufactured column is likely. The presence of the chaplet impurity in the final manufactured columns created the ingredient for the localized pitting corrosion because of the depassivation of each small chaplet area. This explains why corrosion and holes were observed at almost the same location and axis for all the columns (Fig. 2). Chlorination was merely an additional ingredient or facilitator for the localized pitting and holes; hence, the submerged columns in the chlorinated seawater had the most noticeable pitting corrosion and holes while there were significant metal losses but no visible holes for the top portions of the columns. Pitting corrosion was destined to occur in each column with or without chlorination.

This article, written by JPT Technology Editor Chris Carpenter, contains highlights of paper OTC 189091, “Localized Pitting Corrosion of Superduplex Stainless Steel in a Seawater Application: Practical Case of When Chlorination Was Not to Blame,” by Moses A.O. Alum, Total, prepared for the 2017 Nigeria Annual International Conference and Exhibition, Lagos, 31 July–2 August. The paper has not been peer reviewed.

How To Optimize Tubing Material Selections Using the PREN Value

Material selection is a first line of defense against corrosion. This article reviews how to recognize pitting and crevice corrosion, as well as how to optimize tubing material selections for marine oil and gas applications based on the material’s PREN value.

Westcoast Energy revised its inspection practices following the 2018 incident. Its model used to predict crack growth did not take into account all uncertainties