Newfield has more than 350,000 net acres in the STACK and SCOOP plays, most of which are held by production. The company currently spends more than 80% of its capital in Oklahoma’s Anadarko Basin, where the STACK is located. It is currently working on a comprehensive pilot program in the Meramec, testing multiple vertical and horizontal spacing configurations as well as selective placement across oil and volatile oil fluid windows. The company said that comprehensive water infrastructure investments are a key part of the pilot.

Newfield drilled its first horizontal well in the STACK in 2012 and has spent more than $40 million in water management infrastructure in the play. Its infrastructure includes freshwater storage, produced water storage, and a high-density polyethylene (HDPE) pipeline system. In March, it broke ground on the Barton Water Recycling Facility, which is expected to process approximately 30,000 BWPD upon completion. The Barton facility will use aerated biologic treatment technology to convert produced water into recycled water for hydraulic fracturing operations. 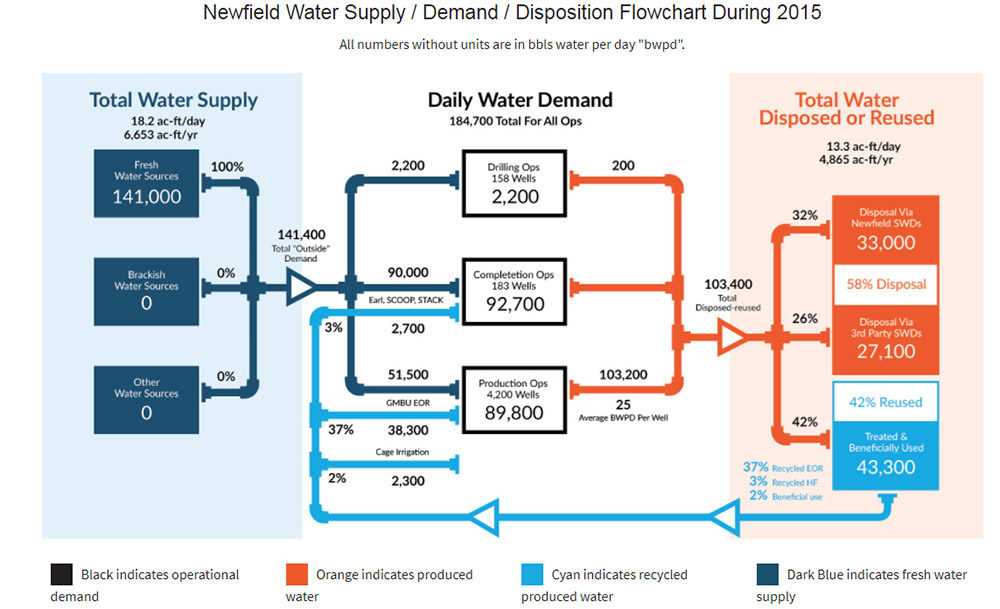 Hetrick said Newfield learned several lessons in implementing its water management plan in the region that could be useful for other companies in the future. One such lesson was that it is important not to take for granted the amount of time it takes to develop a workable plan. Hetrick said that securing financial investment for any new technology in a water recycling facility is a challenge, and in developing their strategies water management teams should expect constant spending battles.

“We had to fight each year for the budget,” he said. “You have to present it, and then a couple of months later you have to present it again because someone else has his budget and it takes away from your budget, so it’s a constant fight for you to fund your project.”

The relationship between water management teams and the landowners can also determine how much of a company’s planned infrastructure gets installed. Hetrick said that landowners who also own the mineral rights in a particular area are generally more supportive of infrastructure projects.

“If the landowner is not the mineral owner, or it’s a family that has an estate that’s in dispute and you’re dealing with family members who don’t like each other, it’s a lot harder to get permission to do things. It doesn’t happen overnight. In the budgeting and planning part, there are a few land components you need to consider if you haven’t thought of them already,” he said.

“If you’re going to be in it for the long haul, you’re going to need lots of storage,” Hetrick said. “You have to have significant storage capacity because you can’t, for instance, deliver 3 million barrels to a pad in 30 days without having a lot of redundancy in the system.”