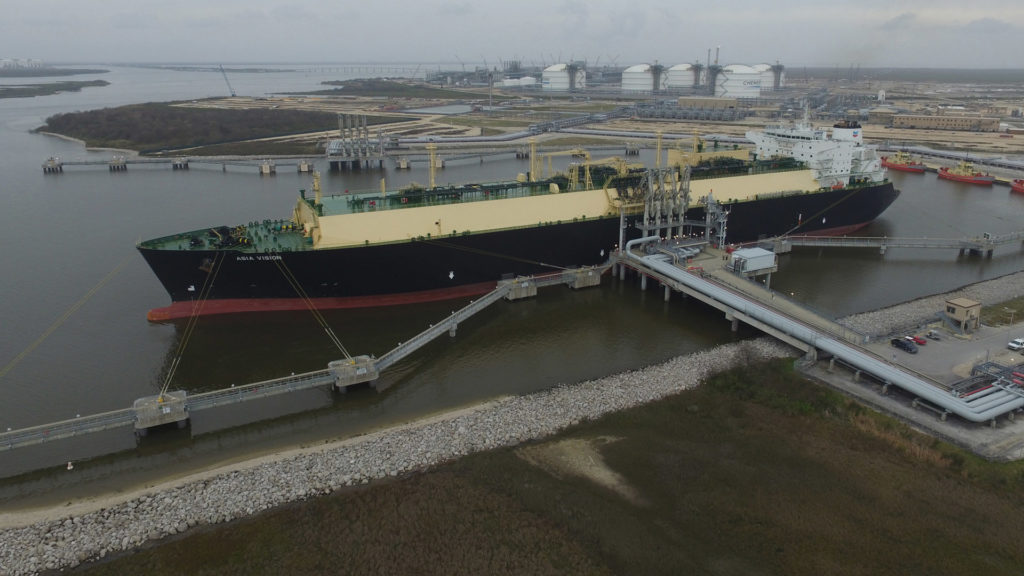 After completion of the fourth liquefaction unit at the Sabine Pass LNG terminal in Louisiana in August, total US natural gas liquefaction capacity in the Lower 48 states increased to 2.8 Bcf/D. US LNG exports are now averaging 1.9 Bcf/D. Source: Cheniere Energy.

The US Energy Information Administration (EIA) reported that an increase in online liquefied natural gas (LNG) terminals has spurred on a subsequent increase in LNG export volumes. In August 2017, total US natural gas liquefaction capacity in the Lower 48 states increased to 2.8 Bcf/D following the completion of the fourth liquefaction unit at the Sabine Pass LNG terminal in Louisiana. With increasing liquefaction capacity and utilization, the EIA said that US LNG exports are now averaging 1.9 Bcf/D, and capacity utilization has averaged 80% for the year based on data through the end of November.

Located on the coast of the US Gulf of Mexico (GOM) near the Louisiana-Texas border, Sabine Pass comprises four existing natural gas liquefaction units, or trains, with a fifth train currently under construction. When complete, Sabine Pass will have a total liquefaction capacity of 3.5 Bcf/D. Five additional LNG projects are currently under construction in the United States, and they are expected to increase total US liquefaction capacity to 9.6 Bcf/D by the end of 2019.

Sabine Pass is one of several facilities the EIA pointed out as having an impact on LNG export volumes:

The EIA estimated that overall utilization of existing LNG liquefaction facilities will average 80% in 2017 and 79% in 2018. The agency said that several factors can affect utilization rates, including weather-related disruptions, demand fluctuations, seasonality in import markets, production schedules for new LNG facilities, and maintenance on existing facilities.

At Sabine Pass, the ramp-up process combined with maintenance on Train 1 resulted in capacity utilization for Trains 1 and 2, averaging 51% in 2016. The EIA reported that capacity increased in 2017 with the addition of Trains 3 and 4, but the ramp-up periods for those trains, as well as lower spring demand in markets in Asia and Europe and disruptions caused by Hurricane Harvey in August, limited total utilization.

Exports from Sabine Pass began to increase in September as Train 4 ramped up to full production—reaching 2.7 Bcf/D in November—with an overall capacity utilization rate of 96% across four trains. Utilization at Sabine Pass is projected to remain above 90% this winter as a result of expected strong natural gas demand and high spot LNG prices in Asia and Europe.