Decommissioning Challenges in the Gulf of Mexico 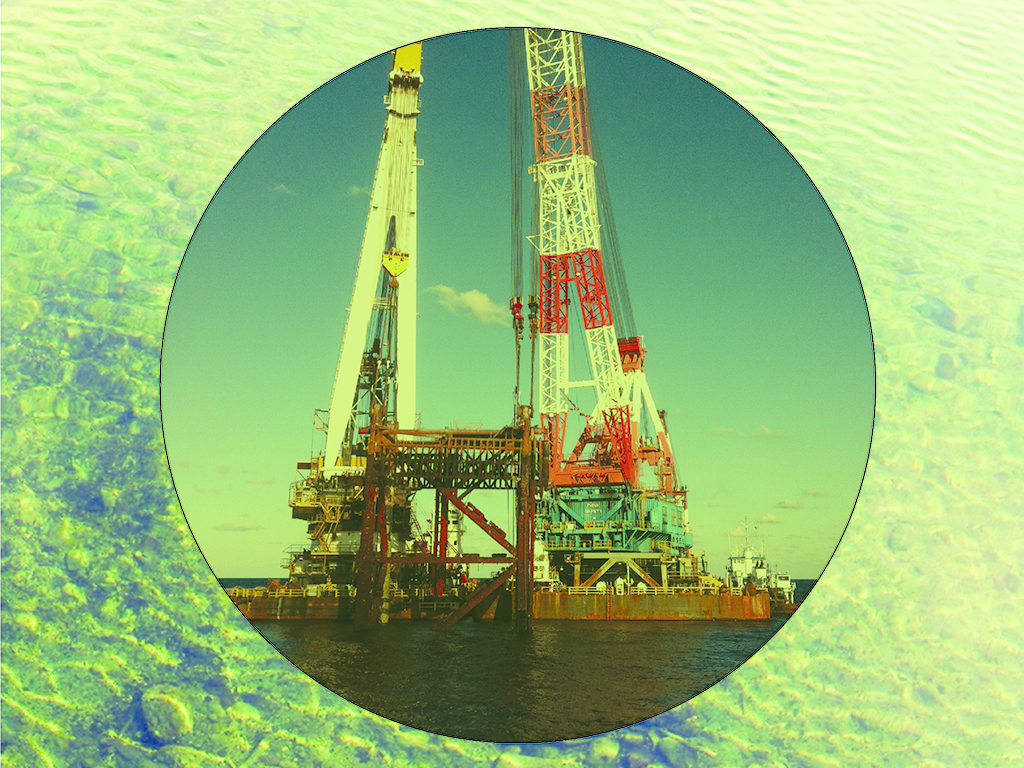 Driven partly by the US Department of the Interior’s (DOI) Notice to Lessees and Operators (NTL) 2010-G05 for decommissioning of idle wells and structures on active leases in the Gulf of Mexico’s (GOM) Outer Continental Shelf (OCS), decommissioning activities are outpacing historical levels (Fig. 1 and Table 1). The NTL, also known as the Idle Iron NTL, became effective in October 2010 and applies to the plugging of wells and decommissioning of offshore infrastructure, which includes fixed platforms, pipelines, wells, caissons, and well protectors. 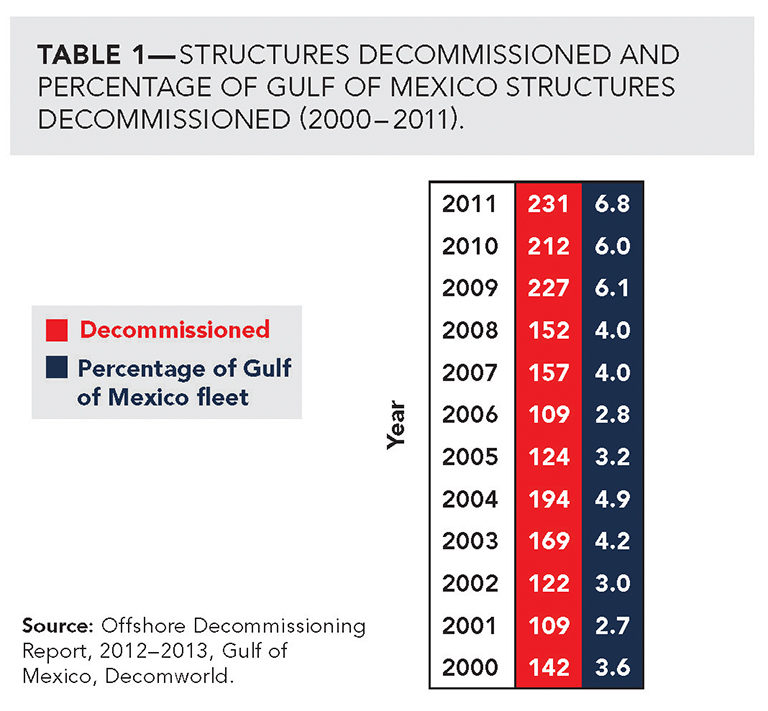 The Bureau of Safety and Environmental Enforcement (BSEE), the DOI agency responsible for the safety and environmental oversight of offshore oil and gas operations including permitting and inspections, administrates the Idle Iron NTL. The NTL specifies the maximum number of years that offshore structures and wells are allowed to remain idle before they must be abandoned. Operators have 3 years to either permanently or temporarily abandon a well that has not produced for 5 years or more. For nonproducing structures older than 5 years, operators have 5 years to remove the structure.

The presence of aging infrastructure in the GOM is evident in Fig. 5, which shows structures by vintage and water depth, indicating that 734 structures were installed from 1945 to 1972, before the first design guidance for offshore facilities was issued by the American Petroleum Institute’s  (API) Recommended Practice for the Planning, Design, and Construction of Fixed Offshore Platforms.

Wisch et al. (2004) reported that more than 1,100 platforms were installed before 1974, at which time the 100-year storm (a storm that has only a 1% chance of occurring in any given year) became the standard design condition. Though many of the 1,100-plus platforms met the 100-year criterion and incorporated research and experience findings, many still would not meet the API’s more sound design practices introduced in the mid-1980s.

The Idle Iron NTL, however, is not the single driver of decommissioning activities; the others are the acquisition and divestiture of assets, abandonment liability at the end of an asset’s life, and mitigation of the risk associated with potential infrastructure damage or destruction caused by hurricanes.

Apache Among Leaders in GOM Activity

Long before the implementation of the Idle Iron NTL, Apache was actively decommissioning in the GOM OCS. Since 2005, the company has decommissioned 196 platforms, some of which dated back to the 1950s, said Drew Hunger, decommissioning manager at Apache. Most of the platforms were from 20 to 50 years old with the drivers for decommissioning being the elimination of unnecessary maintenance costs and minimization of costs in the event of future hurricane-related damage or destruction.

In 2011, Apache decommissioned 67 platforms, the majority of which were significant structures (4- and 8-pile platforms). This year, the number of decommissioned platforms will range between 60 and 80. Hunger said,“In 2013, we will begin to taper off. We expect to go down to a more reasonable number after 2013. Our activity from 2011 to 2013 is driven by compliance with the Idle Iron NTL, as well as our catching up with a backlog from acquisitions that we made in 2010. It is a business case. Doing decommissioning work today is better than doing it tomorrow.”

Incomplete data is one of the obstacles in planning decommissioning. “In the Gulf of Mexico, we are dealing with fields that have been sold repeatedly. Over time, there is a lot of data that has gone missing,” Hunger said. Another problem with the data is that the quality of record-keeping dropped off with the industry manpower reductions in the mid-1980s, he said.

The acquisition of assets also brings with it the likelihood that those assets may not have been built or operated in line with the acquiring company’s style, said Win Thornton, vice president of decommissioning at BP. “You are dealing with things that are not that well-defined and were not yours to start with.”

Unpleasant “surprises” can derail a decommissioning project. For example, well conditions can present technical problems, such as tubing and obstructions (fish) in the well, holes in the tubing or casings, sustained casing pressure on the intermediate annuli, or pressure or bubbles through cemented annuli, Hunger said.

“It is what you do not know that hurts you, such as obstructions in the platform piles. When you are expecting to find only mud in the piles, but then find debris inside, it can prevent jetting out the piles. It then costs derrick barge time to get down and sever the piles. Occasionally, we have to sever the piles from the outside, which is extremely costly. Another surprise run into frequently is the quantity of debris around the base of a platform.

“The deteriorating conditions of some platforms to be decommissioned require us to go in and ‘safe out’ the platforms. Before starting any work on the platform, we have to do hazard hunts for safety issues, leftover chemicals, asbestos, lead paint, and naturally occurring radioactive materials,” he said.

Hunger said that although equipment shortages have not been experienced, there are shortfalls in personnel, in terms of numbers, skills, and experience. Manpower shortages directly affecting decommissioning include electric line operators, who work on the rigless plugging and abandonment (P&A) crews. The workers are involved in the jet-cutting of tubing and casing, downhole delivery of cement (dump bailing), and the setting of bridge plugs, among other tasks. “In addition to having to be experienced, they also require a license for handling explosives. Nowadays, you just don’t develop one of those overnight,” Hunger said.

Slickline operators for the rigless P&A crews are also in short supply. They are responsible for fishing, gauge runs, the setting or removal of plugs, and removing wireline retrievable valves. “That is another skill that cannot simply be taught in the classroom. It takes years and years of work to develop the ‘touch’ that it takes to work slickline,” Hunger said.

Structural engineers are also needed. “Fewer platforms have been designed or retrofitted in the last 10 to 20 years as compared to the 1950s through the 1990s. In particular, there are few young structural engineers, and that is beginning to affect what we are seeing in decommissioning. It takes a significant amount of skill to remove these platforms,” he said.

The aging of the workforce, prevalent across many fields within the oil and gas industry, is also notable in decommissioning. Hunger said, “Whether consultants or company personnel, the field supervisors are beginning to retire, no matter what the incentives are to stay out there.

“You cannot train someone in 5 or even 10 years to take the place of a field supervisor who has 30 or 40 years of experience. We require a high level of experience because we run into many challenges related to the ancient equipment that we deal with on the facilities and wells. They were there when it went in; they know how to take it out.”

Decommissioning is not only important when considering the end of life of assets. “Decommissioning should be a part of the conversation when you are thinking about developing an asset,” Thornton of BP said. Concept selection and design should include input from a company’s decommissioning group. As the decisions are made, considerations should be made for the eventual removal of the structure, e.g. the maintenance of pad eyes or ballast systems throughout the asset’s life cycle.

During the design, construction, and installation of the structure, valuable data can be recorded to help reduce the number of unknowns that can be detrimental to the efficiency and success of the decommissioning.

Besides aiding in the planning and execution of a decommissioning, the early building and maintenance of a database provides a sound basis for estimating abandonment liability for the end of life of the asset, said Thornton. When an asset is initially brought to production, the accrual of the decommissioning/abandonment estimate begins on a unit production basis against the reserves and affects the economics of the asset from that point.

He said, “Although it may not seem to significantly affect the economics during the asset’s high-production period, as the asset matures and divestiture of that asset is considered, you need to understand clearly your decommissioning liability, because it is part of the transaction. You need to sell the asset to a company that has the capability and resources to fulfill the abandonment liability.”

From the perspectives of an owner, a consultant, and a contractor—and on both sides of the buying and selling of assets—Thornton said, “Rarely is much attention paid to the decommissioning liability as part of the due diligence process. The problem is that the owner probably lacks sufficient documentation to fully grasp the abandonment liability, and the buyer does not have the time nor access to the owner’s information about the assets to independently determine the amount of liability. It is usually something that is handled after the fact as the new owner works the asset into its operations.” 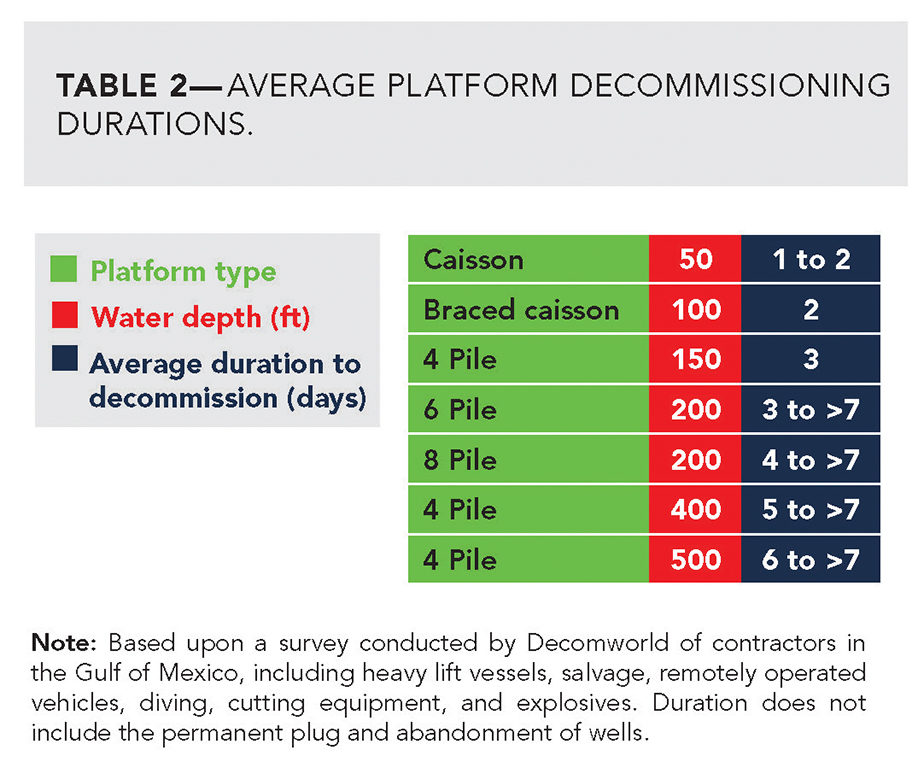 The operators’ desire and need to decrease the amount of time required for decommissioning and to improve efficiency remain the drivers for advances in technologies. Thornton said, “We have seen significant incremental improvement in technologies and capabilities over time. After hurricanes Katrina and Rita, dynamically positioned dive vessels and coupled ROV-diver work developed in response to the hurricanes’ effects on infrastructure.”

He said operators are searching for faster, more efficient tools to further advance the mechanical cutting of conductors, to perform the cutting and laying down of grouted conductors, and to perform section milling operations on casing strings—all costly operations.

After being acquired in 2019, the Well-Safe Guardian semisubmersible was extensively overhauled and upgraded. Fugro is the second company to be awarded work this year on the asset.