PHMSA Tags Construction Damage as Cause of Keystone Pipeline Spill 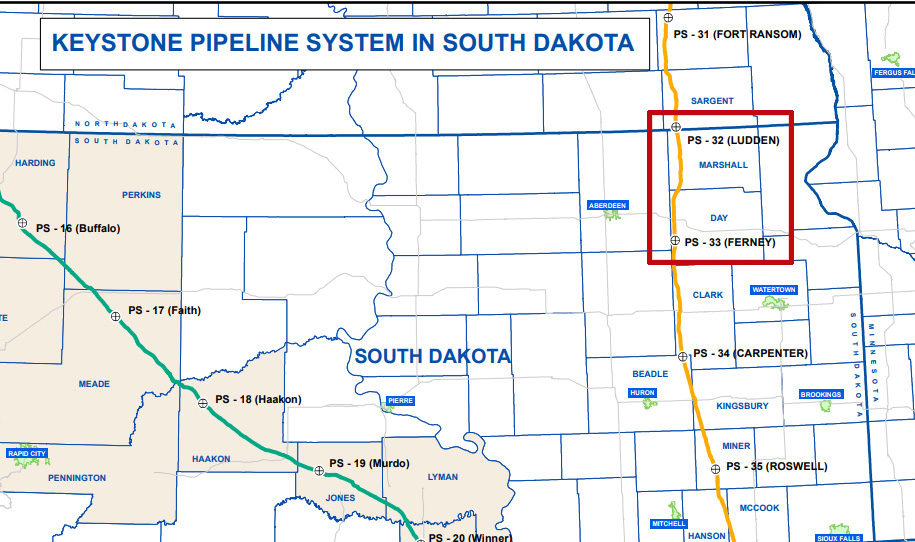 The Keystone Pipeline failure occurred in South Dakota on the 46.8-mile segment that runs between the Ludden Pump Station and Ferney Pump Station. Source: TransCanada.

In a “corrective action order” (CAO) issued by the US Pipeline and Hazardous Materials Safety Administration (PHMSA) to TransCanada on 28 November, the owner and operator of the Keystone Pipeline, the federal agency said the failure of the pipeline segment involved in the 16 November oil spill in South Dakota may have been caused by mechanical damage that occurred during initial construction in 2008.

On 26 November, TransCanada and PHMSA identified the source of the oil release. According to the CAO, the rupture point shows characteristics of mechanical damage to the pipeline and coating associated with a weight installed on the pipeline in 2008. Weights are placed on the pipeline in areas where water could potentially result in buoyancy concerns related to rises in the water table, PHMSA said.

Spotlight on the Pipe

The Keystone Pipeline is a 2,687-mile liquids pipeline system that runs from Hardisty, Alberta, Canada, to Patoka, Illinois, and Port Arthur, Texas.

The failure occurred near Amherst, South Dakota, on the approximately 46.8-mile pipeline segment that runs between the Ludden Pump Station and Ferney Pump Station. The affected portion of the 30-in. diameter pipe was removed and shipped to the National Transportation Safety Board's (NTSB) metallurgical lab in Virginia for testing.

The pipe is constructed of API 5L X-70 line pipe manufactured by Berg Steel Pipe Corporation, PHMSA said in the CAO. It has a double-submerged arc-welded seam and is coated with a fusion bond epoxy coating.

PHMSA issued a special permit in 2007 to TransCanada for the construction and operation of the Keystone Pipeline. It allowed the pipeline to be operated at a stress level of 80% of the steel pipe's specified minimum yield strength (SMYS), as opposed to the normal operating pressure for hazardous liquid pipelines of 72% of SMYS under 49 CFR [Code of Federal Regulations] 195.106 (Special Permit).

The Special Permit included 51 conditions and was designed to provide for a level of safety equal to, or greater than, the regulations in effect at the time by requiring TransCanada to more closely inspect and monitor the pipeline over its operational life than similar pipelines installed without a special permit. The Special Permit remains in effect for the life of the Keystone Pipeline unless suspended, modified or terminated by PHMSA.

On 9 April 2016, PHMSA issued a CAO due to a leak in a cracked tie-in weld. The order was closed on 30 March 2017 after all the required corrective actions were completed.

According to the CAO, at the time of the release TransCanada was operating a pig and SmartBall in the pipeline. Prior to the rupture, both tools passed the failure site without identifying any oil leakage from this location, and PHMSA said there is no indication the tools contributed to the release. [The SmartBall is a described by provider Pure Technologies as “a free-swimming solution for water, wastewater, and oil and gas pipelines that can complete long inspections in a single deployment.”]

Reuters reported on 4 December that the weights used in 2008 on the Keystone Pipeline were concrete, each weighing about 7,000 lb. The use of weights is standard practice in pipeline construction where buoyancy due to water table levels is relevant. Gravel, sand, or concrete is used. Bagged weights filled with gravel or permeable textiles are also used today, but pipelines built before 2009 like Keystone would probably have 7,000-to-9,000-lb concrete weights, Reuters said.

PHMSA ordered TransCanada to analyze data of other weights on the pipeline where the land may have similar characteristics to the location where the leak occurred within 120 days of the receipt of the CAO.

Corrosion has been postulated as another possible cause of the failure. If the outer lining of the pipeline was damaged during installation by the weights or other means, corrosive processes may have affected the steel pipe’s integrity, leading to structural weakening.

The NTSB’s metallurgical testing is underway and the results will be provided to PHMSA and TransCanada upon completion. PHMSA will issue a final report at the conclusion of its investigation and when all results from NTSB and TransCanada’s data analyses are provided.