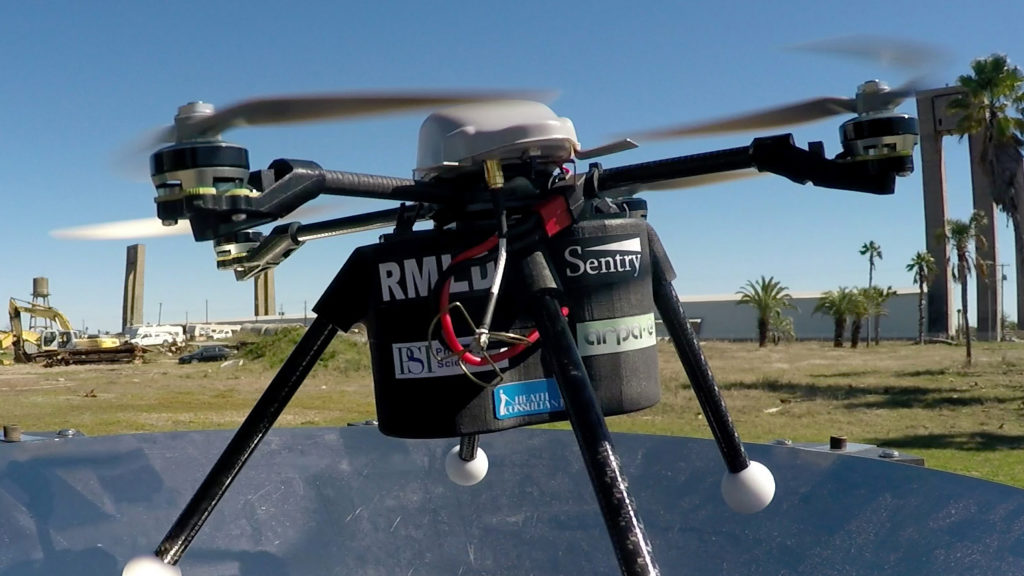 PSI
One of the 11 projects currently under development through the ARPA-E MONITOR program is a laser-based remote methane leak detector adapted for mounting on the InstantEye (pictured), an unmanned aerial vehicle from Physical Science, Inc. (PSI) and Heath Consultants. MONITOR is a three-year program created to identify low-cost technologies that can accurately locate and measure methane emissions associated with natural gas production.

Methane emissions are a significant environmental challenge for the oil and gas industry, and companies are looking for the most effective sensor-based systems to reduce methane leaks from anywhere on the wellpad, But while there are numerous technologies available to measure methane levels—including gas chromatographers, flame ionization detection systems, and catalytic sensors—these systems can be cost-prohibitive. The US Advanced Research Projects Agency-Energy (ARPA-E) estimates that current high-resolution methane measurement systems have initial capital costs of $75,000 to $100,000 along with additional installation, calibration, and operating costs.

MONITOR is similar to another methane detection program that was launched around the same time, the Environmental Defense Fund’s (EDF) Methane Detectors Challenge, in that they were designed to help spur new technologies to reduce methane emissions. But while the EDF competition targets relatively mature technologies ready for testing in a controlled environment, MONITOR targets early-stage technologies that require more time and resources to develop.

ARPA-E selected 11 technologies for the project, based on their potential to reach certain metrics:

One of the selected technologies is an autonomous natural gas leak detection system from Aeris Technologies that utilizes artificial neural networks and dispersion models to quantify and locate leaks. The system looks for correlations between methane levels gathered at a sensor and the wind direction at a specific time. The neural network collects those correlations over time and effective learns the signature downwinds for leaks in a given location and wind direction.

“What we’ve done is train the neural net in how to detect the leak, not only in its position but in the size, which is really unique,” Scherer said. “With the more traditional geometric inversions, I can get leak location but I can’t necessarily get leak size without doing tracer studies for fixed sensor systems, whereas the neural net obtains this information intrinsically.”

“When you think about the specific application of leak detection, one of the limiting factors is if the data coming out of the gas analyzers is noisy, it can be hard to find a real signal in the midst of a bunch of instrument noise. And so an instrument like this one that doesn’t have as much inherent instrument noise really gets that out of the way so that you can see the true signal a lot more clearly. When you can see that true signal and you’re not getting that confounded with a lot of instrument noise, then it’s a lot easier to see smaller leaks or leaks from farther away,” Miller said.

ARPA-E allotted $30 million to fund the development and testing, with the amount of money given to each project ranging from $1.4 million to $4.5 million. Technology evaluation is taking place at the Methane Emissions Technology Evaluation Center (METEC), a facility run by a team of researchers from CSU and the Colorado School of Mines. The METEC site team sought to design a facility that realistically mimicked the layout of a broad range of natural gas facilities and equipment. It includes a number of controlled natural gas emission release points, as well as sub-facilities that can simulate different aspects of the natural gas supply chain.

Each technology is in the midst of two rounds of independent testing and validation over a 3-year period to demonstrate system performance. Round 1 testing, completed last year, was a cooperative single-blind test with no more than one leak on a wellpad. Dan Zimmerle, principal investigator at the test site and a senior research associate at the CSU Energy Institute, described Round 1 as “the simplest possible test.” Companies had as much time as they needed to run their experiment, locate, and quantify the emissions point. As it was blind test, they did not know where the leak was or how big it was, but Zimmerle said they had a lot of flexibility to operate.

Round 2 testing is scheduled for this spring. Zimmerle said this round will involve a more structured environment with added complexities. Technologies will be tested on sites that behave in a more realistic fashion, with a variety of different emitters and leaks laid over the top of planned emitters.

“We’re in a good place right now in terms for the development of the technology and the performance we’re seeing. We’re on track with our desire to get the performance that we’re looking for at a price point we’re trying to achieve. There are some definite wins there, but with any development project there are going to be some curves and situations where you end up taking a step back while you address issues,” Miller said.

Scherer said he was also pleased with the Aeris system’s performance in Round 1, and he expects the system to easily meet the requirements, but he is still concerned about some of the testing parameters for the next round. For instance, Round 2 will include testing for transient leaks. This will help simulate real-world conditions, but Scherer said this adds a level of complexity that will present its own set of challenges.

“The Round 2 testing adds more complexity than the system may be ready for at this stage of development, in particular in terms of software,” he said. “The core technology can deal with transients very well, but it will require additional software development and testing. We are working toward a truly autonomous system so there is a lot to consider in terms of frequency of analyses, size of data sets, and other things.”

Zimmerle said that in devising a practical testing protocol, the CSU team at the test site has had to balance the desires of operators and service companies with ARPA-E’s requirements.

“We know what the operators would like to see,” Zimmerle said. “They would like a set of tests where they could look at 10 technologies and say this one is the best suited for what they’re trying to do. That’s a tall order, but if you step back a little from that we have a good idea of what leak detection programs look like, because we’ve spent a lot of time on our study campaigns doing leak detection work. We have substantial amounts of experience on that front. The real question, then, is how do you develop a protocol that is amenable to a test environment but still gets those key points?”

Beyond its financial support, the MONITOR program has acted as an interface between operators, service companies, and the companies developing each technology. Last December, ARPA-E promoted the projects at CH4 Connections, a conference hosted jointly by the Gas Technology Institute and the Energy Institute at CSU. ARPA-E will also host its annual Energy Innovation Summit in Washington, DC, on 13–15 March.

Zimmerle said companies have also been in regular contact with the US Environmental Protection Agency (EPA) and state regulatory councils, though those discussions are at “an earlier stage” than discussions with industry.

While companies such as GE and IBM already have extensive involvement with operators, other companies say they have benefitted from the added exposure. Miller said LI-COR’s interaction with the MONITOR team has been beneficial in making contacts it otherwise would not have made, as it has not traditionally worked in the oil and gas sector. Scherer described the program as a vetting process for companies looking for new technologies, and that receiving the award is a “huge validation” of his company and its technology.

“It’s getting a foot in the door for getting people to take notice of what we’re doing,” Scherer said. “We’ve gotten exposure to the regulatory bodies because they’re looking at ARPA-E. They’ve done a really good job at helping us make introductions and identify opportunities.”

ARPA-E awarded grants to 11 companies to aid in the development of methane leak detection systems.

Bridger is developing a light-detection and ranging (LiDAR) system that utilizes a near-infrared fiber laser, enabling long-range detection with high sensitivity. The laser can be deployed on a range of mobile platforms to survey multiple sites per day.

These sensors will use on-chip tunable diode laser absorption spectroscopy enabled by shortwave infrared silicon photonics technology, along with a network that can incorporate other sensor technologies like catalytic chemical sensors and long path optical sensors.

Rebellion’s long-wavelength-infrared imaging spectrometer will contain multiple bands of spectral data for detecting and characterizing methane leaks. The data will be processed using a cloud-based computing architecture that streams results to mobile devices.

Modified carbon nanotube sensors will build printed sensor arrays that can be integrated into a system for quantifying and locating methane leaks. The sensor arrays will provide unique methane “fingerprints” resulting from the responses of each sensor in the array.

This spectrometer will combine a mid-infrared sensor with a leak quantification algorithm based on advanced dispersion modeling and artificial neural networks.

LI-COR’s sensor is based on a cavity mode spectrometer. The sensor will have minimal calibration requirements enabled by software controls and a simplified hardware design.

Designed for use in methane detection systems, this laser will target a strong methane absorption region, and its tuning will allow for sharing across several applications.

This hollow optical fiber will utilize a microstructured design that allows permeability to methane but maintains low-loss propagation of light over long distances. The design allows identification of the location of methane leaks along the length of the fiber.

Frequency combs are extremely sensitive, precise, and stable tools for spectroscopic identification of natural gas constituents. This system will be able to distinguish methane, ethane, and propane, as well as methane from different carbon isotopes for differentiating biogenic and geologic methane sources.

The coded aperture will enable high-resolution imagery and high throughput. Its design will be optimized for methane and will provide the ability to distinguish between methane with different isotopic signatures for differentiating biogenic and geologic methane sources. The sensor will also identify other molecules that are common constituents of natural gas.

Proposal requests were sent to companies to solicit partnerships for the project with ADNOC and ADPower.