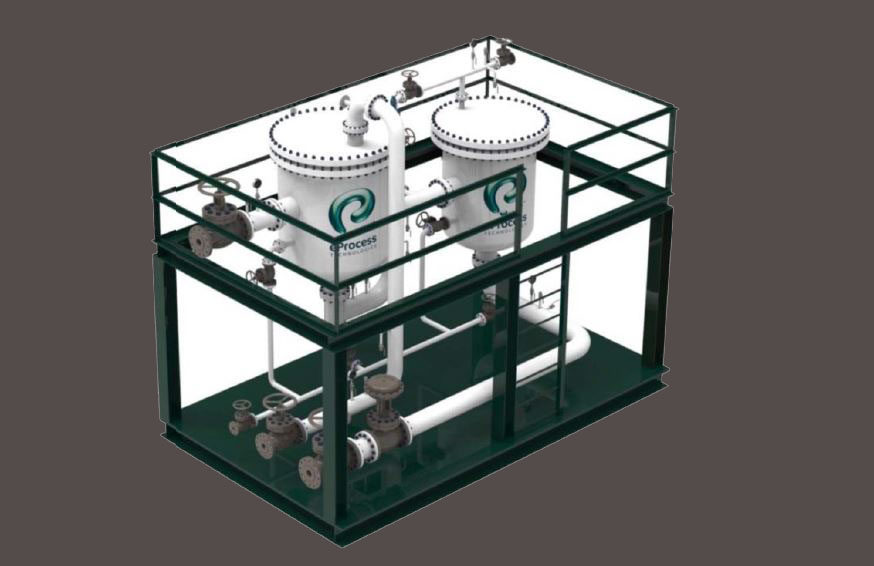 Configuration of the partial-processing skid. Source: 187109

In mature oil basins, the ability to sustain oil production depends on managing an increasing volume of produced water. A common architecture for mature fields is the spoke-and-hub structure. In this arrangement, multiple wellhead platforms connect to a centralized processing or hub platform, with the latter forwarding fluids onshore for treatment. The in-field transfer pipelines and fluid-processing equipment are designed for a fixed maximum liquid rate. Increased water cut from aging wells constrains flow within these lines and the separation systems, which in turn reduces oil production.

Compact, lightweight, simple technology to process the increased water fraction near the source and debottleneck the flow lines and existing equipment is a desirable solution.

The partial-processing methodology seeks the bulk (not complete) removal of a throughput-constraining phase from oil and gas production by use of compact processing equipment. Partial-processing technology is normally installed on facilities that have space or weight constraints. Fitting within or around existing process equipment, partial-processing equipment maximizes the capability of an existing facility footprint. The constraining phase may be gas or water, and specific technologies are available to address each. The application detailed in the complete paper addresses produced-water debottlenecking. Removal of the water constraint unlocks production potential from mature or marginal fields and has been shown to increase hydrocarbon production by 50 to 400% or more.

Design Stages and Setup. For water-constrained systems, the most significant payback comes from the removal of bulk water as far upstream as possible. High-water-cut wells are combined into a discrete manifold that may be part of or all the field production. The partial-processing system is located on this manifold, upstream from the existing process equipment. Debottlenecking at this point opens capacity in the flowlines, transfer piping, and processing facilities. The partial-processing skid can be installed on unmanned platforms with limited utilities and space and weight constraints.

Bulk water removal and treatment may have two or three stages. Stage one, preseparation, involves bulk water removal from the multiphase flow stream. A liquid/liquid hydrocyclone (preseparator) removes a bulk portion (60 to 95%) of the water from the flow stream. The preseparator provides a simple bulk oil/water split and does not need the intense separating forces required in a deoiler. Next, the removed bulk water passes to the deoiler hydrocyclone, which operates in a standard produced-water-treating mode.

A tertiary treatment stage is optional and is used for difficult separation or very stringent disposal requirements. This stage uses a compact flotation unit (CFU) for both degassing and oil polishing. The CFU removes gas effervescing from solution after the deoiler and uses that gas to float the fine oil droplets. The target oil-in-water is 10-20 ppm with tertiary treatment.

Design Guidelines. To debottleneck water-constrained systems by use of partial-processing technology, several design criteria must be met. The first is evaluation of the amount of free gas. If the gas void fraction is greater than 40%, then an initial gas/liquid separation device must be installed to lower the content. A gas/liquid separation device must also be used if the inlet flow regime is severely (gas) struggling to smooth out the surges. For effective bulk water removal from liquid flow, the production stream must have a continuous water liquid phase. The continuous phase matrix must have low viscosity.

The Songkhla basin is located along the western margin of the Gulf of Thailand. The Bua Ban North field was discovered in 2011 and lies approximately 10 km offshore. As of September 2012, Bua Ban North was producing 18,000 BOPD from a total of 26 wells, with water disposal to two injection wells. Production facilities D and E each have a dedicated mobile-offshore-production-unit (MOPU)/floating-storage-and-offloading (FSO) combination.

Process Overview. The wells are electrical-submerisble-pump (ESP)-driven and produce to the unmanned MOPU through a production manifold. Wellhead flowing pressure and temperature are 75-80 psig and 75°C, respectively. D and E facilities produce approximately 40,000 and 60,000 B/D of liquids, respectively, at approximately 90% water cut. Primary separation occurs in a two-phase gravity separator (on the MOPU) with gas going to the flare. The combined liquids (oil and water) are sent to a surge vessel, then heated, then pumped to the FSO. The liquids are heated to prevent wax formation in the infield transfer line. Oil and water separation occurs on the FSO by gravity settling. The oil is stored for offloading, while the water is returned to the MOPU by a separate infield transfer line. Biocides and oxygen scavengers are added to the water before injection into the disposal well.

Production Challenge. As of early 2015, each MOPU process system was operating at full capacity. While fluids production had increased, oil production had decreased because of increasing water cut. An infield drilling campaign was planned to restore oil production and bring on new ESP wells; however, the facilities had no capacity for the additional production. The primary bottlenecks were two-phase separation on the MOPU and the infield transfer lines to and from the FSO.

The challenge was to increase total liquids production from approximately 100,000 B/D to more than 180,000 B/D (at 90% water cut), which should yield an 80% increase in oil production. The additional water produced must be separated on the MOPU and treated to less than 50-ppm oil-in-water quality for local injection disposal. The MOPU did not have space for conventional separation and water treatment, so the retrofit equipment had to be compact and highly automated to operate in an unmanned environment.

Partial-Processing Integration. The success of a previous single-liner field trial described in the complete paper led to the design and integration of a full-scale system for each MOPU. A dedicated two-stage hydrocyclone skid consisting of preseparator and deoiler was located to receive fluids directly from the production manifold. The target total liquid production on Facility D was 80,000 B/D, of which 55,000 B/D would be treated by the partial-processing system, with the corresponding flows on Facility E at 100,000 and 75,000 B/D, respectively. The water-cut levels remained nearly constant on both MOPUs at 88 to 90%, and the partial-processing skid was designed to handle up to 85 to 96%.

Fluids from the manifold were directed to the partial-processing skid, with bulk water removal occurring in the preseparator. The reject stream, containing approximately 90% oil plus any gas, was returned to the manifold downstream of the diversion valve to continue to existing facilities.

A retrofit was made to this vessel to allow for three-phase separation that provided additional water handling. The removed water was treated by a deoiler vessel that was converted from an existing desanding hydrocyclone vessel. Of the production water stream, 75% is removed and treated by the partial-processing skid, and 10% is removed and treated by the production separator and retrofit deoiler, with the remaining 15% reporting to the FSO.

Skid-System Design. Upgrade of the water treating capabilities on each MOPU consisted of fabricating new partial-processing skids and converting an existing vessel. While the main skid was in fabrication, the first debottlenecking step was to convert an existing desander on each MOPU into a deoiler.

Fabrication of the two full-size skids was completed within 16 weeks. The general layout of the skid design is shown in Fig. 1 (above). Both the preseparator and deoiler vessels are oriented vertically to meet space requirements and to handle free gas. Vertical orientation prevents free gas buildup in the inlet chamber (primarily an issue with the first stage unit). The control system monitors pressure differential (inlet-reject and inlet-underflow) for both stages. Reject pressure is set manually for both stages, and flow control is set on deoiler underflow.

The installed skid had a final footprint of 5.0 m length by 2.5 m width, thus fitting into less than 50% of the allotted area.

The primary goal of the water-management retrofit was to allow increased fluid handling, which increased oil production by 80%. The reduction in operating expenditure proved to be as valuable as a production increase, and the entire project realized a 3-month payback.

The removal of bulk water from the production stream reduced backpressure in the infield transfer lines, corresponding to a 73% reduction in pump-power requirement to move liquids from the MOPU to the FSO and a 60% reduction to move the water back for disposal. Lower power use means decreased fuel consumption on each facility. In addition, reducing the pipeline pressure also lowered the manifold pressure, which then lowered the pressure at the wellhead. Thus, the ESP wells generated more oil for the same input energy.

All liquids transferred from the MOPU to the FSO are heated to prevent cooling of the crude wax below the precipitation temperature in the transfer line (the piping lies below the sea surface). Wax formation in this piping would lead to flow-assurance issues. The reduction of water cut from 90 to 50% removed 55,000 and 75,000 B/D from Facilities D and E, respectively, without the need for heating. Less heat is lost to water, and the liquid-heating reduction proved to be the largest cost savings.