Highlights in Projects, Facilities, and Construction 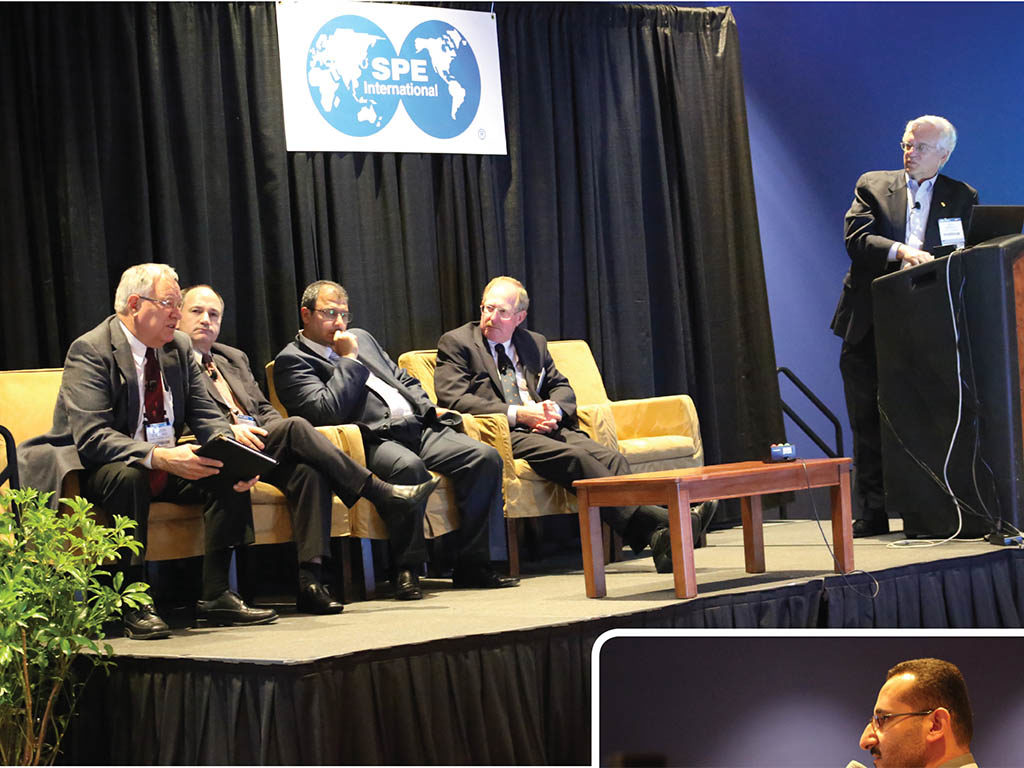 The expanded projects, facilities, and construction (PFC) program at the Society of Petroleum Engineers’ Annual Technical Conference and Exhibition (SPE ATCE) held in San Antonio in October proved to be popular among conference attendees.

The approaches to the development and performance of large exploration and production (E&P) projects took center stage at the “Learnings From Facilities Megaprojects” dinner and panel session attended by 153 people.

Moderated by Ken Arnold, senior technical adviser with WorleyParsons, the panelists presented their observations and suggestions for improvement. Organizational leadership and commitment, realistic project scheduling, and integration of project teams were identified as the keys to successful projects.

Edward W. Merrow, president and chief executive officer of Independent Project Analysis (IPA), contrasted the success and failure rates of large E&P projects with large projects in the minerals, chemicals, and hydrocarbons processing industries. Since 1992, IPA has benchmarked more than 2,000 new reservoir developments by international, national, and independent oil companies around the world. Criteria for failure of a project included increases in real costs of 25% or more, overspending of 25% or more, schedule slippage of 25% or more, the project schedule exceeding the industry average schedule by 50% or more, and the occurrence of severe and continuing production problems in the first 2 years.

From 1992 to 2002, the success rates of the E&P and industrial sectors were on a par at approximately 50%. However, from 2002 to 2012, E&P project performance collapsed to a success rate of less than 30% while other sectors showed no change.

What changed in E&P to cause this fall-off in project performance? Merrow said management changed its focus from delivering projects well to delivering projects quickly. Accelerated schedules are pushed as early as the appraisal phase, resulting in lower-quality front-end work. Higher project leader turnover occurs, and teams have inadequate time to become integrated. Consequences of the aggressive scheduling include more than 35% cost growth, a 1.37 cost-effectiveness index, greater than 30% slippage in scheduling, and 48% production attainment for the first 2 years with first oil production delivered 17 months after the promised date.

Merrow said this approach to major developments is destroying vast amounts of shareholder value and will continue to do so until leaders at the corporate level change their organizations’ approaches to new reservoir development.

Abdulrahman Al-Jarri, manager of the Production and Facilities Development Department at Saudi Aramco, shared the following “10 Pillars of Success” that drive his company’s approach to
large-scale developments:

In reviewing lessons learned from previous projects, Petrobras identified strengths in management of facilities costs, the execution schedule from the start of detailed engineering to the first oil, and equipment standardization. The need for improvement was identified in the execution of planning and controls for surface facilities and project team integration.

Using integrated planning in presalt development (PLANSAL), Petrobras has increased the E&P participation and control in the facilities execution plan. Besides the existing PLANSAL, each project has an integrated team with its own project plan.

Based on his experience, Sterling said that institutional memory is an illusion, but team-to-team learnings can be helpful.

Rigidly enforced processes create a compliance mentality and an activity culture and severely inhibit outcome-oriented thinking and a creative and innovative atmosphere.

As an example, Sterling said that, in the early 2000s, he observed the pride with which a team was conducting its rigidly mandated stage gate reviews and the innovative ways in which deviations were explained as the project schedule got out of control and costs escalated.

Many team members expressed relief that they were held accountable for the processes—which they could follow—rather than the outcome. “Processes matter; leadership matters a lot more,” Sterling said.

“The good news for us in the projects, facilities, and construction business is that there’s one trillion dollars to be spent in the next 25 years on energy infrastructure,” said Dick Westney of Westney and Associates. “For the people who are actually responsible for that money, I don’t know how happy they are,” he added.

His comment, delivered at the panel session, “Challenges in Projects, Facilities, and Construction,” referenced current statistics that 65% of industrial projects with budgets exceeding
USD 1 billion fail to meet their business objectives. “We can do better,” Westney said.

The primary problem, according to Westney, is that conventional approaches do not always apply to current projects. Size, complexity, and risk have grown when compared to traditional project management best practice regimes, which were primarily developed in the 1980s and 1990s. “It took about a decade for companies to adopt these and implement them into their project management schemes,” he said.

Conventional mindsets and behaviors can also be counter- productive, according to Westney. “Our industry has a tendency to reward overconfidence, and we have a bias toward optimism.” Westney also cited uncertainty as one of the major challenges to facilities construction. “We tend to place certainties into projects that aren’t there,” he said.

Culturally, the industry has issues when it comes to project management. Tactical-level project risks can be managed easily on the front end. However, with today’s megaprojects, there are additional external risks, or strategic risks, that are not as easy to manage on the project level. Economics, market conditions, and geopolitical risks can each affect the outcome of major projects. “The scale and duration of megaprojects create high exposure to these risks and, at the project level, we don’t know how to manage them, and we probably shouldn’t try to manage them; but, somewhere in the organization, someone has to recognize and manage these risks,” Westney said.

“It’s not just the engineering challenge that makes modern projects so complex to execute,” said Cheryl Wiewiorowski at BP. “They are getting larger, funding is more difficult, and stakeholders are more demanding,” she said. The complexity of modern projects is affecting project management skills. “As recently as a decade ago, the biggest challenge facing the oil and gas industry was engineering technology,” she said. The challenges have been rapidly advanced, and engineering has applied evolution to the industry. Complex operations of much larger scope are now requiring new ways of managing these projects.

Richard Hoffer at Chevron attributed 25% of the company’s current daily production—more than 700,000 BOE/D—to the application of new technology within the last 5 years. From a project management standpoint, Hoffer cited two ways the company looks at new technology. Enabling technologies are those processes or pieces of equipment that are needed to operate. “It is important to identify these processes early and to put in the work to understand them,” he said. Enhancing technologies are those processes that are not necessarily required but may provide further efficiencies if deployed successfully. “These technologies are not mandatory; they have alternatives,” Hoffer said. “During the selection process, it is important to involve all of your SMEs (subject matter experts), project teams, and the end-users,” Hoffer said.

John Walsh at Shell rounded out the morning’s panel with a discussion on water treating challenges in chemically enhanced oil recovery (CEOR). “Use of CEOR peaked in 1986 when it subsequently declined due to lower oil prices during the period,” Walsh said. He went on to explain that it is now making a comeback because of the stabilization of oil prices and because the cost of the polymers used has remained constant. “There is a push on long-term sustainable production,” Walsh said. It is projected that CEOR has the potential to produce an additional 45 billion bbl in the US alone. In many regions, water scarcity defines water management challenges, although, Walsh said, “CEOR-extracted production will most likely double within the next 4 years.”

The technical papers session, “Enhancement of Facilities Technologies” drew more than 100 attendees with topics such as the comparison of produced water treating systems used in the North Sea and deepwater Gulf of Mexico; subsea processing in remote marginal fields; artificial neural networks for corrosion rate prediction in gas pipelines; and an update on Total’s rejuvenation of the 40-year-old OML58 facilities onshore Nigeria using simultaneous production and construction operations.

A second technical papers session, “Facilities Technology Applications,” included presentations about the assessment of artificial lifts for oil wells in Egypt; the application and evaluation of the Eulerian-granular model for characterization of sand erosion in multiphase flows; and the application of computational fluid dynamics to debottleneck production separators in a major oil field in the Middle East.

ATCE 2013 will take place in New Orleans from 30 September–2 October, and now is the time to submit paper proposals for consideration in the conference program, which focuses on all conventional and unconventional oil and gas resources from around the world. Submit a paper proposal outlining your PFC-related technical advancement, new method, case study, or practical application by 28 January 2013 online at www.spe.org/atce/2013.

The 18-month contract is for work in the Al-Nasiriyah oil field in southern Iraq’s Dhi Qar province.