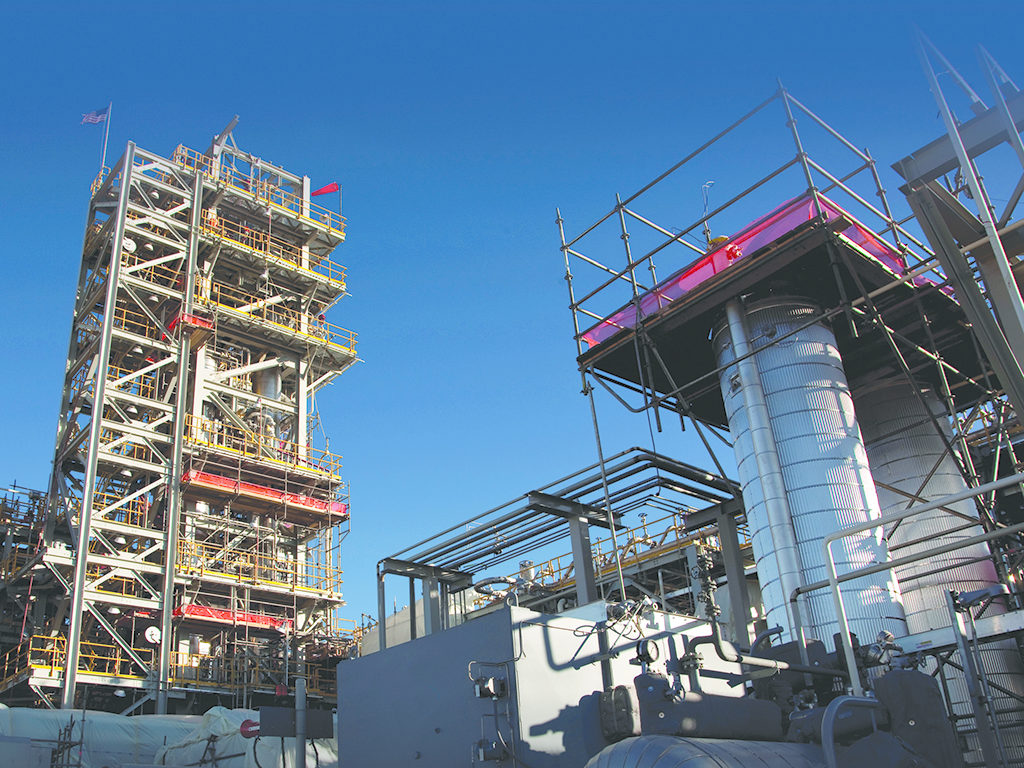 Global demand for natural gas continues to grow because it is favored as an environmentally attractive fuel relative to other hydrocarbon fuels. By 2035, the US Energy Information Administration (EIA) projects global natural gas consumption will have increased from approximately 113.1 Tcf in 2010 to 168.7 Tcf (Fig. 1).

Increasing global demand for electricity is a large contributor to this trend. Natural gas consumption is strong in those countries that are not members of the Convention on the Organisation for Economic Cooperation and Development (OECD) and whose economic growth will lead to increased demand (Fig. 2). Because of low capital costs and favorable thermal efficiencies, natural gas is an attractive alternative fuel for new power generation plants in many regions of the world in the electric power and industrial sectors.

Although natural gas is abundant, its development and production will increasingly tap global sour gas resources, one-third of which contain high concentrations of carbon dioxide (CO2) and hydrogen sulfide (H2S), also called acid gases. While the total gas reserves associated with the complex sour gas fields are huge, the commercial development rates remain relatively low because of technical challenges and environmental restrictions. Sour gas is highly corrosive, and the unit cost of development is greater, in part because of the necessary special handling and infrastructure.

Development of new technologies and solutions for efficient and cost-effective sour gas production, advanced techniques to ensure safe operation of gas production and processing facilities, disposal of acid gas through reinjection into reservoirs, and implementation of large-scale integrated projects in remote and environmentally vulnerable regions will be required to meet the demand.

ExxonMobil’s commercial demonstration plant (CDP) located at its Shute Creek treating facility near LaBarge, Wyoming, is testing the company’s proprietary Controlled Freeze Zone (CFZ) technology, a single-step cryogenic separation process that allows CO2 to freeze in a controlled method and then melts the CO2 (Fig. 3). After further distillation to recover the methane, the CO2 can be pumped for injection into dedicated wells, either for sequestering or for use in reinjection for enhanced oil recovery.

In conventional treatment methods, CO2 is separated from methane at low pressures and must be compressed at significant cost for injection into underground storage. The CFZ process, in contrast, discharges the CO2 as a high-pressure liquid, facilitating pumping to reinjection pressure and avoiding costly compression. This feature could make carbon capture and storage more economical.

The CFZ technology was invented in 1982 by Exxon Production Research; the original patent was granted in 1985. The first demonstration of CFZ technology took place in 1986 at the Clear Lake pilot plant, near Houston, with gas feed rates up to 600,000 scf/D and CO2 levels as high as 65%. The separation yielded a gas product stream with as low as 300 ppm of CO2 and a liquid CO2 stream with as low as 0.5% methane.

The goal of the testing at the Shute Creek facility, which began in early 2012, is to demonstrate that the CFZ technology can meet or exceed the specifications for sales gas over a wide range of field compositions. Capturing of design data will allow the scale-up of the CFZ facilities to handle worldwide size requirements.

When brought to the surface along with the produced hydrocarbons, acid gas contaminants contained in natural gas, such as CO2 and H2S, require proper management. Globally, there is growing interest in disposal by geosequestration or acid gas reinjection for enhanced oil recovery.

Fractionation depends on the different boiling points and volatility of the components in the sour gas stream. Using a single refrigerated tower in bulk fractionation removes the acid gas but results in residual CO2 content of 15% or more in the overhead sweet product (SPE 156944). Use of lower temperatures in the fractionator decreases the amount of impurities but results in CO2 solidification in the distillation column. To achieve the specified quality limits for pipeline-ready natural gas sales, further treatment is needed, usually involving a solvent process.

Using the Ryan-Holmes cryogenic process in a multitower fractionation process (Fig. 4) results in higher gas purity by using a heavier hydrocarbon liquid additive to suppress CO2 freezing during distillation by decreasing the freezing point of CO2 in the first column. The additive is recovered in a separate distillation column and recycled. The removed acid gas is vaporized during the recovery of the additive, unless another separate column is introduced to recover liquid CO2.

The CFZ technology, like the Ryan-Holmes process, yields a high-quality sales gas product, but no hydrocarbon additive is required when using CFZ, eliminating the need for the second distillation column to recover the additive. Because the acid gas is recovered as a high-pressure liquid, compression is unnecessary and pumping can be used for reinjection.

The CFZ tower normally uses three zones to separate methane at high-purity from acid gas (Fig. 5). The CFZ section is the location where CO2 solidification occurs in phase equilibrium (pressure/temperature/composition), and two conventional distillation sections used for stripping and rectifying are located above and below the CFZ section. Depending on the sales gas specifications and inlet composition, the rectifying section may not be necessary in all cases.

In the lower section of the tower (below the CFZ section), methane is recovered, or stripped, from the bottoms liquid stream, which contains acid gases, by conventional distillation. Above the CFZ section, the methane product stream’s CO2 content is further reduced to meet the required sales criteria by conventional distillation in a rectifying section.

The vapors from the lower stripper section rise through the CFZ section, encountering colder temperatures. The CO2 condenses and/or frosts onto the falling spray droplets or solid crystals. The solids formed in the CFZ section are pure CO2, providing greater separation factors and higher efficiency for this section than is found in conventional, vapor/liquid distillation. The removal of the solids from the vapor stream results in a product significantly depleted of CO2 exiting from the top of the CFZ section. It can be fed to an upper distillation section if further reduction of residual CO2 is required.

Jaime Valencia, CFZ technology leader at ExxonMobil Upstream Research, said the CDP has been processing feeds of 5 to 12 MMcf/d with CO2 content ranging from 25 to 70%. He said, “We have been achieving pipeline quality limits of 2% CO2. In some cases, we have reached LNG quality specifications of 50 ppm or less. We want to maximize the recovery of methane. To do so, we want to make sure that the bottoms stream contains the least amount of methane as possible. We have targeted 1% residual methane content in the bottoms stream; we routinely run 0.5% or less.”

“The range of compositions we are using tries to address the worldwide application of the technology. The program now focuses on CO2 content from 25 to 70%, but, at some future date, we will begin introducing the H2S component to represent global sour gas compositions,” said Charles Mart, manager of facilities engineering at ExxonMobil Upstream Research.

H2S is expected to be tested in the CDP in early 2013. Valencia said, “We are planning to test amounts of 5% H2S, increasing that level to as much as we can handle in the unit, possibly as high as 35% H2S. The characteristics of our feedstream blending system will determine how high the H2S concentration can be.”

Valencia said the CFZ technology is not considered to be a limiting factor in decision making about the viability of developing gas fields that contain, for example, 90% CO2. The economic constraints associated with developing such a field would be a more significant driver. He said, “In principle, this technology would be able to handle 90% CO2.”

Technological limitations are not expected in the handling of high H2S levels. Valencia said, “We [ExxonMobil] have had resources with H2S content in the 5 to 10% range. There are other fields that have higher H2S concentrations. For example, some resources in the Middle East and Caspian regions are higher.”

Maintenance of distillation sections of the CFZ technology is similar to that involved in a clean service cryogenic distillation process, Valencia said. Using demethanizers as an example of traditional cryogenic distillation, he said the upper and lower sections of the CFZ system have similar internals and operations. The maintenance issues are similar to those found in refineries and processes where fouling of internals occurs. However, the CFZ technology is a relatively clean service, so maintenance of the internals is not as extensive as in refineries.

In the CFZ section, the part different from traditional distillation towers, ordinary maintenance is required for the melting tray and the spray nozzles.

During the course of CDP testing, critical parameters have been monitored and adjusted to optimize the system’s operation and efficiency. Valencia said a number of spray nozzles have been tested in various geometric arrangements to determine the optimal configurations for ranges of compositions and throughputs. Operating pressures have been adjusted to find the sweet spot for resiliency to system upsets.

Mart said ExxonMobil plans to use the CFZ technology to develop its own resources and those in which the company holds interests. Valencia said that the range of compositions being tested and the design of the facility are such that the results will determine CFZ’s technical readiness for worldwide applications. “It could facilitate the development of resources in North America, the Middle East, southeast Asia, and other parts of Asia,” Valencia said.

Because the company is also involved in shale gas development, CFZ’s potential applicability to unconventional gas resources is being considered. “It can be competitive and advantageous for gases containing 8% or more CO2,” Valencia said.

The CFZ technology provides an alternative to the traditional means of disposal of elemental sulfur. The Claus process has been commonly used for natural gas desulfurizing, recovering elemental sulfur from gaseous H2S. The elemental sulfur was sold for use in the manufacture of fertilizers and pesticides and for uses in the rubber, cosmetic, and pharmaceutical industries. Mart said selling sulfur is a challenge because many sulfur markets in the world are saturated. “In some cases, it’s not economical to get it to market. There are examples like Canada and other locations where sulfur is not going to market.”

The CFZ technology offers an alternative disposal method for reinjection of the high-pressure bottom stream and may be a viable consideration in some parts of the world.