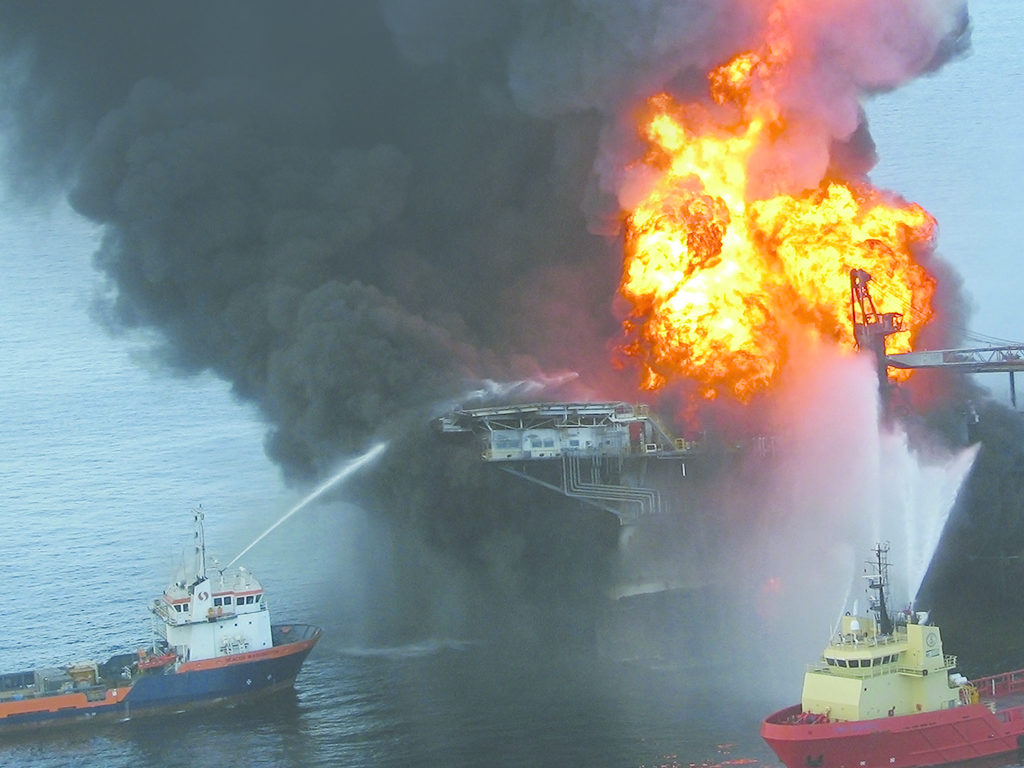 Photo of the Deepwater Horizon rig courtesy of the US Coast Guard.
Hydrocarbon fires present engineers with a special set of protection issues compared with those in which the fuel source is wood or building materials.

The energy contained in oil and gas makes them immensely useful—and dangerous. A fire fueled by hydrocarbons can quickly threaten anything exposed to it.

The AISC text is accompanied by a graph of strength retention against temperature similar to the one shown in Fig. 1.

The fire protection of structural steel, decks and bulkheads, pipe supports, process equipment, valves, and especially pressure vessels, has become a top-of-mind issue for oil and gas engineers. Among the concerns with any fire event are protecting fire responders and occupants, and preventing the escalation of fire, blocked escape routes, and outright structural collapse.

How Steel Structures Can Collapse

The fires most people think of are cellulosic. Their fuel sources are wood, carpeting, and drywall, and the temperature rise is more gradual. Cellulosic fire protection materials are tested using protocols, such as UL 263, BS 476-20, and EN 13381.

When the fuel source is hydrocarbon-based, that is, involving gasoline, crude oil, liquid gases, or solvents, the conditions within the fire are significantly different from those seen in cellulosic fires.

While no two fires are the same, this general knowledge is unhelpful when trying to develop tests to quantify the performance of fire protection systems. To enable reproducible testing, reproducible fires must be defined.

A number of test protocols have been established that specify “standard” time/temperature relationships designed to simulate the different types of fire. Some of the key heating curves are shown in Fig. 2.

Several scenarios can lead to the potential collapse of interior and exterior steel structures used in the hydrocarbon production and processing industries.

The most common is the pool fire, resulting from the ignition of spilled cargo under normal ambient conditions. The heating regimes used to test fire protection materials designed for hydrocarbon pool fires are set out in BS 476-20 and UL 1709, among others. As shown in Table 1, temperatures rise more rapidly in pool fires than in cellulosic fires. If there is a coating already protecting the steel, such fires do not erode the coating to any significant degree.

A jet fire occurs when flammable inventory is released under pressure (e.g., a leak of flammable liquids or gases from pressurized containment, such as a riser, pipe, or vessel). These fires are erosive of the incumbent fire protection. Jet fire testing uses methods such as ISO 22899 or NFPA 58. Unlike cellulosic and hydrocarbon pool fires, jet fires are not defined by a heating regime, but by the type of fuel, rate, and velocity of delivery.

A cryogenic spill on liquefied natural gas (LNG) vessels and support structures could, in a matter of seconds, lead to cold-induced brittle fracture, simply from the thermal shock of going from ambient temperatures to –260°F (–162°C). Spilled LNG will also vaporize and present a potential explosion and fire hazard.

A blast or explosion can result where vapor from the release of volatile inventory comes into contact with a source of ignition. An explosion is likely to cause damage to adjacent structures, escalating the original leak, and could result in a fire.

The ABCs of Intumescent Coatings

To avoid catastrophic losses in a rapid rise fire and in cryogenic spills, specifiers turn to intumescent epoxy coatings, a form of passive fire protection (PFP) that provides up to 4 hours of protection while a fire is being contained. These solvent-free (100% solids) coatings are applied at as much as 30 times the thickness of standard epoxy coatings and chemically react to fire by swelling to 5 to 10 times the original application thickness. A carbon-based char forms, which reduces the rate of heat transfer and extends the time for a given steel section to reach its critical failure temperature. The coating is reinforced between the first and finish coats with a fibrous mesh that supports the transition from organic epoxy resin to inorganic carbon char barrier.

The normal operating temperature of the steel substrate is a related issue. If the temperature runs at ambient temperatures, protection can be the intumescent system alone. However, especially with processing units, if the running temperature is normally elevated, the properties of the intumescent coating could be activated prematurely. To avoid this, a solvent-free epoxy thermal insulating barrier coating can be specified. The barrier also allows the epoxy PFP to be used in cryogenic applications, such as protection in situations where there is the possibility of release of LNG followed by a fire.

Epoxy intumescent coatings undergo independent fire testing, assessment, and certification by globally recognized organizations, such as Lloyd’s Register, Det Norske Veritas, and ABS. In addition, because coatings must be present to work, they should have excellent durability.

Epoxy intumescent coatings have been shown by independent testing carried out in the UK to be durable, even when damaged, unlike some other types of PFP. Corrosion under fire protection is causing concern among asset owners and operators because other types of PFP can allow corrosion of the underlying steel to develop and progress hidden behind the PFP.

It is critical to specify a durable intumescent coating formulated with high-quality corrosion-resistant resins to last the design life of the asset on which it is applied, even in the harshest maritime environments, such as the North Sea. Generally, these coatings would be formulated using raw materials that do not absorb water. Intumescent coatings also contain ammonium polyphosphate, which is a highly effective corrosion inhibitor.

The standards that address durability and weatherability include NORSOK M-501, which governs surface preparation and protective coating, and UL 1709, which determines a coated steel section’s durability performance. For UL 1709, steel sections are exposed to high temperatures for 270 days, high relative humidity for 180 days, an industrial atmosphere for 30 days, salt fog for 90 days, 12 rounds of thermal cycling for 84 days, and then fire tested.

NORSOK testing protocols expose sections to the elements and then fire test them without a topcoat that could mask early signs of breakdown. While damage to any fire protection system should be repaired at the earliest opportunity, an intumescent coating that passes NORSOK testing has shown that mechanical damage will not lead to coating failure.

In the case of achieving cryogenic spill protection, international standards do not currently exist. But through extensive testing advanced by Sherwin-Williams, it is proven that an epoxy syntactic material, in conjunction with the PFP, offers an effective solution to the cryogenic spill hazard, with or without a subsequent hydrocarbon fire.

Conducted at the South Hook LNG terminal, Europe’s largest regasification terminal, no breakdown of coating was seen in a large-scale test wherein a 1-m long protected steel test piece was subjected first to cryogenic and then rapid rise fire exposure.

As floating LNG (FLNG) vessel consortia continue to develop new projects, the company is involved in the process with those working to understand the complexities of designing solutions commensurate with the completed risk assessment.

The design life of a petrochemical asset protected with an intumescent epoxy should be 25 to 30 years. If given a choice, owners never want to shut down and bring into shore a deepwater floating production, storage, and offloading or FLNG vessel for maintenance purposes.

Incorporating fire protection on these projects is addressed once all steel components have been designed, but because of cost, weight, and safety compliance issues, its consideration starts earlier in the engineering and procurement cycle than with standard protective coatings. For a new-build project, developing a PFP coating specification ordinarily occurs in the front-end engineering and design stage.

Each steel section has a different fire rating requirement determined by the project’s safety assessment. The recommended coating thickness depends on the desired rating and the section factor of the assembly to be protected.

Section factor gives a guide to the rate at which a steel member will heat up when exposed to fire. Terms such as Hp/A (heated perimeter/cross-sectional area), A/V (surface area/volume), and W/D (weight per linear ft/heated perimeter) are used to denote the section factor, and although the terms are different in some way, all are a ratio of the surface area exposed to the fire and the weight of the steel.

Fig. 3 illustrates an intuitive understanding that the section on the left will heat up more quickly than the other one, even though their overall dimensions are similar. The more rapidly a member would heat up in a fire, the thicker the application of fire protection required for a given fire rating.

To protect steel, it is advantageous to use a coating that has been engineered to perform at the lowest required film thickness. The weight impact of the PFP can be substantial, as much as 5% of the net platform weight.  Even small weight savings can be converted to additional process equipment and living quarters. This is one of the reasons that epoxy intumescent coatings are the preferred PFP solution at sites where weight is a consideration, such as on offshore platforms. Technologies, such as cementitious fire protection, are significantly heavier.

Typically, a major oil and gas company hires an engineering, procurement, and construction (EPC) firm that establishes the specifications for the project and its component products. The EPC selects a fabricator who in turn hires the specialist PFP applicator as part of the standard procurement process.

It is recommended that the fire protection be applied before the erection of the steel, because application at this stage favors the project’s construction critical path, realized in benefits such as:

The usual method of defining the limits of fire protection is by discussion and negotiation between the design team and engineers representing the asset owner in conjunction with the insurance authorities and local and federal safety regulatory bodies.

A number of coatings manufacturers can offer a complete single source supply for petrochemical facilities, including protection to address corrosion, pool fire, jet fire, and cryogenic spill protection on a global basis. By specifying a single source for all the coatings requirements, the EPC can eliminate compatibility and responsibility issues that have troubled projects in the past.

Hydrocarbon fires present engineers with a special set of protection issues compared with those in which the fuel source is wood or building materials. Hydrocarbon fires behave differently, use different fire protection products, and involve different approvals than cellulosic fires. Coating technologies, such as FIRETEX M89/02, are available to address not only a hydrocarbon fire itself, but also to provide the necessary corrosion resistance that ensures the coating will be there when and if it is needed for the design life of the asset.