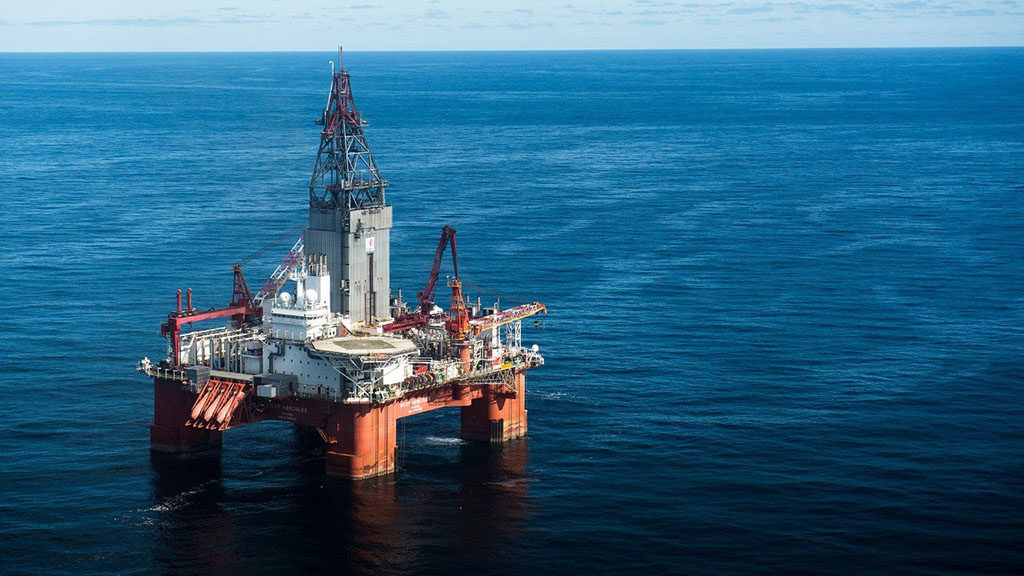 In 2015 and 2016 we saw record low levels of offshore volumes sanctioned, which effectively is hurting oilfield service companies’ backlog. With the cost cuts exploration and production players made during the downturn, coupled with the recent increase in oil prices, we now see a lot of offshore projects on a global level have become economically viable. This is leading to an increase in the number of projects in the pipeline for sanctioning, with Norway leading the comeback.

Within the segment for drilling contractors, Norway has emerged as the world’s strongest market for floating rigs, with rising demand and comparatively high dayrates. North Atlantic Drilling Limited’s semisub West Hercules, for instance, was chartered by Statoil recently for a pair of wells in the Barents Sea at a reported rate of $250,000 per day. This contract value is on par with the average floater dayrates we saw in the Norwegian market in 2017. 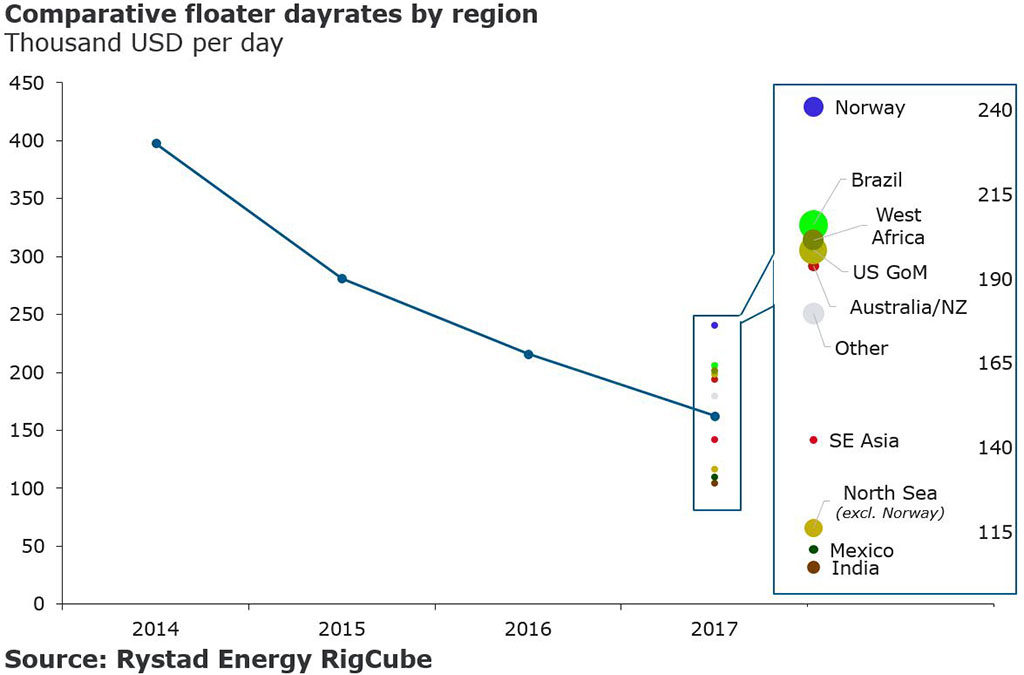 As the rig market in Norway now seems to be tightening on its way to recovery, there is also good news for service companies exposed to other services than drilling. Recent projects submitted to the Norwegian Ministry of Petroleum (NPD) show a clear turnaround in the offshore industry and make Norway the largest contributor to offshore project commitments in 2017. Several field development plans were submitted last year with a total value of more than $18 billion in greenfield capex. This made Norway the largest contributor to offshore developments last year followed by the US and Mozambique.

Last December, Statoil alone handed in the plans for approval of the Johan Castberg and Snorre expansion project with a total greenfield capex value of $8.5 billion. These two projects make up almost half of the project value sanctioned through a large number of projects on the Norwegian Continental Shelf (NCS) last year. 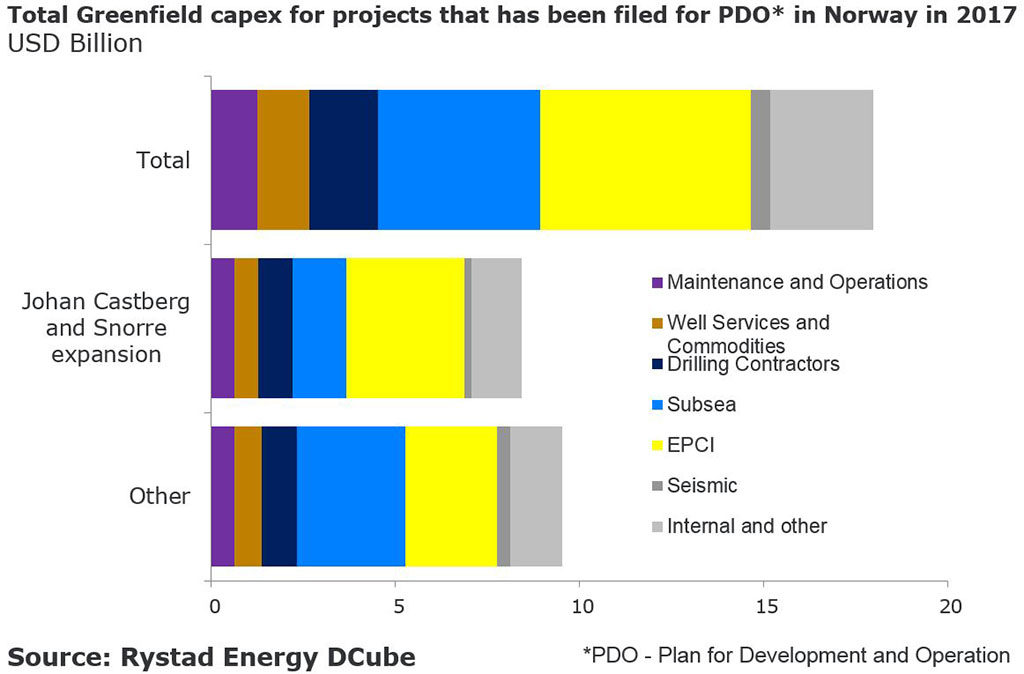 The service companies that have reaped the most benefits of the increasing activity on the NCS have been TechnipFMC, Transocean, and Subsea 7. VNG awarded TechnipFMC an integrated subsea EPCI contract. This contract also covers the delivery of subsea systems to the Fenja field (previously Pil og Bue), and according to TechnipFMC, is the largest integrated EPCI award to date. 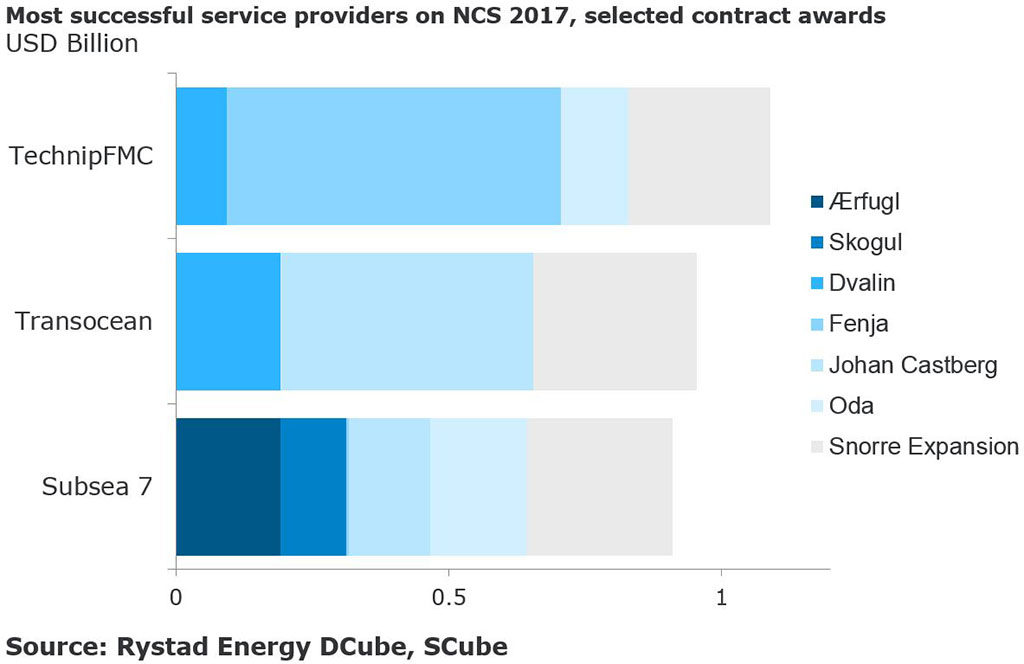 Transocean was awarded a contract with Statoil to drill 30 wells for the Johan Castberg and 24 wells for the Snorre expansion development, both of which are contingent on approval of the Plan for Development and Operation. In addition a contract was also signed with DEA for a years’ worth of work on the Dvalin field.

Subsea 7 was awarded contracts by AkerBP, their alliance partner in the North Sea. All of this suggesting that relationships with operators, contract structure, and regional exposure are key elements when handing out further contracts to the service industry in Norway as well as globally.

Republished with permission from Rystad Energy.