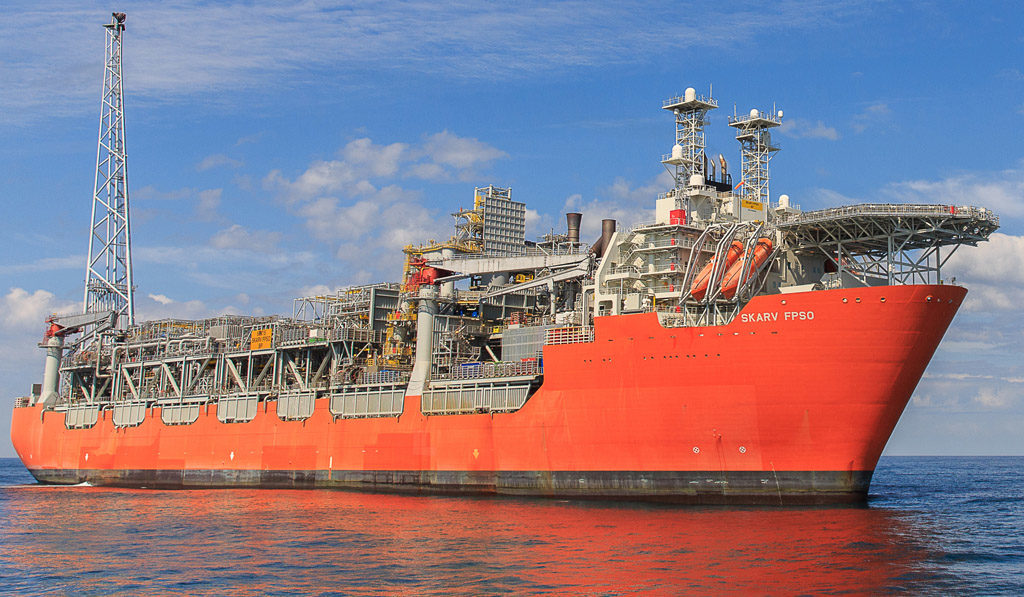 Scheduled to start up in October 2020, the Aerfugl project will tie back to Aker’s Skarv FPSO, located in the northern part of the Norwegian Sea. Source: Aker BP.

The orders cover polypropylene-coated steel outer pipes for pipe-in-pipe flowlines for the tiebacks. Corinth will supply 14-in. linepipe for the 18-km gas pipeline at Skogul and 16-in. linepipe for the 21-km Aerfugl gas pipeline. Skogul will tie back to the Alvheim FPSO, and Aerfugl ties back to the Skarv FPSO. The pipes will be manufactured this year at Corinth’s pipe mill in Thisvi, Greece, and Subsea 7 plans to conduct offshore installation by reel-lay in 2019 and 2020.

Skogul is one of the smallest fields on the Norwegian shelf, with a reserve basis of approximately 9.4 million bbl of oil. It will be developed with a two-branch well drilled from a subsea template tied-in to the installations on the Vilje field and connected via pipeline from Vilje to Alvheim. Total investments are estimated to be NOK 1.5 billion, and production is planned to start in 1Q 2020.

Aerfugl is located west of the Skarv field, 200 km west of the town of Sandnessjøen, Norway. Gas reserves are estimated at 35 Bcmbillion m3. The field will be developed in two phases. Phase One comprises the southern part of the Snadd deposit and is scheduled to start up in October 2020; the second phase comprises the northern part of Snadd with startup in 3Q 2023. Both phases are being developed with three independent satellite wells that will be tied-in to the Skarv FPSO for processing and transport.

Aker submitted Plans for Development and Operation for Skogul and Aerfugl on 15 December 2017. That week, Subsea 7 was awarded two contracts for project management and engineering of both projects as well as an additional Aker project, Valhall Flank West, which is scheduled to be completed in 2019.