Compression Moves from Topsides to Seabed in North Sea 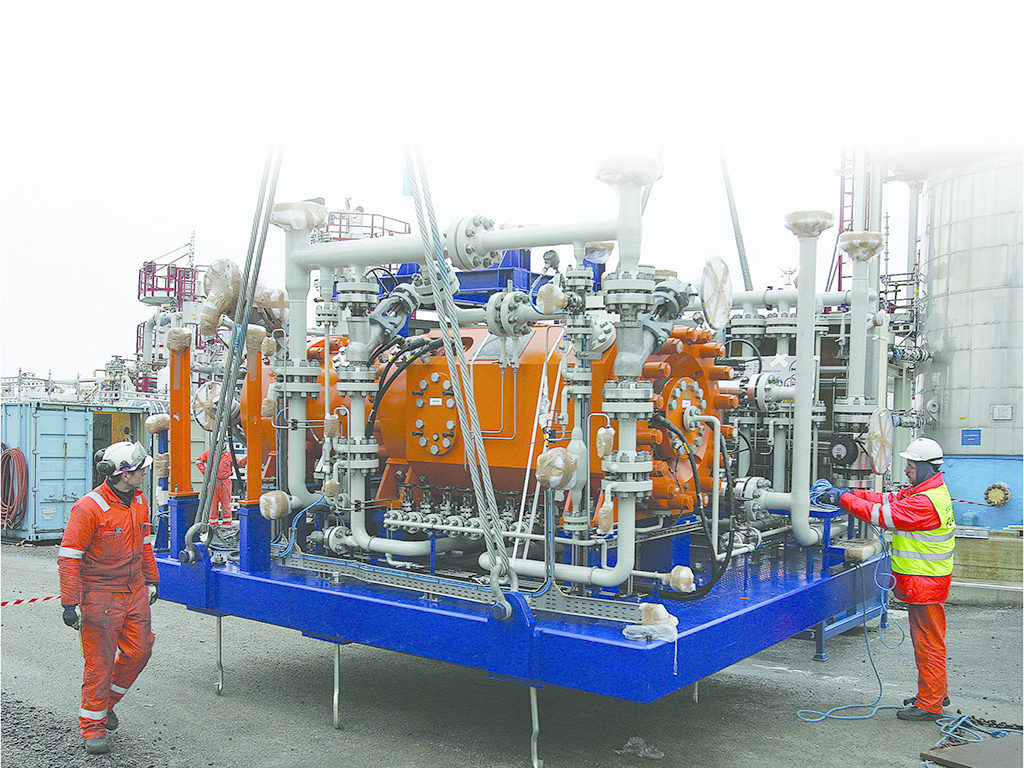 After approximately 25 years of development, subsea gas compression technology has advanced to a readiness level worthy of full implementation in the North Sea. Statoil, an early driver of the technology, in March received approval from the Norwegian Parliament for the development of subsea gas compression in the Asgard field. In May, Statoil and partner Petoro announced their decision to invest in subsea wet gas compression on the Gullfaks South Brent reservoir. Options for increasing recovery from offshore reservoirs have taken a technological leap, marking a milestone in the oil and gas industry.

In a 2011 paper (OTC 22411), the authors wrote that sustaining production in gas fields may become technically or economically unfeasible because of liquid accumulations in pipelines, lengthy step-out distances, or low natural well pressures.

Because subsea compressors can be installed closer to the wells and upstream of a riser or tieback pipeline, the suction pressure can be drawn down further than possible if deployed topside or onshore. Using the same level of power consumption, subsea compressors can sustain higher production rates over longer periods of time than the topside alternative, resulting in increased total recovery. Because the subsea compressor is unmanned and installed at the seabed, the total amount of raw material used is less and the operation costs are reduced, according to the paper. Optimization of process energy efficiency and the elimination of human activities (during normal operation) offer health, safety, and environmental benefits.

The Asgard field has two subsea satellites, Midgard and Mikkel, located 40 to 50 km away in 240 to 310 m of water, which produce gas and condensate tied back to the Asgard B semisubmersible production platform (Fig. 1).

Production has declined more rapidly than expected, and by 2014, the field’s reservoirs will have insufficient gas pressure to produce steadily. Gas pressure must be boosted to maintain stable production rates, and a minimum gas flow is required to avoid the accumulation in pipelines of monoethylene glycol (MEG) used for hydrate inhibition as MEG flows from the Asgard A floating production, storage, and offloading (FPSO) vessel to Mikkel and Midgard and then back to Asgard B. Subsea compression is expected to improve recovery from the Mikkel and Midgard fields by 278 million BOE.

The Asgard subsea compression system, for which Statoil let an NOK 650 million contract to Aker Solutions for the engineering, procurement, construction, and installation, comprises two 11.5-MW subsea compressors to be installed in a 74´44´2-m subsea station weighing 4,800 tonnes. Also included in the modular configuration will be a subsea manifold, a power distribution system, and an all-electric control system. Startup of the compressor station is scheduled for the fourth quarter of 2014, with the system expected to go online in the first half of 2015.

The harsh environmental conditions in which the Asgard system will operate require unique design considerations. Aker Solutions said the system will be installed in 250 to 300 m water depth and operate in water temperatures of approximately 7°C.

The production from Midgard and Mikkel will flow through the existing pipelines into the subsea system’s manifold station, which distributes it into two compressor trains located at the subsea compression station, according to the paper OTC 22411. The compression trains will initially operate in parallel, but they will be rebuilt in series as reservoir pressures decline.

At the compressor high-pressure side, a discharge cooler lowers the gas temperature to below the limit required by the existing pipelines before it is comingled with the liquid from the pump. The multiphase stream flows back to the manifold station and continues on to the 46-km pipelines toward the Asgard B platform.

Located approximately 45 km from the subsea compression station, the Asgard A FPSO will supply the power to run the compressors, pumps, and the electric control system. For the pumps and compressors, topside variable speed drives will convert the frequency, and topside transformers will step up the voltage for the step-out distance. At the subsea compression station, the six subsea transformers (three per compression train) will step down the voltages for the electric motors and the control system, according to OTC 22411.

There is no planned maintenance required for the Asgard subsea system, but annual visual inspections will be performed. A separate control system and network is dedicated to continuous monitoring. The measurements are evaluated using a topside condition monitoring server, and data can be transferred to onshore operational centers.

Gullfaks South, a subsea satellite field tied back to the Gullfaks A and C platforms (Fig. 2), is the site for the planned installation of a subsea wet gas compression system with startup expected in 2015. Statoil and Petoro awarded Framo Engineering the engineering, procurement, and construction contract, which includes topsides power and control systems.

The Gullfaks South compression system comprises two 5-MW wet gas compressors (Fig. 3) to be installed subsea in a water depth of 135 m and linked up with power and control modules on the Gullfaks C platform, which will provide power using two 2.5‑MW electric motors. Weighing 950 tonnes, the subsea structure size will be 34´20´12 m with a boosting-pressure capacity of 32 to 60 bar, depending on whether the compressor trains are run in parallel or connected in series.

The subsea gas compression system will be connected to existing subsea Templates L and M and piping 15 km from Gullfaks C. From the compressor station, a 15-km power and umbilical cable will be laid back to Gullfaks C.

The system is expected to handle a flow rate of 10 million scm/d. The current recovery rate from the Brent reservoir in the Gullfaks South field is 62%. A combination of subsea compression and conventional low-pressure production in a later phase may increase this to 74%. Gullfaks C production is expected to be increased by 22 million BOE.

The compact compressor size of the Gullfaks facility could serve as a model that may be applied to new and existing fields. Such facilities represent a key building block in Statoil’s goal to develop a subsea factory by 2020 for oil and gas processing on the seabed, which could be used to exploit deepwater resources and challenging Arctic fields remote from existing infrastructure.

Making the Business Case for Gullfaks

In another 2011 paper, OTC 21346, the authors discuss the business case for the Gullfaks subsea wet gas compression installation.

More than 85% of the produced gas from the Gullfaks C platform is derived from Gullfaks South Brent, Rimfaks Brent, and Skinfaks with the L, M, and N templates. Between 2012 and 2018, wells in these areas will decline in wellhead flowing pressures and would benefit from precompression or conventional low-pressure production methods.

The topside facility will require modifications of its compression equipment, including larger pipe sizes, a larger scrubber, and rewheeling of the compressors. Rewheeling is an alternative to a complete compressor redesign and replacement of equipment and is limited to the removal of the compressor internals and their replacement with a new, opitimized set of internals. Piping changes and removal of casing are not required. Rewheeling can be a cost-effective option for production optimization of mature assets and can be implemented in a few days without requiring extended compressor shutdown.

Installing a topside compressor or a subsea compression system will help to sustain and accelerate the production from Gullfaks’ subsea Templates L and M. The compression will also help to increase recovery because the wells can be produced at a lower wellhead pressure than the minimum of 30 to 33 bar (assuming 28 bar arrival pressure at the upstream topside choke) required for conventional low-pressure methods.

Benefits of subsea wet gas compression include the reduction of pressure drop in pipelines by providing pressure at the subsea wellhead as compared with application of compression at the receiving topside end. The subsea system will result in an ultimate lower abandonment pressure and be more energy efficient in its operation, according to paper OTC 21346.

The Gullfaks subsea compression system is designed with two compressor trains, which can be configured to operate in parallel or in series, providing the flexibility to tie in other prospects in the future. The design also allows for startup of dead wells. Because the subsea compression system tolerates (within limits) pressure drops in the pipeline extending toward the Gullfaks C platform, improved recovery is maintained despite pressure fluctuations, making possible the use of one of the bundled pipelines for other production. The increased temperature on the compressor outlet assists in maintaining hydrate equilibrium in the pipeline toward the platform.

McDermott was selected previously for a study of the FPU. Completion of the Trion project is expected in Q3.

Fugro and SEA-KIT’s partnership will develop unmanned vessels, while HII and Kongsberg will market naval and maritime products.

A fault was identified at the Leviathan platform’s production system. This comes a month after a malfunction was discovered at the project’s subsea pipeline.