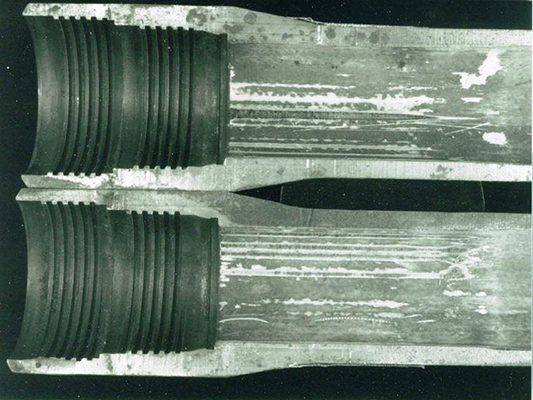 The petroleum industry injects significant volumes of water in secondary recovery, also known as waterflooding. Additionally, it disposes of large volumes of water including water from well fracing flowback. Common injectates are produced water (PWI), seawater (SWI) salt water (SWI), water disposal (WD), and fresh water from gas plant cooling towers. Also wastewater injection from industrial process waste streams. In some cases these various waters can be comingled. In every case the leading cause of corrosion is from dissolved oxygen (DO) with little or no contribution from other constituents such as H2S and CO2. However, chlorides can play a role in the degree of corrosivity of the stream as well as velocity and temperature. After more than a century of such practices the industry continues to make the same mistakes from a materials and corrosion standpoint at great cost to projects often in economic decline. This paper summarizes some of the materials that have been and continue to be misapplied and the newer practice of applying corrosion-resistant alloys (CRAs) in applications that require a long design life and/or high injection volumes.

The upstream petroleum industry historically, and inappropriately, begins most water injection (WI) projects using bare steel tubing or internally plastic-coated (IPC) steel tubing. There is a common belief, not supported by many years of contrary experience, that companies can religiously control DO to <20 ppb over the course of years with few if any excursions to higher DO levels. Moreover, the controls on DO are not judiciously maintained so DO is the ultimate cause of bare steel tubing failure. It is well documented for carbon steels as well as for many CRAs that the threshold for pitting in aerated chloride environments is 10–20 ppb (Patton 1993).

There is a wealth of published work that describes the factors that contribute to corrosion from DO primary of which are the DO concentration, temperature, chloride content, and flow velocity. Much of this work is published for alloys and materials used in seawater which has a nominal chloride concentration of about 20,000 ppm and is similar enough to many produced waters so these data can be used for reference. While this is of great benefit to understanding corrosion from DO in WI since many waters contain a similar amount of chloride as seawater, it is not altogether correct. Mameng (2014) showed a detrimental effect on pitting resistance when increasing the chloride content above 35,450 ppm for lesser alloyed CRAs and no effect for higher CRAs.

Carbon steel can corrode over a large range of rates depending on DO content and velocity according to Eggum et al. (2015). Industry experience with bare steel tubing exposed to DO content of varying concentrations often leads to failure of injection tubing in just a few years. After these predictable failures of bare steel tubing companies often choose to apply internal plastic coating (IPC).

IPC tubing has a long history for WI, in some cases successfully; however, more often it is not. This is not the fault of holidays generated during the application stage of coating but rather during running and operation of tubing. As documented by Brus (1990), and substantiated many times over, the most common causes of coating failure are; damage in the tong area that pops the coating on the inside of the tubing, driving the pin nose into the box so the coating on the pin nose flakes off and handling damage. Brus found that coated tubing failed on average 12–16 months after installation when not properly handled and installed. Another issue with IPC is coating damage from wireline runs. Fig. 1 shows corrosion at wireline tracts in coating as a result of wireline work. These types of failure in IPC tubing are quite common to this day since many operators do not follow the recommendations for handling and running IPC tubing. The result is limited life of IPC tubing on a par with bare steel.

Another option applied is internally lined tubing, lined with a cement coating or glass-reinforced epoxy (GRE). These methods have proven successful in many applications but are often not considered due to cost and reduced injection volumes because of the constricted tubing inside diameter. Solid GRE and fiber-reinforced pipe (FRP) are also sometimes used but again are limited in some applications by temperature, pressure, and cost.

Another mistaken notion in the industry is that wells originally producing oil and gas with 13Cr tubing can simply be turned around for WI service. This idea has produced several unpublished failures and still occurs in the industry at an almost universal outcome of failure in 6 months. Fig. 2 shows deep pitting in the pin area of 13Cr from aerated water after a few days. Although Vignes et al. (2008) indicate that one operator had success using 13Cr tubing for WI, albeit at DO levels down to 5 ppb another found that carbon steel injection tubing had longer life than 13Cr. Industry experience sides with the latter. Scoppio and Nice (2008) reported on pitting and crevice corrosion in 13Cr injection tubing in the Gullfaks Field in the North Sea from seawater injection due to poor deaeration of the injected seawater. One of the serious drawbacks of 13Cr components in seawater injection is the very rapid pit initiation when the DO exceeds ~ 10 ppb.

In the last few years projects have recognized the difficulty of attaining and maintaining DO contents of < 10 ppb on a continuous basis for the entire life of a project. In addition, long-life projects must consider the reliability of WI tubulars for design lives of 20 years and longer. Deepwater Gulf of Mexico projects such as Chevron Tahiti, BP Thunder Horse, and BHP Shenzi, as well as in West Africa, have opted to run super duplex stainless steel (SDSS) tubing. More recently operators in some of the shale basins that need to dispose of large volumes of water have likewise run SDSS tubing.

Limited work has been performed by operators to examine the corrosion of CRAs in WI service with small amounts of DO such as 20 ppb and 200 ppb. An increase in pitting and crevice corrosion with increasing temperature and DO for the lower alloys such as 13Cr has been noted but no effect for duplex stainless steels and Alloy 718 up to 140ºF (60ºC) Evans et al. (2004). These efforts help but do not address the onshore situation where injection circuits are short and fully aerated. In this case the more applicable parameters are the critical pitting temperature (CPT) and the critical crevice temperature (CCT). A significant literature exists on CPT and less on CCT for stainless steels and some nickel-based alloys derived by testing in the ASTM G48 solution which is 6% FeCl3 and for fewer instances in 1–3% NaCl. The former test while useful for screening purposes is completely inapplicable to actual WI service since the pH of the solution is ~1.0 compared to many WI environments that are near neutral. A superior method to determine CPT is provided in ASTM G150 for stainless steels. Few data are available from this method with no corresponding simple test for CCT. Table 1 shows a comparison of data for CPT for 22Cr and 25Cr DSS as a function of the test method. It is not the purpose here to discuss the relative merits of these tests but to demonstrate the variability of the CPT depending on the methods used.

There is wide industry use of the pitting resistance equivalent number (PREN) but it does not give a definitively CPT for any alloy and is only intended to compare alloys of different chemical compositions suggesting some resistance to pitting. Also PREN is only applicable to environments of aerated brine and not, as often mistakenly used, to fully deaerate producing environments.

Other factors not addressed here are the possible use of chlorine for microbial-influenced corrosion especially for seawater injection and possible scale formation that may adversely impact any tubular material due to scale deposition and under-deposit attack.

Research Needs for the Economic Application of CRAs for WI

There is a desire to use CRAs for WI tubing; however, the dearth of data specific to this application makes the economic use of these alloys difficult. There is an immediate need for CPT and CCT data for CRAs in real WI environments and software models that can predict the onset of pitting and crevice corrosion as a function of DO content, chloride content, pH, velocity, and temperature. Consideration of flowing bottomhole temperature (BHT) vs. static BHT in regards to CPT and CCT should also be considered. More information on the CPT and CCT of nickel-based CRAs including alloys such as Alloy 925 and 718 that are commonly used for packers in WI is needed. In some cases where stock tubing is available, nickel-based CRAs might be considered for WI; however, there is no adequate description of the pitting and crevice corrosion resistance in brine waters for these alloys. Klapper and Rebak (2017) explained the maximum test temperature in ferric chloride solution using the G48 method is 85ºC due to the thermal instability of the solution at elevated temperature. They show the CPT for most of the highly alloyed nickel-based alloys can only be listed as >85ºC which is insufficient for WI at BHTs temperatures greater than this value.

The increasing use of CRAs for long-term water injection tubing relies on minimal limited data regarding CPT and CCT and injectate composition to make costly choices in alloys. There is a need for a more comprehensive, software-based system to provide prediction of economical choices for CRAs in water injection service.

L. Scoppio and P. Nice. 2008. Material Selection for Turnaround Wells: An Evaluation of the Impact Upon Downhole Materials When Mixing Produced Water and Seawater. Corrosion 2008, Paper No. 08089, NACE.

Bruce Craig is the principal and owner of MetCorr and has more than 30 years in the consulting field as well as an instructor of university and industry courses on corrosion and metallurgy. He may be reached at bruce@metcorr.com.