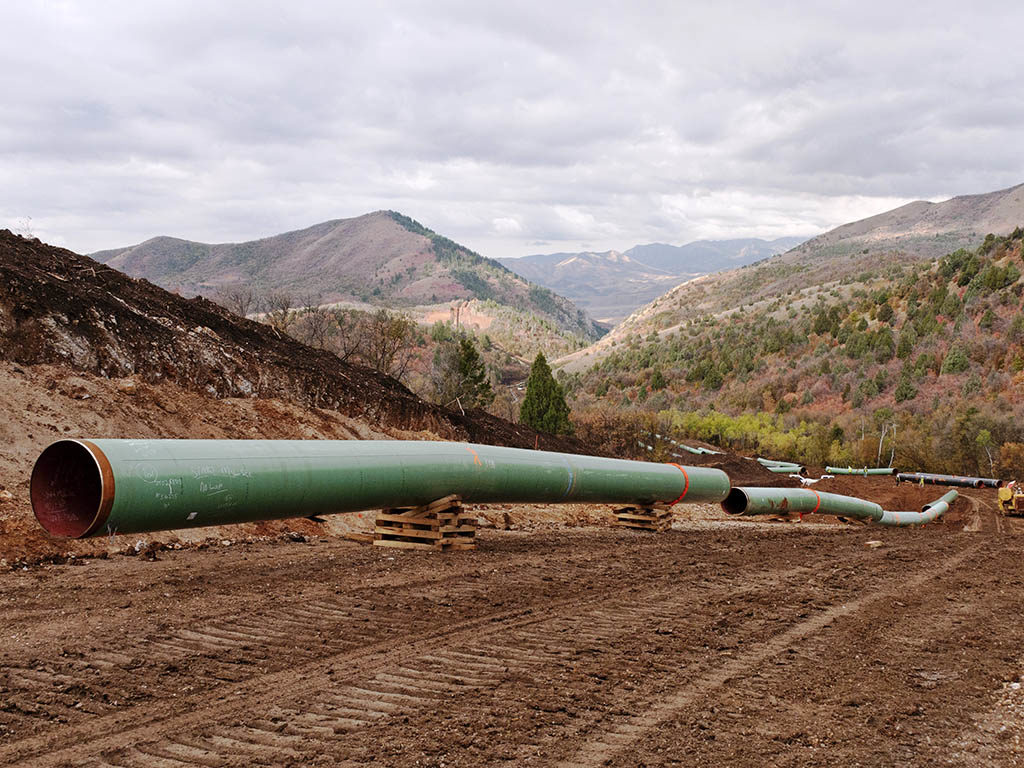 Photo courtesy of Kinder Morgan
Ruby Pipeline, owned and operated by Kinder Morgan, is a 680-mile, 42-inch diameter pipeline system that extends from Wyoming to Oregon providing natural gas supplies from the major Rocky Mountain basins to consumers in California, Nevada and the Pacific Northwest.

Pipelines play a vital supporting role in the energy supply chain as one of the most efficient modes of hydrocarbon transportation. Over the past 10 years, the increase in energy demand and strong development in the production of unconventional resources and liquefied natural gas (LNG) has set solid ground for growth in the onshore pipeline sector.

The eastern Europe/former Soviet Union (FSU) and the Middle East are expected to expand by 29% and 63%, respectively, while Asia and North America will contract by 4% and 20%, respectively. Asia will overtake North America as the largest market with 23% of total projected capital expenditure (Capex).

Activities in the midsized Latin American market are expected to see steady growth in Capex at 35%. The smaller markets, including Africa and Australasia, will experience the highest expenditure growth at 88% and 97%, respectively. From 2013 to 2017, western Europe will become the smallest market with a 9% increase in expenditure compared with the previous 5-year period.

Continual expansion in energy demand remains the most prominent driver underlying growth in the energy industry, and the onshore pipeline sector is no exception. Global energy consumption in 2030 is estimated at 16,531 million tons of oil equivalent, increasing by 35% compared with 2011. Main sources of demand growth include energy need for industrialization in emerging economies, increase in population and gross domestic product per capita, and the surge in fuel consumption for transportation.

The second key driver for market growth in the sector is the regional production/consumption balance. Asia and western Europe will continue to run hydrocarbon deficits and be the two largest energy importers, while the Middle East and the eastern Europe/FSU will run large surpluses and remain the key exporters. North America will soon convert into a gas exporter. Given the current surplus/deficit situation across regions, moving oil and gas—especially among neighboring regions—is critical to ensure market efficiency.

The global move toward gas is the third factor affecting trends in the onshore pipeline sector. Within the next 20 years, oil, coal, and gas will converge to each represent 26% to 28% of global energy consumption. The role of gas will gain importance as its share increases from 22% in 1995 to 26% in 2030. The use of oil will fall substantially from 38% to 28%. In this scenario, gas pipelines will maintain their role against liquid pipelines in the global onshore pipeline system.

Aside from the drivers accelerating the market growth, geopolitical complication and public opposition stand out as challenges causing significant delay in construction commencement and project cancellation. Increase in material prices and more stringent regulations are expected to increase the cost of building and operating pipelines. The security of pipeline poses a challenge in politically unstable areas.

Global expenditure is expected to reach USD 216 billion over the next 5 years, increasing by 12% compared with the previous 5-year period with 270 834 km of onshore pipeline expected to be installed.

Within the context of exponential increase in energy demand and a strong political agenda for energy security coming from Asia, Douglas-Westwood expects to see large producers targeting the Asian market. The eastern Europe/FSU, especially Russia, provide examples of this trend. Key projects transporting gas from the eastern Europe/FSU to Asia include the TAPI, Turkmenistan-China, and Russia-South Korea pipelines.

The use of pipes ranging from 24- to 41-in. diameter and more than 41-in. diameter will increase steadily, accounting for 45% and 31% of total kilometers installed, respectively. The trend toward the increased adoption of natural gas in the global energy mix is driving the increase in pipe diameter.

Over the forecast period, the total length of installed gas pipelines is expected to increase by 11% to reach 156 422 km, accounting for 66% of total kilometers installed. The projected growth will largely come from increased investment in unconventional resources, such as shale gas and coal seam gas/coalbed methane.

Liquid-related pipeline demand is expected to increase by 16% compared with the previous period because of the growth in natural gas liquids and ethanol pipelines offsetting the decline in crude oil and refined petroleum product pipelines.

As a small but growing market, Africa is expected to see an 88% increase in expenditure over the forecast period. Continuing growth in domestic production and the need for infrastructure to export oil and gas to western Europe are the main drivers of market expansion.

Asia is expected to overtake North America as the largest market with 23% of total projected expenditure. China and India are the two largest markets, accounting for 49% and 37%, respectively. Southeast Asian countries rank third with a share of 12%.

Similar to Africa, Australasia will see rapid growth by doubling its expenditure over the next 5 years because of the need for pipeline infrastructure to deliver gas to LNG plants.

The eastern Europe/FSU is expected to experience steady growth in its onshore pipeline market. Both pipeline construction length and expenditure will increase at roughly the same rate, by about 29% compared with the previous period. The market holds a strong position to supply market needs as energy demand in western Europe and Asia continues to grow.

Growth in Latin America is expected to be steady with a 28% increase in pipeline construction length and a 35% increase in expenditure. In contrast to the eastern Europe/FSU and the Middle East, Latin America’s activity is driven by domestic requirements. The number of pipeline projects connecting with the neighboring region, North America, is negligible.

Among the largest producing regions, the Middle East stands out as the fastest growing market for onshore pipelines. It will expand by 42% in construction length and 63% in expenditure over the next 5 years. Key drivers are rising energy demand from nearby regions, especially western Europe and Asia, and continuing growth in domestic production. The lack of political stability and security are threats to pipeline projects in this region.

The largest and most mature market, North America, will lower activity over 2013–2017. Pipeline construction length will decrease by 10% compared with the previous 5-year period. Delays in the start of construction of announced projects, such as the two controversial pipelines, Keystone XL and Northern Gateway, contribute to the slowdown in activity. However, the region still presents strong line pipe demand to build up infrastructure for production from unconventional resources.

Western Europe will experience a 20% increase in pipeline construction length and a 9% increase in expenditure. Because western Europe is one of the largest demand centers with low oil and gas production and a well-established onshore pipeline infrastructure, domestic construction activity level will be lower than the interregional level. Most of the largest onshore pipeline projects will originate from key producing neighboring regions, such as the eastern Europe/FSU, Middle East, and Africa.

Over the next 5 years, Douglas-Westwood expects 270 834 km of line pipe to be installed globally. This represents an increase of 10% compared with the previous 5-year period, which was characterized by a slowdown in order intake during 2009–2011.

Increasing gasification is shaping the long-term demand for pipes. With an anticipated 35% increase in global energy demand over the next 20 years, the role of natural gas is expected to account for 26% of total energy consumption by 2030.

Investment in new infrastructure to support LNG and unconventional gas developments will be a major factor in shaping the future demand for pipelines. Outside the major oil province of the Middle East, gas-related lines accounted for 67% of the kilometers installed over the past 5 years with this percentage expected to increase to 69% for the 2013–2017 period.

In the short term, oil-related activity will continue to attract major investment. Demand for oil lines will remain strong, buoyed by USD 100/bbl prices. The Middle East is expected to capitalize on this environment with an anticipated 17 139 km of oil-related pipelines to be constructed from 2013 to 2017.

Surging Asian demand is changing traditional supply flows. Expected to run a regional production-consumption deficit as large as 1,792 million tons of oil equivalent by 2030, Asia will overtake North America as the largest market for onshore pipelines as the region looks to increase imports of oil and gas from neighboring regions.

With traditional importers in the West expected to curb their energy demand, major new projects such as Russia-South Korea, will deliver Russian oil and gas to the growing Asian markets.

Growing demand for larger diameter pipes will have to compete with the oil country tubular goods (OCTG) sector for steel production capacity. Expected growth in demand from a resurgent line pipe sector may struggle to find manufacturing capacity, because many tubular goods producers continue to record high levels of activity supporting the development of unconventional resources in the US and Australia. Capacity additions and strategic direction have revolved around OCTG products in recent years. Supply constraint could be a potential factor in project delays over the next 5 years.

Public opposition, especially when based on environmental concerns, is another challenge causing significant delays in the approval process (e.g., Keystone XL and Northern Gateway).