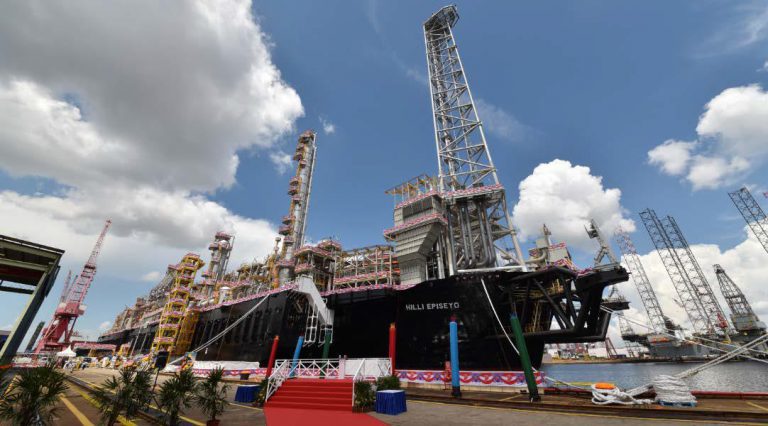 Golar LNG’s Hilli Episeyo is one of only four FLNG units in the water and operational or under commissioning as of 2018.

Floating LNG (FLNG) projects require significant capital investments, thus access to financing is a critical contributor to project sanctioning and success. Despite the FLNG liquefaction concept having been around for decades, only three units are in the water and operational or under commissioning as of 2018. Petronas and Shell, with a wealth of knowledge and experience with liquefaction technologies, ventured into balance-sheet funding and built their own FLNG facilities—PFLNG-Satu (2016) and Prelude FLNG (2017), respectively. However, due to sustained low commodity prices leading to increased pressure on maximizing cost efficiencies, other players delayed financing decisions or cancelled FLNG projects. Consequently, only one additional facility, Golar LNG’s converted Hilli Episeyo FLNG unit, sanctioned in 2015, is expected to commence operations with Perenco in Cameroon this year. [Editor’s note: Since the time of the authors’ writing, the Hilli Episeyo began production in Cameroon on 12 March.]

PFLNG-Satu and Prelude FLNG are estimated to have cost approximately $2 billion and $12 billion, respectively. As pioneer projects with no technological precedents, it can be argued that external funding was realistically unlikely considering the associated risks. Petronas and Shell, ultimately built these facilities because: (i) they could afford it, and (ii) they had direct oversight and therefore managed the commercial risks. By designing the facilities and entrusting the construction to well established contractors, technology and construction/completion risks were addressed. Additionally, country and field reserve risks could be considered relatively low for both operators in relation to the fields being exploited. Finally, both operators have experience operating LNG assets and can be viewed as the “offtakers” on their respective projects.

Golar LNG managed to secure about 80% of the construction financing for the reconversion of the Hilli Episeyo FLNG unit from China State Shipbuilding Corporation (CSSC), which will ultimately transition into a sale and leaseback structure. It is Westwood’s understanding that the financing for the Golar Gandria (Fortuna LNG) unit could also potentially come from an Asian bank/lender. In the case of Golar Hilli Episeyo, significant leverage was proffered by Chinese lenders through a construction financing mechanism transitioning into a sale and leaseback structure. At about $500/metric ton per annum (mtpa) and $682/mtpa, both the Hilli Episeyo and the Gandria units favor very comparably against the PFLNG-Satu ($1,667/mtpa) and Prelude FLNG ($3,333/mtpa).

Only Eni’s South Coral FLNG project (at approximately $1,412/mtpa) has so far managed to successfully secure project financing for about $4.7 billion from a consortium of 15 international banks and 5 export credit agencies. It is worth noting that while Eni and its partner ExxonMobil (as the LNG facility operator and a 25% equity partner in the field) have excellent credit ratings, the leverage achieved was approximately 60% ($4.7 billion out of an approximate total cost of $8 billion).

Following the downturn, it is unlikely operators will necessarily gravitate toward balance-sheet funding (as they preserve liquidity), unless there is a very compelling reason. Construction financing/sale and leaseback structure is an attractive option in situations where project financing isn’t ideal (e.g., quantum of leverage, size of project, appetite and terms from commercial banks, etc.), and project financing will potentially pursue the best credit names and sizeable projects, while paying due consideration to ECA coverage, risks associated with project location, etc.

Looking forward, there are a number of projects underway at various stages. Westwood believes that the success of the current FLNG projects should help lenders (i.e., commercial banks) develop greater confidence in the FLNG sector. While financing choices will stem from various considerations (as explained above), there is considerable liquidity in the credit markets chasing bankable opportunities. As technological risks are sufficiently mitigated, commercial risks become the focal point with external financing highly unlikely in speculative situations with no guaranteed offtake. Financing from Chinese/ Asian entities will continue to be extremely competitive in situations where the operator’s/developer’s preference is potentially for higher leverage quantums with relatively less onerous financing terms.

It is also worth mentioning the US market, which is characterized with practically no country/geopolitical risk and the world’s preeminent capital markets with significant liquidity and a deep understanding of the energy industry. Enbridge has recently acquired an equity stake in the Delfin FLNG project (four planned facilities at $1,667/mtpa), being developed by Fairwood Peninsula in partnership with Golar LNG. Golar LNG is a strategic partner, providing its Mark II FLNG design for the proposed facilities. While the Delfin project could attract project financing, Golar LNG has considerable experience with construction financing/sale and leaseback structures. The signature of memorandum of understanding for the supply of LNG with China Gas Holdings and reported discussions with Chinese lenders demonstrate that Delfin is indeed exploring various financing structures.