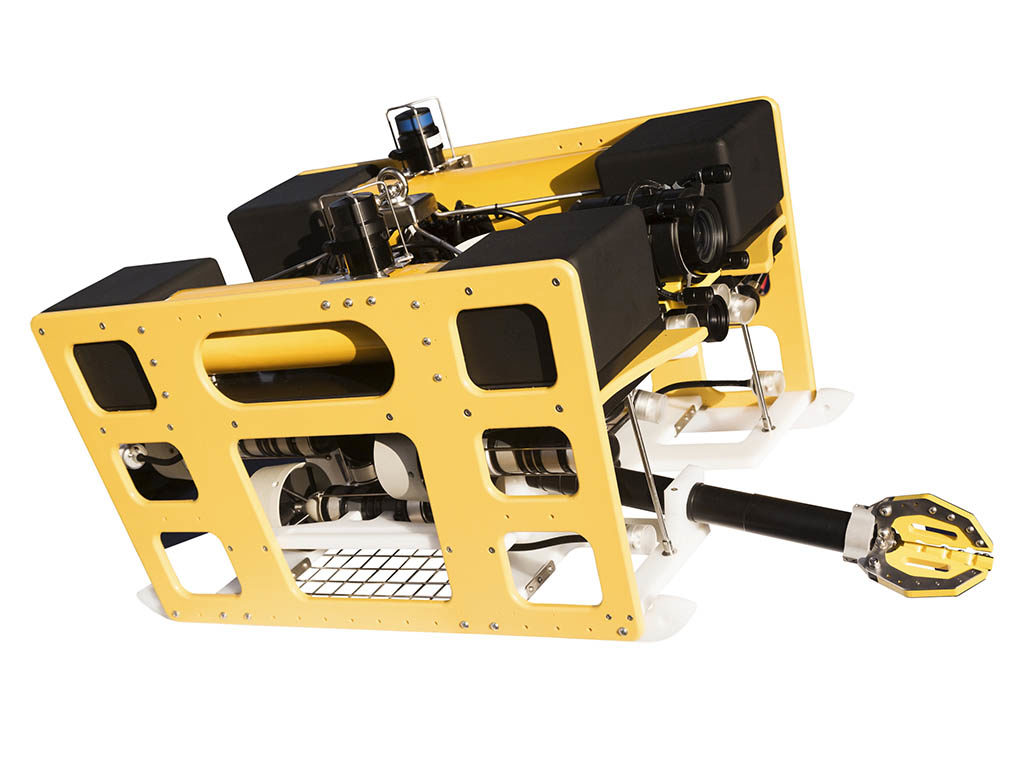 Approximately USD 77 billion will be spent on subsea vessel operations in field development; inspection, repair, and maintenance (IRM); and subsea well intervention between 2012 and 2016, an increase of 63% over the preceding 5 years. Global vessel demand for these markets is expected to increase 33% from the previous 5 years. Douglas-Westwood’s report, the World Subsea Vessel Operations Market Forecast 2012–2016, shows growth in global vessel expenditure, increasing from USD 8.7 billion in 2007 to more than USD 10 billion in 2009 before dipping in 2010. During that period, vessel contractors were largely insulated from the financial crisis that affected other sectors and were able to work off their backlog.

Subsea infrastructure and equipment is installed by vessels with specialist capabilities. Subsea wells and infrastructure require regular IRM and intervention services to ensure production rates remain high. Subsea tasks and services often involve complex and challenging engineering in difficult conditions, which is why the costs associated with subsea developments can be far higher than those associated with platform-based developments.

Field development is defined in the report as tasks carried out by vessels that can lift and install offshore and subsea infrastructure for new developments or connect additional subsea equipment to an existing production facility. The field development market is expected to see strong growth from 2012 onward with vessel-day-demand totaling an estimated 149,413 days with USD 4.2 billion of expenditure over the forecast period.

The sector suffered a decrease in activity of 5% between 2008 and 2010, a drop in 2,586 vessel-days, as operators stalled projects because of the economic crisis. This year will mark the first year of growth after that period as confidence returns to the market and operators drive delayed projects into the installation phase.

Africa and Latin America will exhibit strong demand for field development and construction vessels and will become the most significant regions, requiring approximately 10,000 and 7,000 vessel-days, respectively, by 2016. The development of Brazil’s presalt basins will be the dominant driver.

Future demand will be driven by developments in deeper waters. Oil majors have an urgent requirement to renew reserves to keep up with growing global demand for oil and gas, and the largest prospects lie in deep water.

Between 2012 and 2016, the number of vessel-days associated with deepwater developments is set to more than double with an estimated 26,223 required by 2016.

IRM includes tasks carried out on offshore infrastructure below the water line to maintain production and ensure suitable health, safety, and environmental standards are met.

Total demand for IRM vessel activity grew by 19% between 2007 and 2011, and expenditure reached USD 4.5 billion in 2011, representing nearly 27,929 vessel-days. This continuing upward trend is being driven by the growing installed infrastructure base and is forecast to be worth USD 7.5 billion by 2016, a 53% growth from 2012.

North America is the most dominant region for IRM activity because of its mature nature and the sheer volume of infrastructure in place. Over the forecast period, the region will require 25% of all IRM activity and have an estimated expenditure of USD 7.5 billion. This activity has been affected by the Deepwater Horizon accident, which has placed greater emphasis on regulators to ensure infrastructure is inspected more frequently.

The vessel demand forecast from 2012 to 2016 is expected to total an estimated 23,046 days—an increase of 132% compared with the previous 5-year period. This demand growth is driven by the realization by the major market players of the large cost savings possible through the use of intervention vessels and the subsequent increased adoption of this relatively new technology.

The last 5 years have seen an unprecedented increase in the number of new builds entering the subsea vessel market. Between 2006 and 2012, 169 vessels joined the fleet, increasing capacity by 61%, from 277 to 446.

Cyclicality has been an inherent characteristic of this market (similar to most offshore oil and gas sectors). The recent cycle has dwarfed historic new-build booms. Because of slackening demand with the economic downturn and saturation of the market, we are now in a period of oversupply.

The market for vessel contractors operating in field development, IRM, and subsea intervention is highly fragmented. Douglas-Westwood has identified 446 vessels from 83 different contractors. While there has been some consolidation in the industry with the Subsea7/Acergy merger, the vessel market is composed of a significant number of international vessel contractors and smaller regional players.

The industry possesses high barriers to entry. New competitors face the challenges of the complex nature of project execution involved in offshore developments, the requirement for highly skilled employees, and limited access to cheap new-build financing options. Additionally, operators tend to favor companies that have a proven track record and experience in completing high-cost projects.

Strong growth over the next 5 years is forecast with annual subsea vessel operations expenditure set to rise from USD 11.3 billion in 2012 to USD 20.3 billion by 2016. This growth is a result of confidence returning to the subsea industry, a move toward deep water in underdeveloped regions and ultradeep water in some already developed, and the subsequent increased demand for higher specification vessels over increased operational timescales.

By 2016, there will be a move toward more complex deepwater projects being sanctioned, and this should benefit the vessel contractors with deepwater capability and engineering experience. Deepwater awards will suit contractors with modern vessel fleets, strong project execution skills, and a strong track record in delivering such projects.

The offshore industry has been a major contributor to global energy supply for a number of decades, and the nature of this business has evolved dramatically over the past 10 years with deep water accounting for 24% of activity in 2011 compared with 6% in 2000. This trend has driven an evolution in the types of vessels required by the industry to support offshore field developments with cranes, deck spaces, and dynamic positioning systems increasing in size, complexity, and efficiency.

Over the next decade, we expect to see deepwater activity continue to account for an increasing share of demand for subsea vessels. A more imposing trend could be the expanding role that is to be played by natural gas in the offshore sector. With several high-profile, long-distance tieback projects already at the engineering, procurement, and construction stages and global demand for liquefied natural gas expected to increase by 54% by 2020, demand for vessels to install the hundreds of kilometers of flowlines and umbilicals is expected to reach all-time highs by 2016 at an estimated 17,346 vessel-days.

Another consideration is the effect of the growing floating liquefied natural gas industry on this outlook and the potential for floating liquefaction terminals to bypass the need for long-distance tiebacks in some instances and maybe reverse the kilometers of flowline/subsea tree ratio that has characterized this sector for the past 10 years. 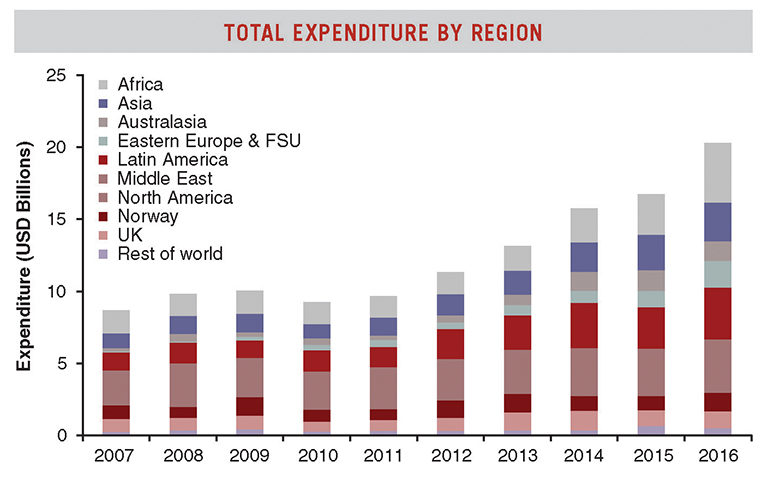 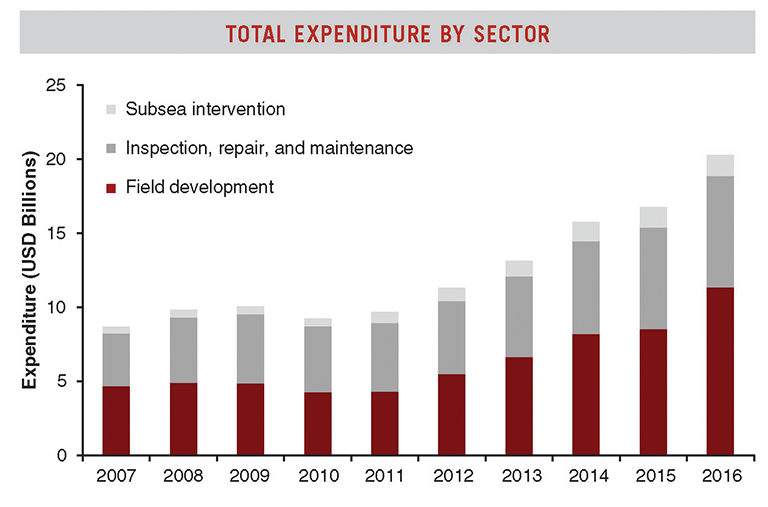 Joseph Corrigan is a member of Douglas-Westwood’s research team, where his activities include quantitative analytics and macro-economic analysis, competitive analysis, and supply chain mapping. His areas of focus include subsea vessels, offshore field development, IRM and well intervention, and subsea diving. He holds an MS degree in chemical engineering from the University of Cambridge.